So are we getting a lockdown or not?

Will the Alberta government bring in stricter pandemic measures today? That was the assurance of Premier Jason Kenney yesterday, in a long, rambling, confusing afternoon press conference.

Over the course of about a half hour on Monday Kenney decried the politicization of the pandemic and the ‘blame game,’ then pointed the finger at the federal government for not delivering enough vaccines—then teased potentially opening up the vaccines to all adults this week. He bemoaned Albertans’ reluctance to follow the rules, but rejected all suggestions from reporters that his own rhetoric or his failure to enforce the rules might have something to do with that. He argued that Ontario’s new lockdowns aren’t accomplishing anything, even though infection rates in Ontario have begun to drop since the measures were brought in. And he suggested that trying to force us ornery Albertans to follow more rules wouldn’t be a wise approach—then told us he’d be announcing more rules today.

It was an incoherent mess, so I’m very interested to see what if anything actually gets done.

Just last weekend the mayor of Bowden was begging AHS and the Alberta government to intervene and prevent a “no-lockdowns rodeo” held just outside of town. Nothing was done. But after the fact the Premier got on Twitter to complain about it, calling the event a threat to public health and a slap in the face of Albertans. True, but then why didn't AHS and the government act? (And why is he going to Twitter to scold anti-maskers and not Telegram?) A sequel event is already in the works, announced by Glen Carritt, former Innisfail town councillor and Yellow Vest grifter. 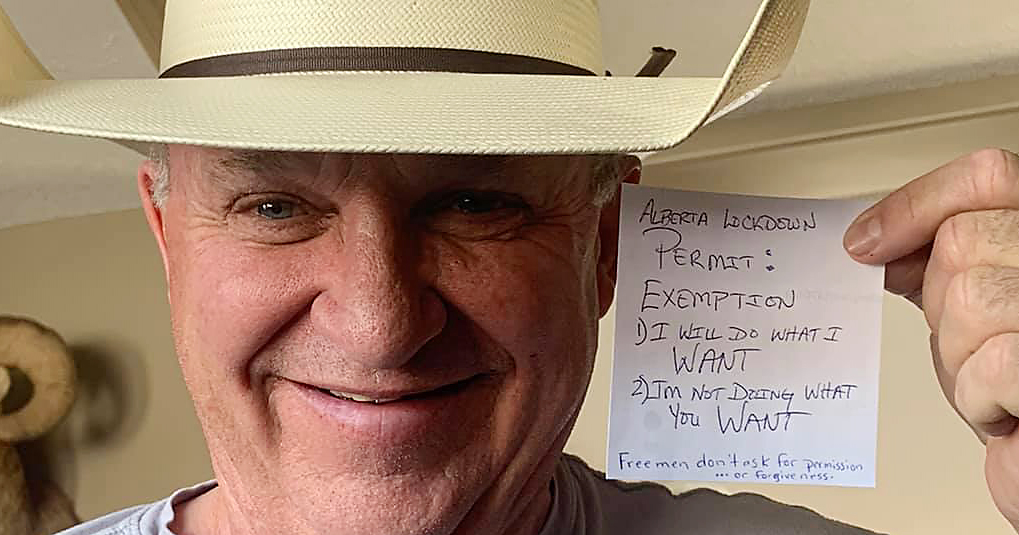 Ty Northcott was the organizer of the anti-lockdown rodeo rally held this past weekend outside of Bowden.

GraceLife’s pastor James Coates was back in the news too; his trial began Monday. The trial is expected to conclude by Friday, or early next week at the latest. Coates argued that COVID-19 is not a significant threat or even a pandemic at all (2090 Albertans have been killed by COVID-19 in the past two years, and cases are presently growing faster than they ever have) and that his position is supported by the Premier, who called it just a flu.

It’s just a real conundrum for the Premier. All these people he pointed one way won’t turn around now that he wants to go in the other direction. How inconvenient! At least his backbench MLAs will be out of his hair for a little while: there may be no COVID outbreaks in the Legislature, unlike in, say, our schools, but he’s giving the Legislature two weeks off anyway. Guess the poor guy just needed a little break.