Alberta will do only the bare minimum on COVID, says premier

You can’t have your grandma over to visit, under the new pandemic restrictions announced by the UCP government yesterday--but you can still take her to the casino.

It’s one of the many contradictions in the strange, piecemeal set of rules laid out by the Premier and Health Minister Tyler Shandro yesterday. 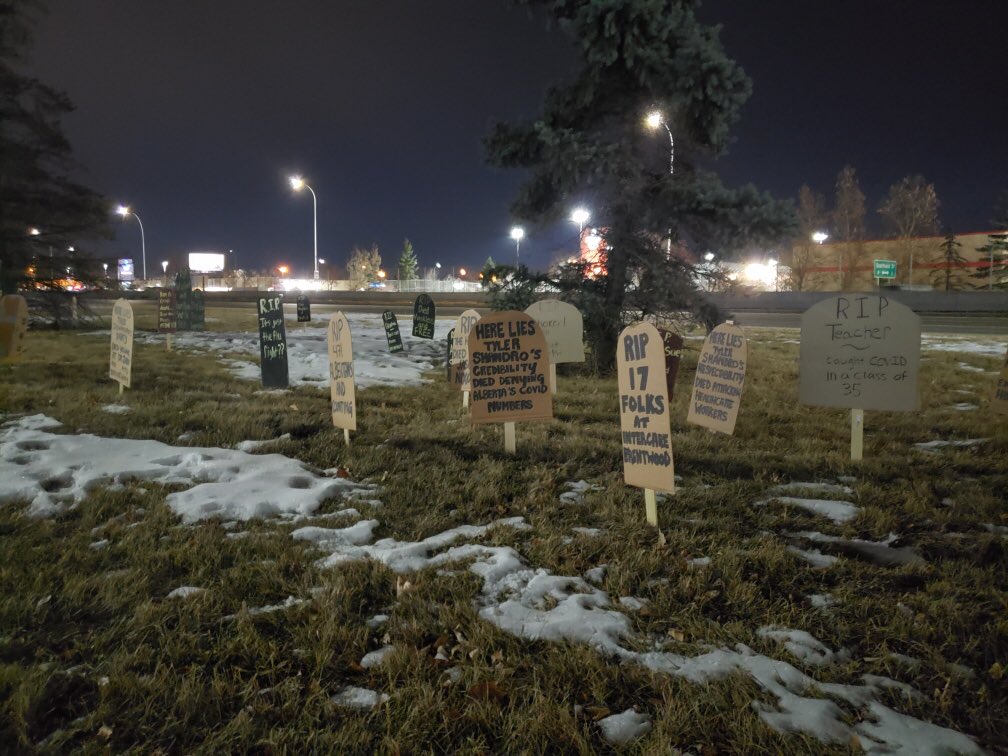 Religious services will be limited to one-third of their normal capacity--just like they were before the announcement. Masks will be mandatory in indoor workplaces--in the two big cities which were already set to enact mandatory masking, but not the rest of the province. We’re all instructed to work from home as much as possible and avoid social gatherings--again, just like we were before.

About the only announcement of significance yesterday was that schools will be moving to online learning and wrapping for Christmas break a bit early.

It’s so incredibly frustrating to watch our COVID numbers surging exponentially yet see this government shrug its collective shoulders. Jason Kenney had less to say at his press conference yesterday about Alberta’s long term care facilities, where our elders are being taken by COVID at terrifying rates, than he did about ‘socialist Venezuela.’

What’s particularly hard to swallow is this strawman game that the UCP have played since the spring whenever Albertans have demanded real action. Each time, the Premier and cabinet have responded ‘no lockdowns,’ vigorously opposing the idea of total shutdowns--yet for months, lockdowns aren’t what folks have been asking for. They’ve wanted legislated sick leave, or a pandemic benefit like CERB, so that workers could stay home without going into collections or getting evicted. They’ve wanted increased funding to our health care system to expand capacity. They’ve wanted simple, moderate measures like a few weeks of mandatory masking.

But thanks to Kenney and his cabinet cynically pretending that the only two options are to lock down everything or do nothing at all, we’re careening towards a situation where our hospitals get completely overwhelmed and the lockdown becomes the only option we have. At the rate things are going, we’ll be locking down for Christmas.

Likely to be buried in the week’s COVID news was an announcement from the government that genuinely had me excited--until I read the details.

Justice Minister Kaycee Madu announced last Thursday that carding--the process of police arbitrarily detaining people, demanding their ID for no reason, and putting their personal information into police databases--would be banned in Alberta.

This is an issue we’re familiar with here at Progress Alberta thanks to our involvement with the campaigns against carding conducted from 2017 to date by civil rights and anti-racism activists. And after four years of pushing for carding to end I was ecstatic that we might actually see it.

Sadly Minister Madu’s announcement on carding had about as much substance as yesterday’s COVID restrictions. Madu accepts the police line that ‘street checks’--the Alberta police term for these interactions--are good and useful, while carding is only perpetrated by a few bad apples who don’t follow the guidelines. (Every piece of evidence I read when we were working on this campaign says exactly the opposite: that street checks are bad policing, don’t lead to solved cases, and encourage the harassment of marginalized people by police.)

Under the new guidelines, ‘street checks’ are okay and ‘carding’ is not--which was already the official position of Alberta’s police departments who deny that their street checks are a problem. The decision as to whether an incident was a ‘good’ street check or the bad carding is left up to the police. Choosing whether to discipline officers who are caught carding is left up to the police. The information illegally taken from people over years of carding will not be destroyed. It’s a repeat of the status quo.

Later this week, we’ll be covering this issue on the Progress Report podcast--and on that episode we’re also going to dig into a wild story from yesterday, about how police in Calgary tried and failed to get a documentary film about police brutality there banned.