The UCP government has introduced legislation that if passed will update the Police Act, create a new independent oversight body to investigate complaints against police officers, and concentrate power and control of municipal policing in the hands of the provincial government.

Bill 6 this session, a.k.a. the Police Amendment Act, aims to create an independent oversight agency called the Police Review Commission. The commission would be given the authority to receive and triage, investigate and conduct hearings for complaints against police. This would be a dramatic change from the current process, where complaints against municipal police officers are investigated by police officers from the same police force. 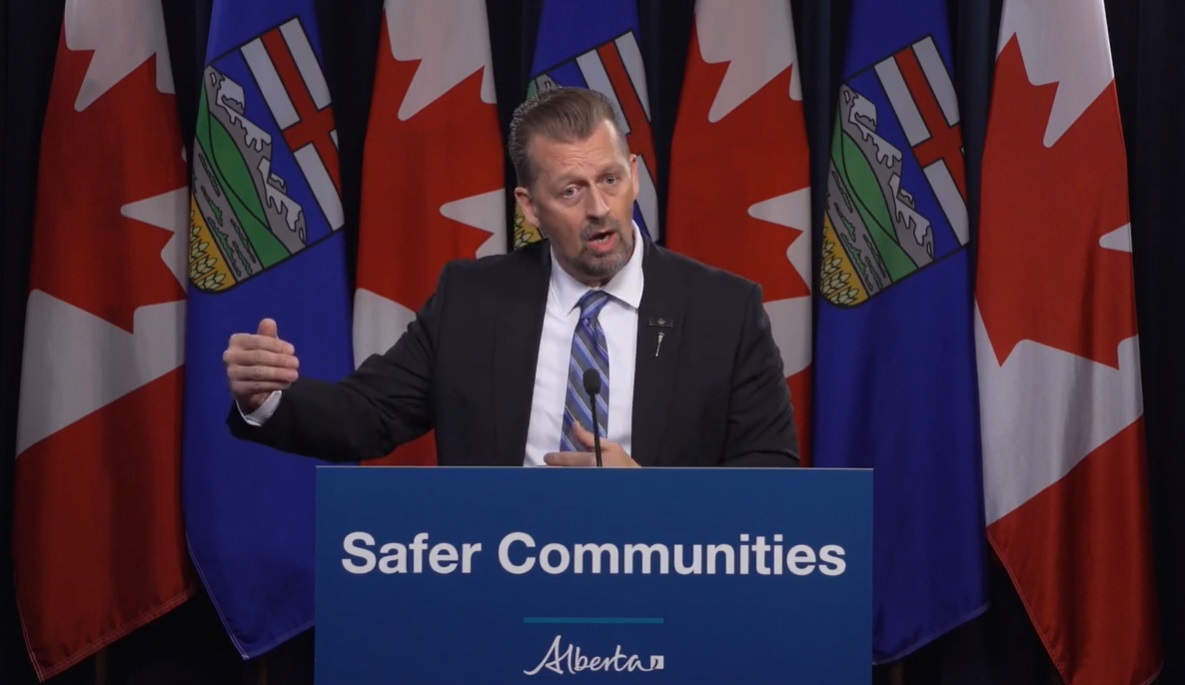 Screenshot of Minister of Public Safety Mike Ellis at the press conference where he took questions from the media on the Police Amendment Act.

Tom Engel, the chair of Criminal Trial Lawyers of Alberta policing committee, says he’s pleased with the creation of this new body to investigate police complaints.

“The CTLA has pushed for this for decades. In the Police Act Review engagement process, in which the CTLA participated, participants were unanimous on this reform—ncluding police services and police unions,” said Engel.

Temitope Oriola, a criminology professor at the University of Alberta was an advisor to the provincial government for the Police Act Review, while he welcomes several of the amendments he would have liked to have seen more.

“The proposed changes will help (e.g. requiring police services work with NGOs and other community-based organizations as part of a broader public safety plan, stipulation of guiding principles and codification of categories of officer misconduct) but its overarching approach is somewhat middle-of-the-road,” said Oriola.

“It appears former police officers would be able to serve on the proposed Police Review Commission. I had explicitly recommended the opposite in line with practices by our peer countries. I would have liked to see the minimum entry qualification raised as well as an increase in the length of recruit education and training.”

Bill 6 would put the Alberta Serious Incident Response Team (ASIRT) under the control of this new agency. The bill would also expand the mandate of ASIRT to include the ability to investigate not just police, but also peace officers in cases involving serious injury or death. It’s an area where oversight is currently lacking: one recent ASIRT investigation into the death of a man in police custody found that community peace officers were not following policy on checking up on prisoners, and two of the officers under investigation even attempted to hide that fact.

No details on costs or cost sharing arrangements with municipal police forces for this new agency were announced by the government. Minister of Public Safety and Emergency Services Mike Ellis expects the new commission to take 18 months to get up and going.

Minister Ellis equivocated on whether this new agency would be hiring ex-cops in order to investigate complaints against police officers with this new agency, saying he didn’t want to discriminate against former police officers with investigative experience. There is currently no written policy with ASIRT to stop ex-cops from the same police force from investigating their former colleagues. This is not universal practice. For example, at the Independent Investigations Office in BC you can’t investigate cops if you’ve been a cop in the past five years. At the Special Investigations Unit in Ontario, it is written into the law that investigators can’t work a case if it involves a cop from their former employer.

While Engel and the CTLA approve of the changes to internal investigations, he told us the parts of the bill that put more authority over police into the provincial government’s hands are concerning.  “It invites political interference by the province in policing, and that seems to be a trait of the UCP,” said Engel.

The most recent example of that sort of interference was in Edmonton earlier this year, where the UCP barged into a local debate over police funding that has been ongoing for years. In May, Justice Minister Tyler Shandro intervened on behalf of the Edmonton Police Service after the possibility of a small reduction to their budget was floated by Edmonton city council. Shandro used a never-before-invoked section of the Police Act to force the city of Edmonton to come up with a public safety plan on a short two-week timeline and Edmonton’s city council ended up approving massive increases to the Edmonton Police Service budget.

Chief Dale McFee of the Edmonton Police Service says he approves of the new measures.

“We are optimistic about the inclusion of provisions to mitigate politicization and manage governance disputes while maintaining the independence of policing. We welcome the introduction of a new provincial complaints agency, as a clear response to public calls for change here, and hope this new direction will provide an additional layer of public transparency and assurance that will benefit both the public and police,” said McFee.

Minister Ellis said many times throughout the press conference that no decisions have been made regarding the formation of a provincial police service.

Disclosure: Tom Engel is representing Duncan Kinney as his lawyer in both his fight to regain media accreditation with the Edmonton Police Service and for his mischief charge.