This is what it's like inside the reopened Cargill plant

The High River Cargill meat packing plant is the single largest COVID-19 outbreak from a single facility on the continent.

Hiep Bui, who spent more than 20 years working at the plant, died from the disease. The company reopened the plant the day of her funeral service.

Arwyn Sallegue, a worker at Cargill, was diagnosed with COVID-19 the same day his father developed symptoms and was sent to hospital. On May 5, Arwyn’s dad, Armando Sallegue, who was visiting from the Philippines, died.

The plant employs around 2000 people, so far 946 workers are confirmed to have caught COVID-19.

On April 20 Cargill said the plant would be closed for two weeks while it was sanitized and the facility made safer to work. Cargill reopened the plant on May 4, over the objections of United Food and Commercial Workers local 401, the union that represents the workers.

The following reporting has been compiled from conversations with High River Cargill plant workers and union employees embedded inside the plant.

When the plant first opened on May 4 and then again on May 5 the plant was not at full capacity, instead the plant was  doing the work of killing the animals and preparing them for processing. The plant has around 225-250 who typically work on slaughtering the animals. Estimates put the amount of people who showed up work on the kill floor at around 150.

Wednesday, May 6 was the true test when it came to reopening the plant.  It was that day that the majority, around 700 to 750 workers, went to work processing the various parts of the cow into things you would recognize at the grocery store. Estimates put attendance at around half of what it usually is. Whether those workers are staying away due to self-isolation, still being sick or are just fearful of returning to the workplace is not known. At least one worker that Progress Alberta spoke to is staying away from the plant until he feels safe.

Because of the staggered shifts workers started showing up at around 4:30 am. A lot of them driving themselves but some of them arriving in the new buses that Cargill has acquired to transport workers so that workers don’t have to carpool. These are yellow school buses that have been modified to have plexiglass screens on the backs of the seats and a plastic curtain down the middle. It’s loaded back to front so workers don’t have to walk by each other.

There were a handful of people who showed up to the Cargill facility but didn’t make it in to work. Anxiety took over and they went home. All workers get a temperature check before going to work and one worker got turned away and sent home when the check showed he had a fever.

Based on reports from people inside the plant Wednesday, May 6 was very much like the first day of school with people not knowing where to go. Workers’ lockers had been rearranged and spread out so that when workers come in for their staggered shifts they can still maintain physical distancing. Starting up the line was delayed. 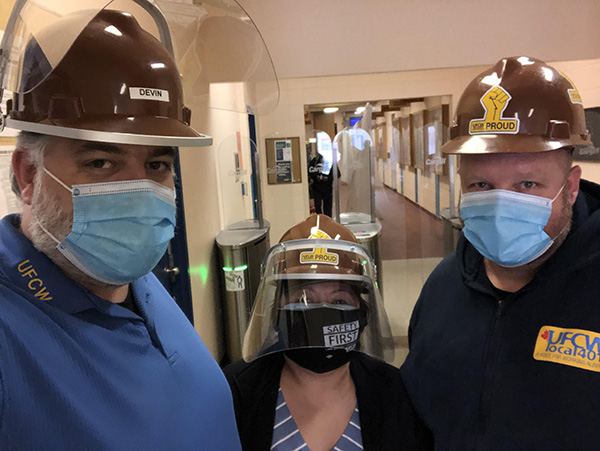 The cafeteria, which was a place that had been identified as a place where COVID-19 was possibly spread between workers, has been changed as well. There are less microwaves available to use and there are now eating stations with plastic barriers to separate the workers. The lunch breaks are also staggered.

When it comes to the work itself, cow carcasses that have been split in half hang on hooks that are moved down a line where workers with knives cut off pieces for steaks, roasts and various other cuts of beef. All the trim is reserved for the grind room to make ground beef.

Anyone who could hold a knife, including managers, was on the line on Wednesday. The speed of the line was estimated to be about half of what it typically is. It’s so loud on the line and so many different languages are spoken that almost all communication is done via a basic sign language that is particular to this plant.

Generally speaking the plant is safer than it was before the shutdown but most of the workers who showed up are still nervous but feel they have little option but to return to work. The workers are also facing stress since they haven’t been paid in weeks despite promises from the company that they would be paid during the shutdown. The pay issue is supposed to be rectified on Friday but some workers we spoke to are not confident in Cargill’s ability to figure its payroll issues out.

The union continues to undertake legal action to make the plant safer including a request on May 6 for a stop-work order with Occupational Health and Safety or OHS. That stop-work order was put in by the union because Cargill has failed to comply with deadlines to produce safety policies and procedures that the on-site OHS officer has requested.