The final session of the Alberta legislature for 2021 wrapped up this week with an all-nighter that dragged all the way into Tuesday morning. COVID, the drug poisoning crisis, climate disasters next door—there’s no shortage of reasons for urgency, but in what has become the typical fashion for this government, the last stretch of the session was all about doing things for the UCP. Or doing things for the upper echelons of the party, and especially for Jason Kenney, to be more specific, because what’s wild about this session going to overtime is that the UCP were filibustering one of their own members. 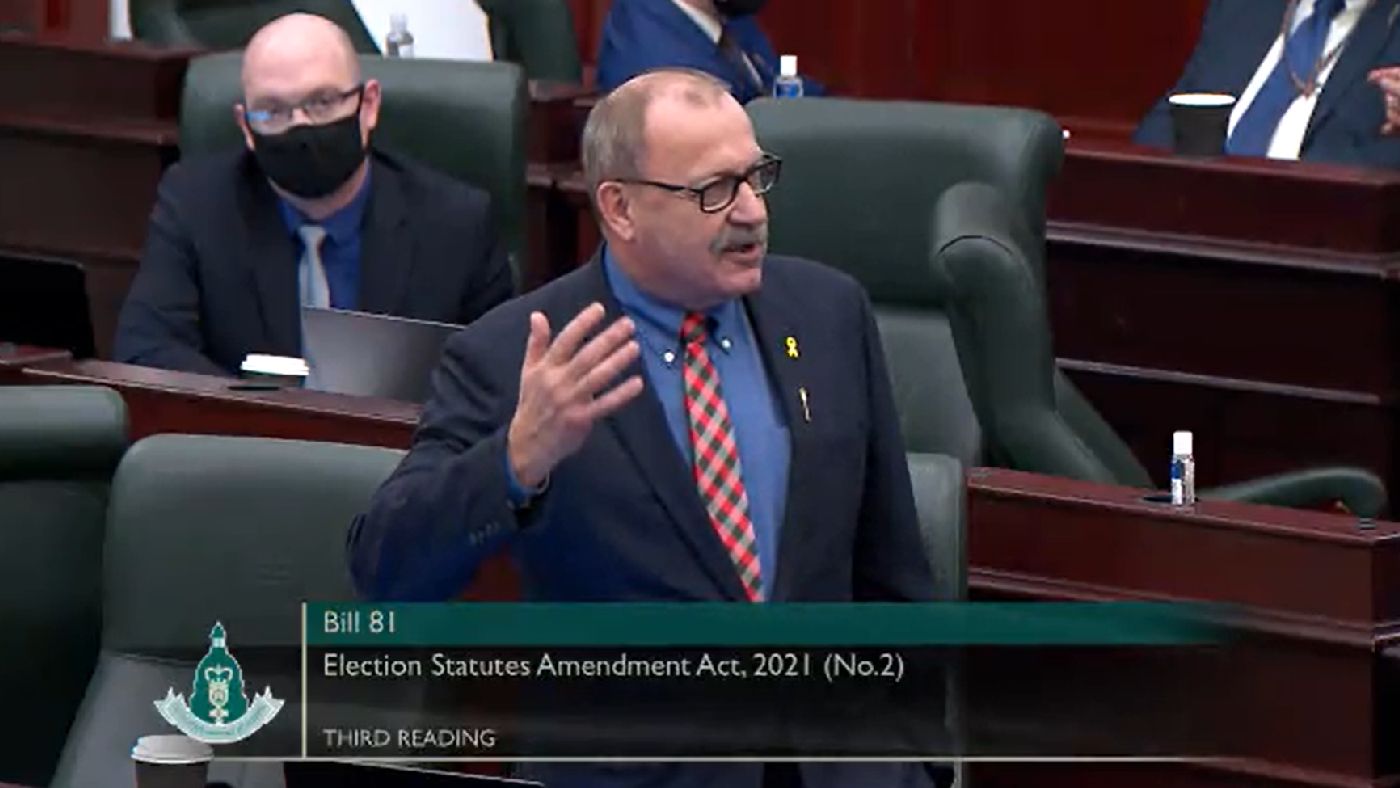 "Nothing but democracy has happened here," argued UCP minister Ric McIver, at 2:44 in the morning,
while running out the clock to keep MLA Dave Hanson's amendment from hitting the floor

Bill 81, the Election Statutes Amendment Act, is apparently what justice minister Kaycee Madu has been focusing on this fall instead of the problems at the Alberta Serious Incident Response Team (ASIRT) or the ongoing shortage of crown prosecutors, and he was sure amped up to defend it on Monday night. UCP partisans had been looking forward to this piece of legislation because Kenney and co. have been pitching it as a direct attack on the Alberta Federation of Labour. The UCP argue that because the AFL gets to send a handful of delegates to Alberta NDP conventions, the AFL should be considered an extension of the NDP, and so the AFL should not be allowed to participate in elections as a third-party advertiser.

The AFL, of course, disagrees with this argument, will likely challenge the legislation in court, and if you’re a betting person put your chips on the AFL there.

But what’s funny about Bill 81 is that while the UCP brass pitched it to the grassroots as a way to stick it to their hated enemies over in the unions, the majority of the text isn’t about this AFL matter at all. I’ve gone over this thing several times and with the exception of the two pages going after labour unions, the bulk of this legislation is about stacking the deck in favor of the UCP, and especially Jason Kenney. It’s that content that led to the bizarre situation Tuesday morning, with UCP cabinet members and loyalists droning on towards dawn in an attempt not to block out the NDP, but one of their own members.

A number of provisions in the bill open up fundraising in ways that are advantageous to the UCP and to Jason Kenney in particular, but the most contentious of the night was a rule change that would allow party organizers to buy memberships in other peoples’ names—even without their permission.

The UCP was caught up in several scandals during its 2017 leadership race and more than one of them related to this membership issue. Several people alleged that a UCP MLA had bought party memberships in their names after they brought their vehicles in for repair at his auto shop. In Edmonton, a UCP nomination candidate admitted that he had bought $26,000 worth of party memberships for other people, which he says he did at Kenney’s request. Former MLA Prab Gill alleged that the Kenney team had used people’s identities without their consent to acquire hundreds of voting PINs that were used to cast votes for Kenney.

Concern that similar skulduggery would abound in the UCP’s upcoming leadership review is probably what prompted Bonnyville-Cold Lake-St. Paul MLA Dave Hanson to pitch an amendment that would cut down on this phony-membership scheme at least a little—a requirement that, at the very least, peoples’ written permission be secured before memberships could be bought in their names. But Dave didn’t get a chance to put his amendment forward. That’s what the UCP filibustered until the clock ran out on Tuesday morning: a call from the grassroots to be just a little less sleazy. Greasy stuff.