Alberta’s corporate media wasteland got a little more bleak this week as the long-time host of 630 CHED’s morning talk radio program, Ryan Jespersen, has been fired.

Jespersen was cagey about the reason for his dismissal in his announcement on Monday, but speculation is that his Corus Entertainment bosses were swayed by a complaint from Edmonton city councillor Mike Nickel.

Last week Jespersen had referred to Nickel’s bizarre and belligerent social media content as the work of figurative chimpanzees at typewriters, an idiom most of us remember best from a classic episode of the Simpsons. 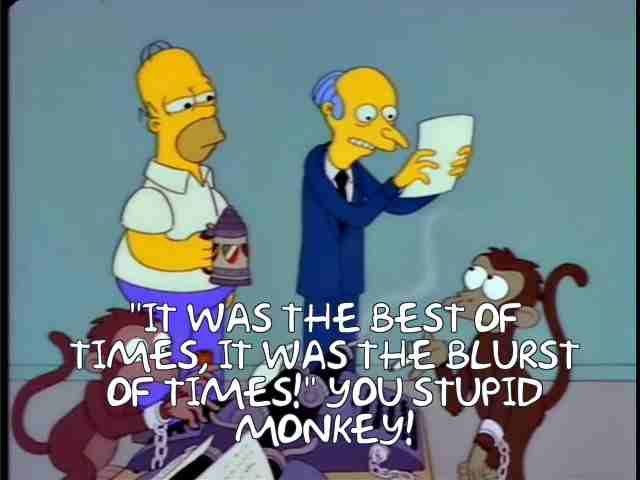 Was Ryan Jespersen canned for referencing this old Simpsons joke?

Nickel, very disingenuously in my opinion, spun this as Jespersen making a racist comment about his staff, and has been calling for Jespersen to face consequences ever since.

Jespersen was not a leftist--my estimation is that his politics were a hair right-of-centre--but his program was known as relatively neutral ground where Albertans of all but the most fringe creeds could present their ideas.

He was not an entirely unproblematic figure; I remember, for example, when he lent his credibility to Vivian Krause by hosting the screening of her anti-environmentalist propaganda film Over A Barrel--but his work was still a stark contrast to the afternoon program hosted by the overtly conservative Danielle Smith, who has offered an uncritical platform to far-right views like white replacement theory, conspiracy theories about ‘foreign funded radicals,’ and who herself has published fringe views like climate denialism and pushing hydroxychloroquine as a COVID cure. Jespersen’s replacement is broadly expected to resemble her a lot more than him.

It goes to show you just how fraught it is to rely on profit-motivated corporate owners--owners who clearly have class interests that are not in line with the working class--to provide a fair forum for political discourse. Over the last several years we’ve seen Alberta’s big corporate media platforms show the door to prominent voices that weren’t slavishly supportive of the conservative parties. Jespersen is just the latest to go.

We can’t rely on people like the billionaire Shaw family that controls Corus or the American hedge funds that dominate Postmedia to stand up for the interests of working-class Albertans--we need to build our own political forums. If you too are concerned about the corporate conservative domination of Alberta’s media, now is the time to support one of the excellent independent media projects in the province.

We could do a lot with your support as a patron of The Progress Report, the platform from which we publish this newsletter, our podcast, and the analysis and journalism from many writers that we publish on our blog.

And there are several other indie projects I’d highlight that are worthy of support too: the incredible podcast by the Alberta Advantage folks down in Calgary, the Forgotten Corner podcast by Jeremy Appel and Scott Schmidt in Medicine Hat, Jeremy Klaszus’ excellent Calgary platform The Sprawl, the Edmonton-focused Taproot, and the research over on Kim Siever’s blog.

Ultimately we can’t trust big corporations and their billionaire owners to keep us informed. But we can build what we need for ourselves. If you have the means to pitch in, I hope you can support an independent media project in Alberta today.