The Edmonton Police Service are buying a new armoured vehicle.

The Edmonton Police Commission confirmed to Progress Alberta today that a budget of $500,000 has been set aside for the purchase, which will be the third of these vehicles added to EPS’s fleet since 2007. It will arrive in Edmonton on an undisclosed date this fall.

The police have been dodging the media on this subject for at least two weeks, and refused to confirm the purchase to reporters from the Edmonton Journal earlier this month. That’s consistent with the entire process of the purchase, which was kept out of public view. The Edmonton police requested it during closed, non-public meetings with the police commission in 2017 and 2018. Details about the purchase and the vehicle do not appear in the approved capital profiles, the budgeting documents city council provides to the public.

EPS refused to comment or provide any details on their new armoured vehicle until the Progress Report goes through a process where we apply to their director of legal services in order to become a “media partner.”

The purchase of even more militarized equipment is certain to be contentious given the discussion in Edmonton around police brutality and calls from activist groups like Black Lives Matter to defund the police. But the hidden nature of the purchase isn’t being received well, either.

“The big concern I have about this is the secrecy, and how hard you have to dig to find this information… why not just say you bought it and it’s arriving at such and such a date if the decision was made years ago?” said Tom Engel, chair of Alberta’s Criminal Trial Lawyers’ Association’s policing committee.

“This kind of behaviour by the Edmonton Police Service does harm the reputation of EPS. It suggests that they can’t be trusted. It’s a foolish misrepresentation too, people are going to find out.”

According to Micki Ruth, chair of the Edmonton Police Commission, the new vehicle will replace one of EPS’ two existing armoured vehicles. Those vehicles are the ‘Grizzly,’ an armoured personnel carrier acquired from the Department of National Defence in 2007, and the Ballistic Armoured Tactical Transport (or BATT), which the force purchased in 2013. 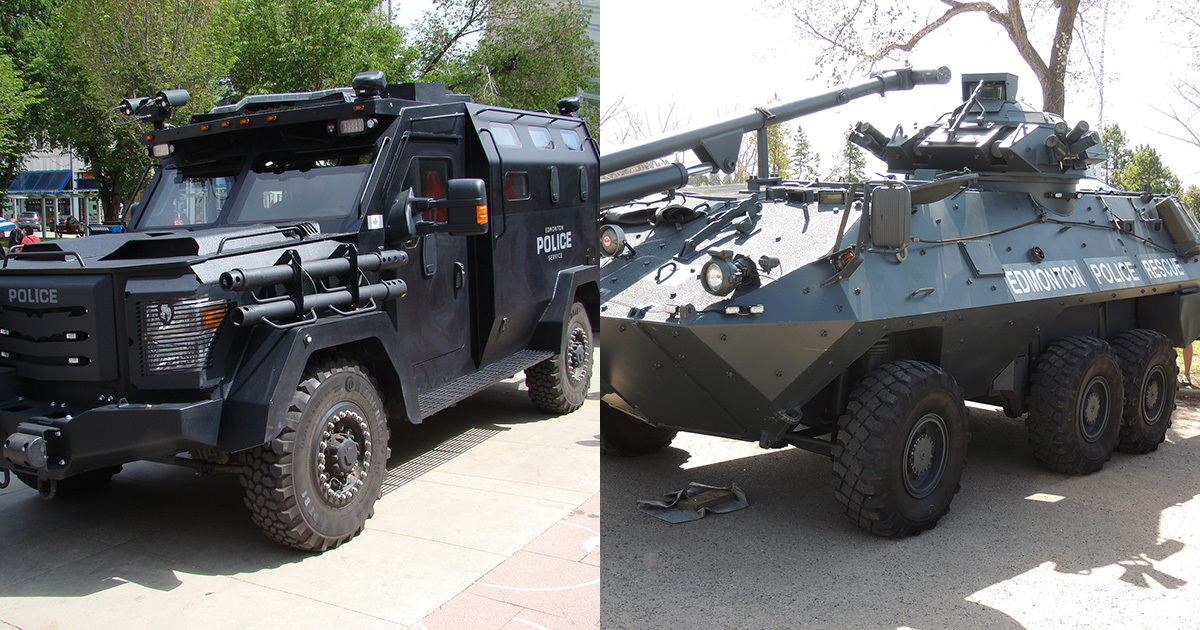 The BATT can transport a dozen police at once and has gun ports on cabin doors, side walls under horizontal windows and rear doors. The Grizzly was originally manufactured in 1978 and can carry as many as 10 officers. After its arrival in 2007, the Grizzly was refitted to remove a large machine-gun turret and repainted, at a cost of $35,000.

“If it was a new additional armoured vehicle I would probably have concerns but it’s a replacement. And I'm concerned as many people are about the militarization and use of such vehicles but the fact is armoured vehicles do have an important role,” said Ruth.

When asked why the public had no idea that the Edmonton police were acquiring another armoured vehicle, Ruth told Progress Alberta that “I don’t have a good answer… that’s something we should be reviewing.”

“It’s fundamentally unethical for the police to be getting a new tank without even providing the rationale for why they need a new tank. The fact that they don’t even have to justify it is a huge problem and then they didn’t even tell anyone anyway,” said Shima Robinson, a core team member with Black Lives Matter Edmonton.

Black Lives Matter Edmonton was at the forefront of a campaign this summer to divest a significant amount of the EPS budget and re-allocate that funding to community and social welfare programs. After receiving over 14,000 letters from concerned members of the public, and nearly two weeks of public hearings, Edmonton’s city council declined to significantly defund the department, committing to a budget reduction of only $11 million. The EPS budget for 2020 is just over $373 million.

“What we have here is a major case for defunding the police. Just a total lack of transparency about how the police are spending their money – our money. The $500,000 spent on this tank could have gone to housing the homeless, free transit, or increased funding to the Crisis Diversion Team.”

Independent journalism from The Progress Report is made possible by support from the community. If you'd like to support our research and reporting, please consider joining the hundreds of Albertans who support our work with a small monthly donation.