An Edmonton cop pointed their gun at someone or took their gun out of its holster on average two and a half times per day in 2019. 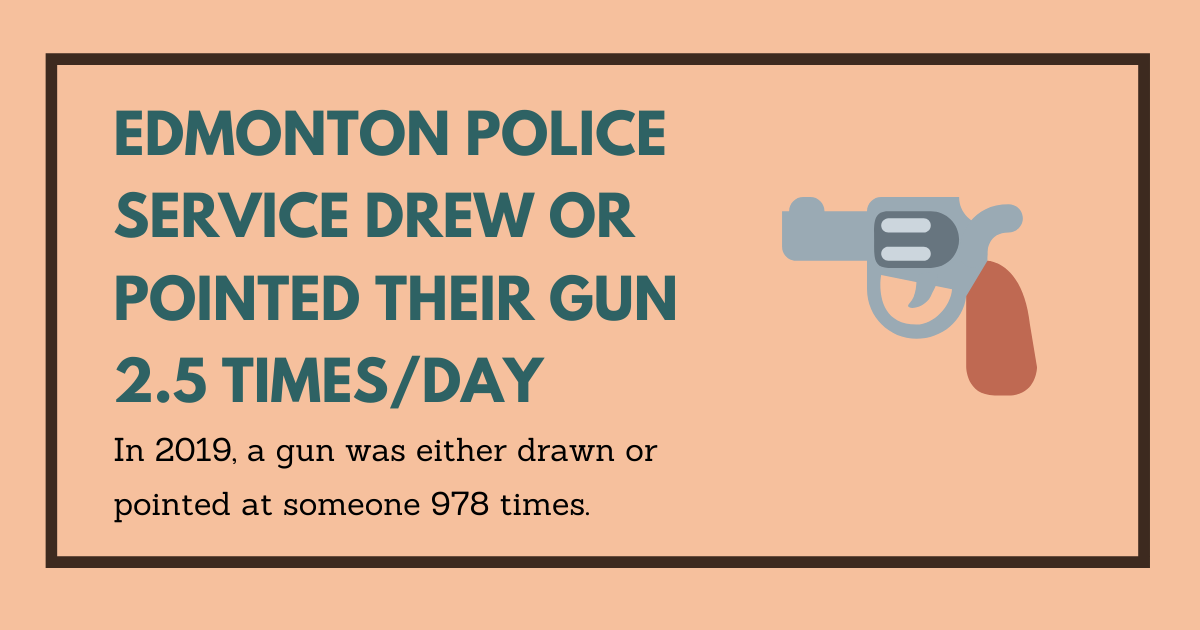 I’ve never had the police pull a gun on me or my friends and family. But I don’t imagine it’s a very safe, calm or pleasant  experience having a person with the legal authority to snuff out your life only a second or two away from shooting you dead.

So who do you think is having guns pointed at them on a regular basis? Given everything we know about the over-policing of Black people, Indigenous people, people with mental health issues and the unhoused it’s those communities who face this regular violent reality.

It is incredible more people don’t die, but tragically people still regularly do. According to the CBC investigation Deadly Force, which looked into deadly police encounters between 2000 and 2017, Edmonton police had the fourth highest overall body count of any municipal police force in Canada. More than Vancouver, more than Ottawa, and more than Calgary.

And it’s not just with guns that the Edmonton Police Service regularly inflicts violence on the people of Edmonton.

Nearly twice a day in Edmonton cops tased, threatened to tase, pepper sprayed or used their baton on a citizen. There were 693 instances of such “control tactics” in 2019. And more than four times a day Edmonton police commit bodily harm to the people of Edmonton with punches, kicks, holds or by throwing people to the ground.

Edmonton city council often passes the buck on police oversight by referring all matters to the police commission. But ultimately city council is the body responsible for funding and oversight of this hostile, violent, occupying force in our city. Since uprisings around North America started after the murder of George Floyd by Minneapolis police by kneeling on his neck until he died we’ve seen video of two similar incidents with Edmonton police.

Jean-Claude Rekundo is a Black man originally from Burundi, a construction worker and father of five who was helping out his partner after she got into a car accident in July 2018. When a newly arrived, seemingly agitated officer arrived on the scene he was told to leave since he wasn’t involved in the accident. As Rukundo was walking away an officer pulled him to the ground. The video of the incident shows Rukundo prone on the ground with two cops on top of him. His hands are behind his back and he’s clearly restrained. The cop brings his shin across the side of Rukundo’s head and holds him down with it. One of the officers says “stop resisting or you get fucking tasered.”

While Rukundo was charged with resisting and obstructing a police officer according to court records reported on by the Edmonton Journal both charges were withdrawn on Feb. 22, 2019. Rukundo filed a complaint. The Professional Standards Branch conducted an investigation where the only result  was that one of the officers was disciplined for using profanity during the arrest. Rukundo was never interviewed. We have filed a freedom of information request for that internal investigation.

And now an Edmonton police officer has been charged with assault after the violent arrest of Elliot McLeod, a member of Bigstone Cree Nation, west of Fort McMurray. Video recently surfaced of a cop holding a man down on the ground with his arms behind his back, clearly subdued. Another officer, presumably Constable Michael Partington, violently drives his knee with his full body weight into the man’s back. The screams are difficult to listen to.

The Professional Standards Branch received a copy of the video in August 2019. They charged the officer with assault on June 12, 2020 after the video started circulating online in early June. Mcleod also alleges that the officers on the video took him down a side street and assaulted him twice more while he was handcuffed, at one point with a spit bag over his head.

This is how the Edmonton police are keeping the people of Edmonton ‘safe.’ And this is why calls to defund and abolish the police are getting louder and louder and impossible to ignore by politicians. The regular violence and brutality inflicted on our fellow citizens simply can not be ignored any longer.

There are a few things you can do if you want to see change. Please share these graphics below (you can also download them from here), they really contextualize the violence regularly inflicted by Edmonton police. If you haven’t yet done so, please send your councillor an email asking them to defund the police. For more on how exactly we can defund the police, build a better society and keep each other safe check out Black Lives Matter Edmonton’s defund the police action plan. And on the Progress Report podcast, Reakash Walters and Molly Swain and I have also explored what it means to defund and abolish the police.

Our police force often feels like an occupying army, operating without oversight and impunity. But let’s remember that ultimately they work for us, under the oversight of our elected leaders. The time to dismantle this violent institution is now. Keep fighting. 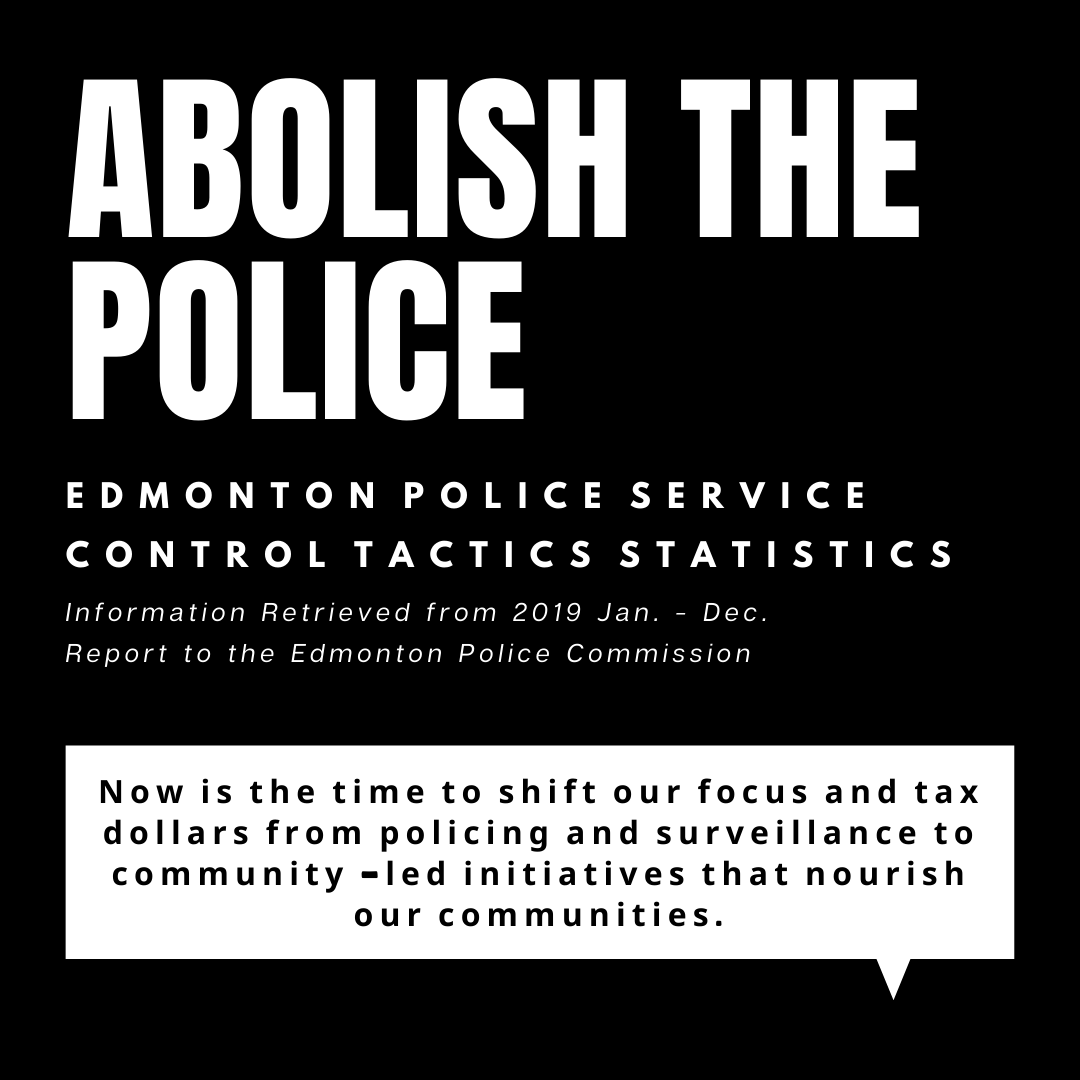 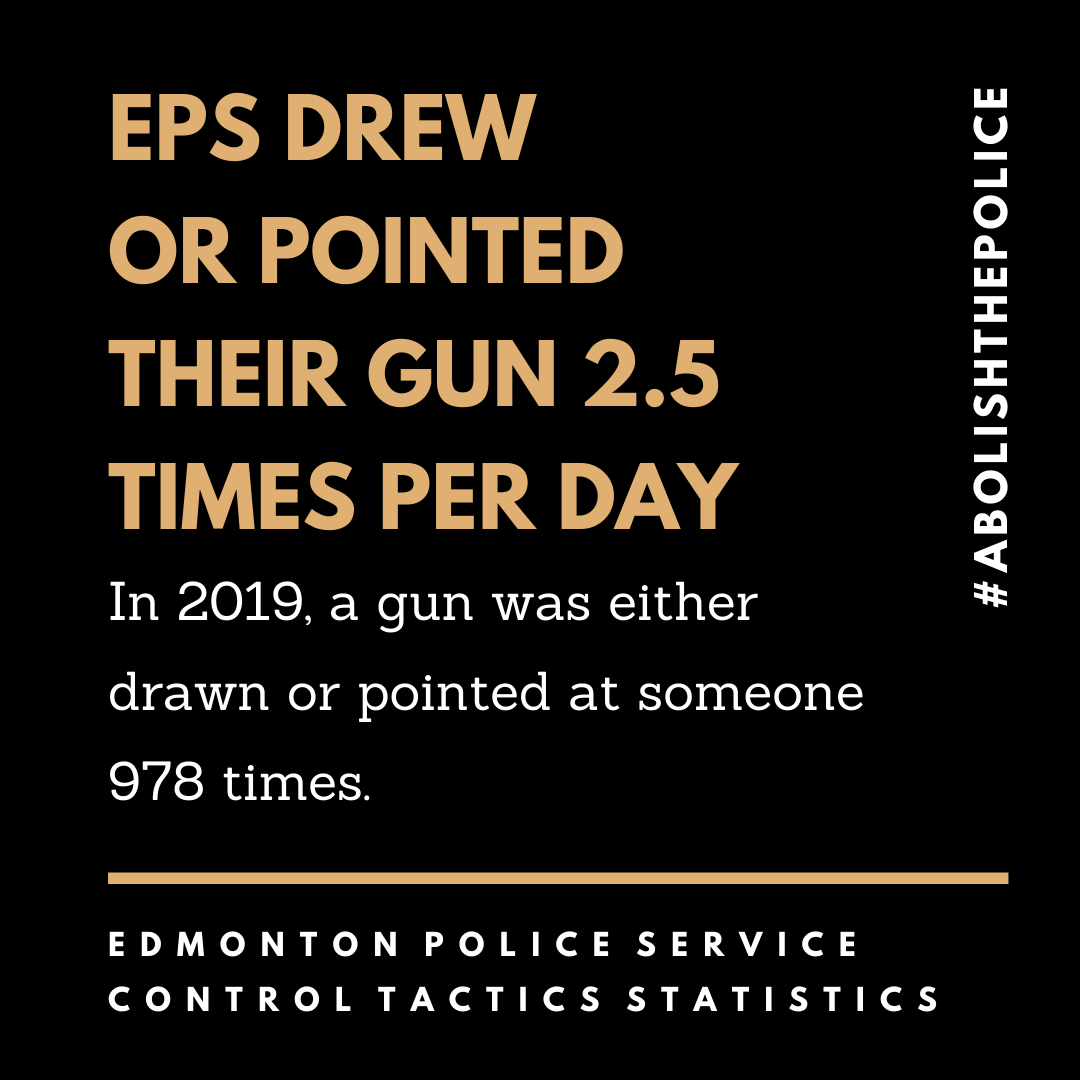 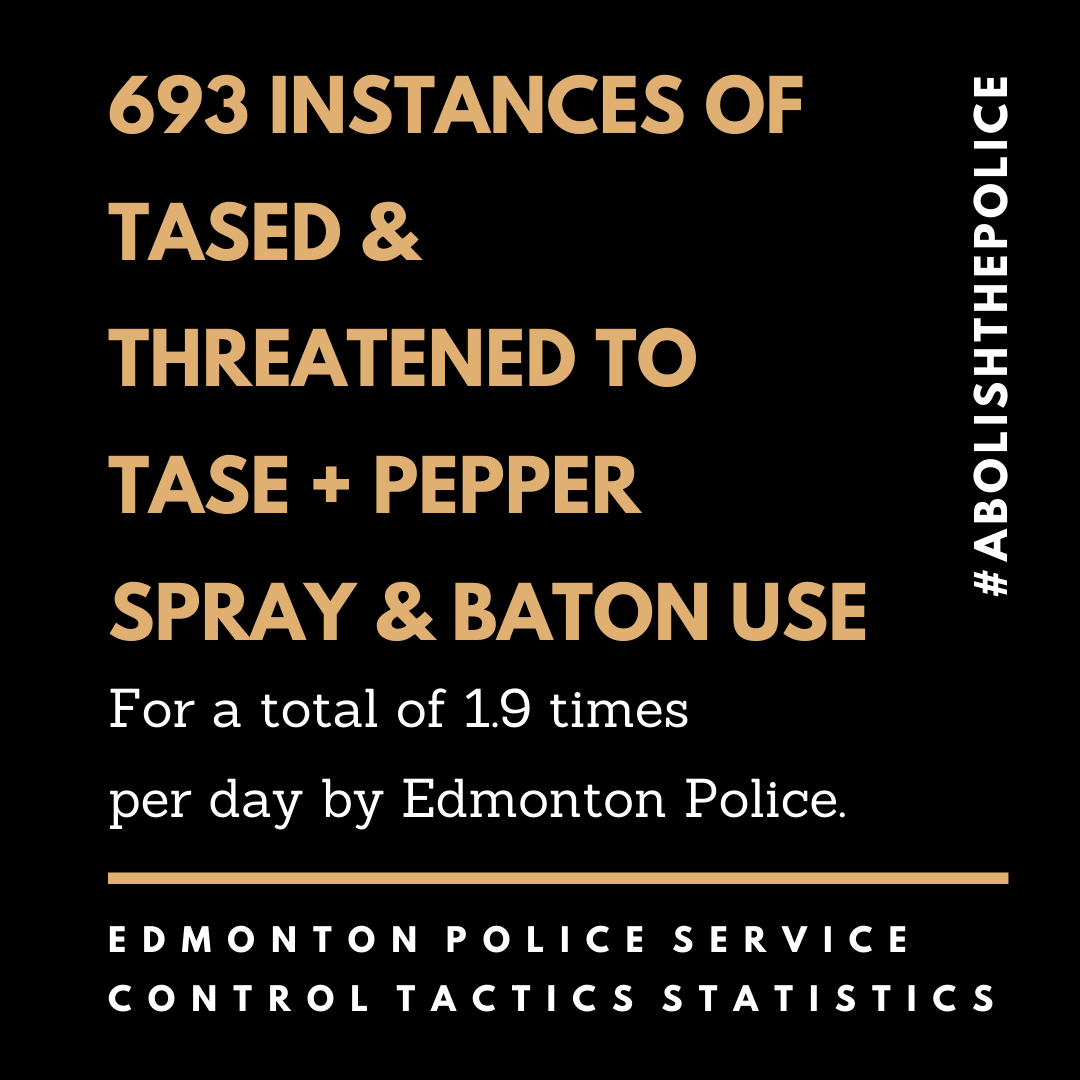 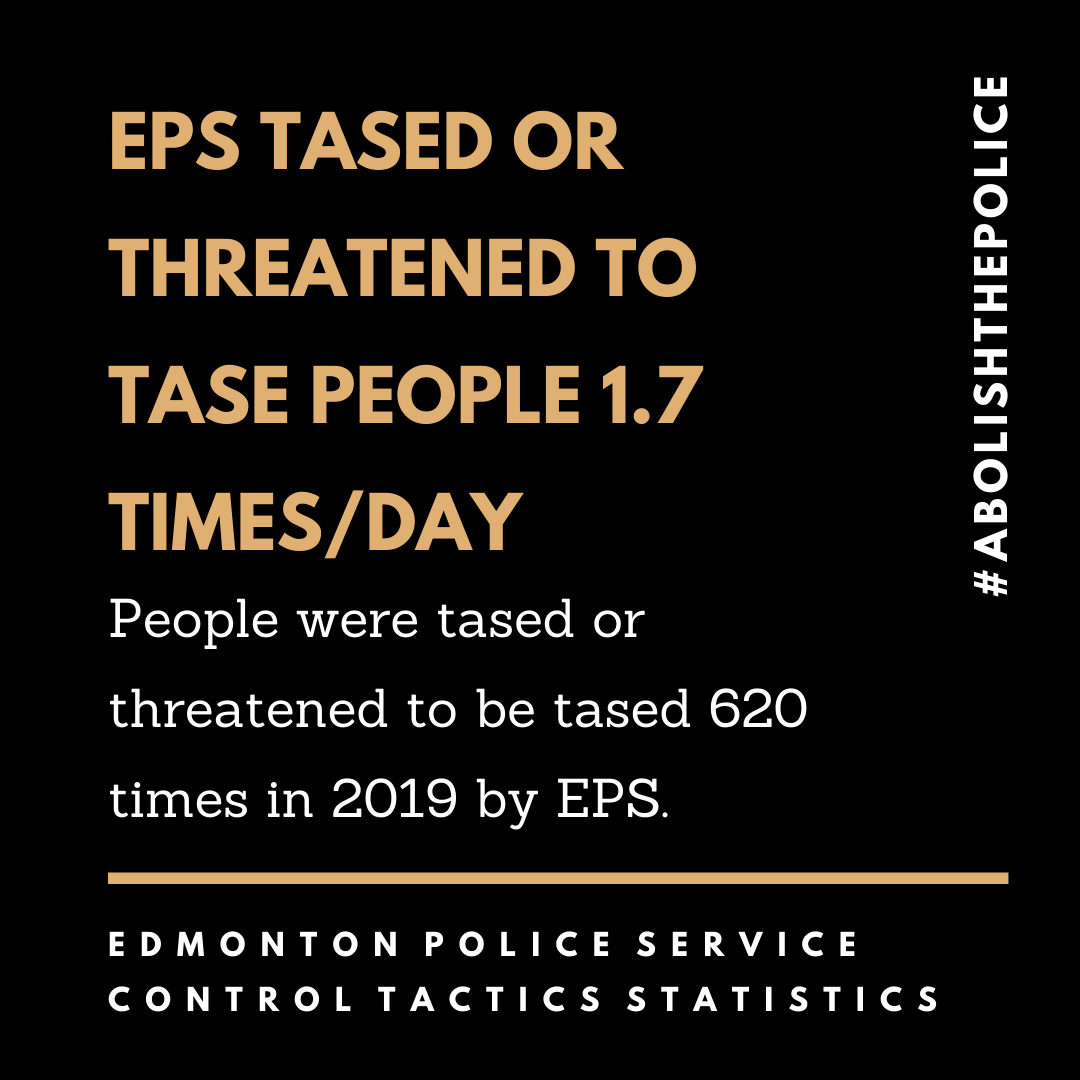 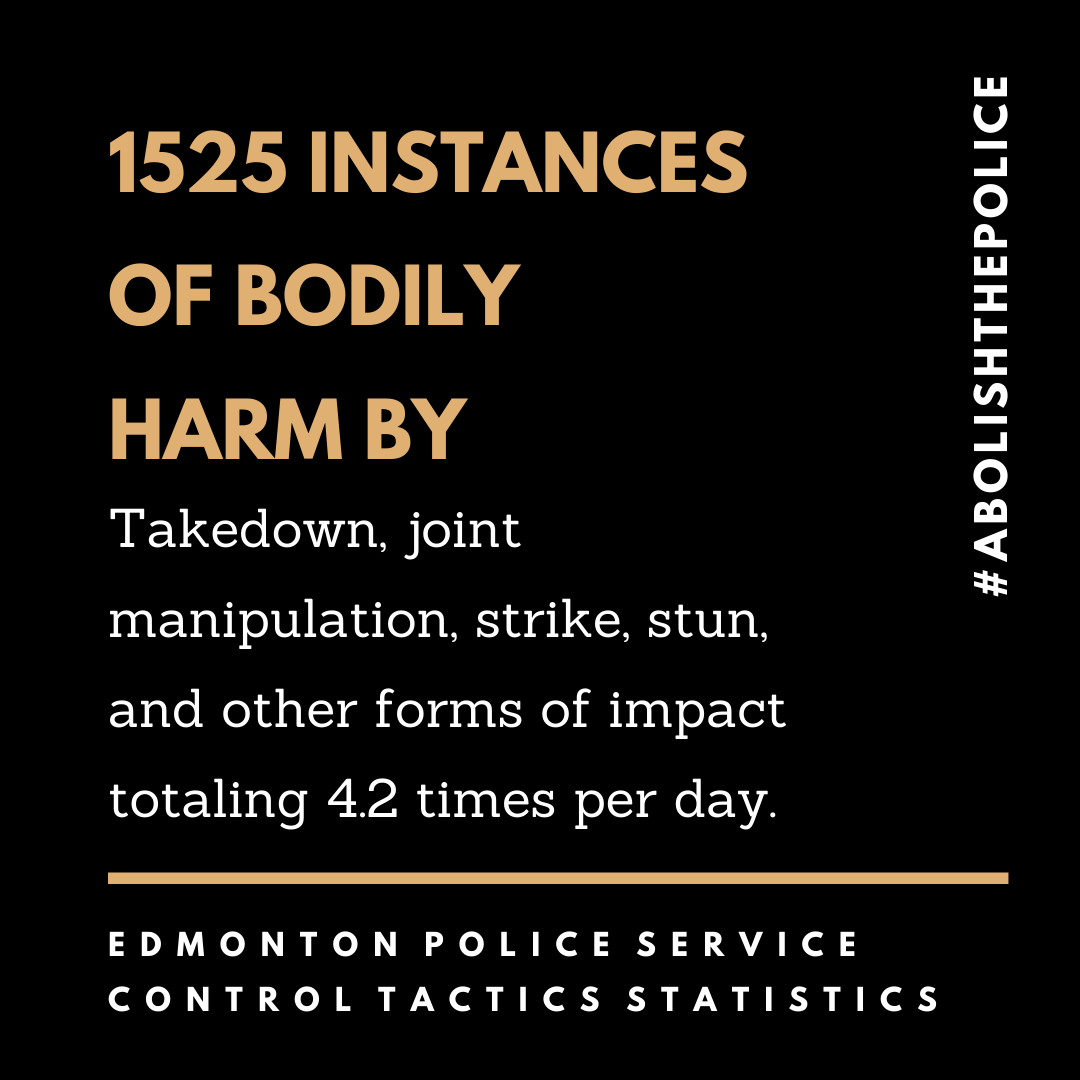