The Edmonton Police Service held a bizarre “specialized equipment show-and-tell” at an unmarked location on Edmonton’s south side showing off their new armoured vehicle, drones, a new command centre as well as carbines, sniper rifles and their less-lethal weapons.

The star of the show was the new $500,000 armoured vehicle, the Black Wolf or Armoured Rescue Vehicle 2 (ARV2). It’s an imposing armoured truck mounted on a Ford F-550 truck chassis. The armoured hull and windows can stop .50 calibre weapons according to the manufacturer and each window has a handy gun port. 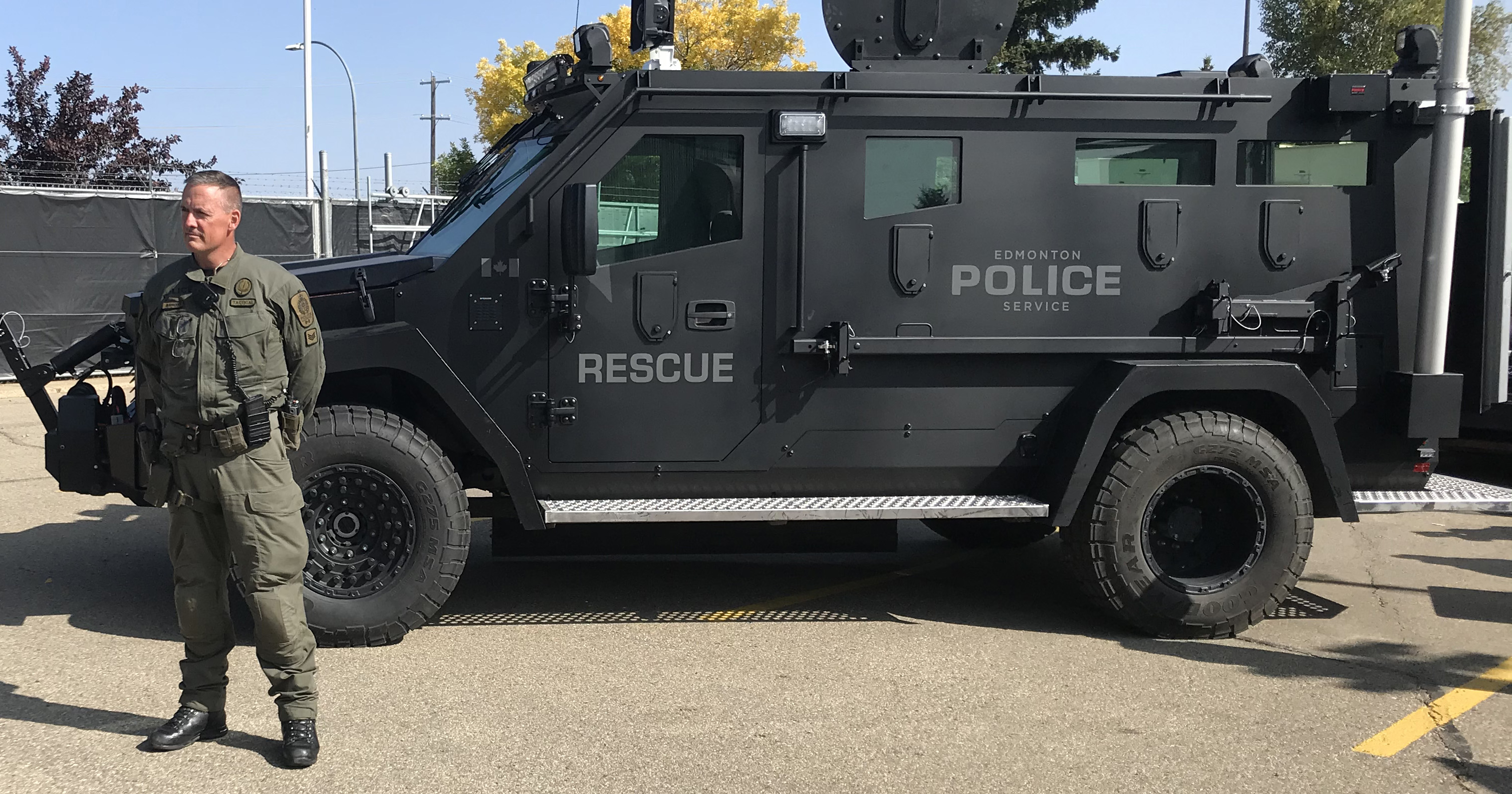 Sgt. Rick Abbott of the tactical team next to the Black Wolf armoured vehicle.

“Toronto has two armoured vehicles, Montreal has one... Why does Edmonton need two? There’s something out of whack here I think it’s indicative of a lack of scrutiny and rigour from the police commission and city council,” said Tom Engel, chair of the policing committee of the Criminal Trial Lawyers' Association.

Mayor Don Iveson, who blasted the purchase of the new armoured vehicle as “tone deaf” after we broke the story of its purchase, was caught unaware of the EPS’ new acquisition. As was the public and every single member of city council who is not on the police commission. The purchase of the vehicle never went through any public budgeting process and was never disclosed to the public.

The Black Wolf will be replacing the Grizzly, a military surplus troop carrier that was donated by the army in 2007. The police say they need the armoured vehicle in order to keep officers safe. 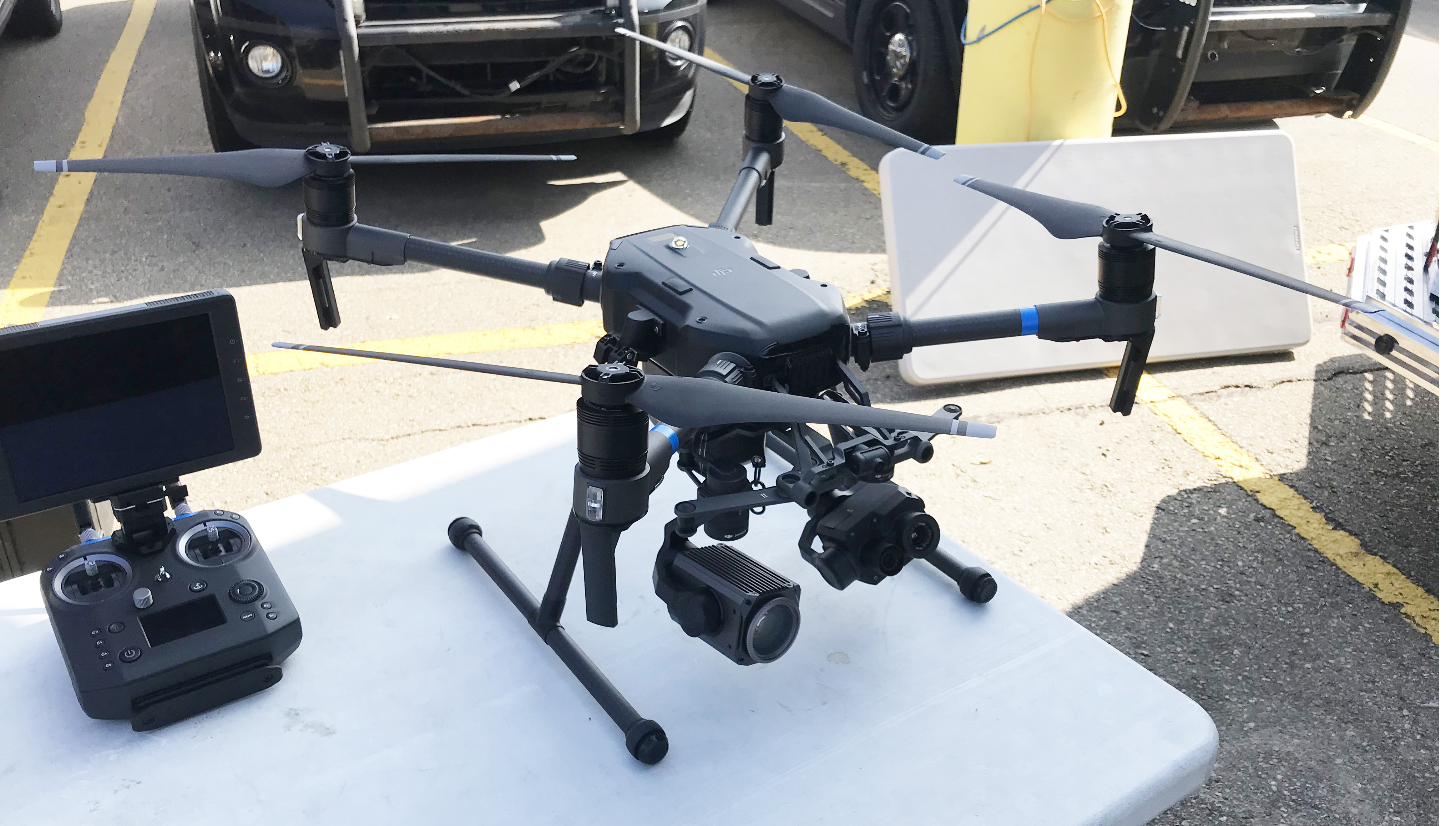 One of Edmonton's ten drones. This unit can operate in -20 degree Celsius weather.

The EPS also showed off its fleet of ten drones. The smallest are the size of a dinner plate while the largest is the size of a toaster oven and can function in -20 degree Celsius weather. The drones are all equipped with cameras and some even have megaphones and spotlights attached to them. The officer explaining how they worked talked about how another police department with the same drones used the megaphone and spotlight functionality to find an otherwise difficult to get to homeless encampment and communicated with them via megaphone. The drone does not have a microphone.

Also on display were carbines (think assault rifles), sniper rifles (the EPS has eight with four more on the way), night vision goggles and a gun that can fire both tear gas and “bean bag” or “rubber bullet” rounds. Be warned though they are not actually beanbags or made of rubber, they’re just plastic projectiles that are unlikely to break the skin but still frequently maim, disable and kill people and have been used frequently in the US over the summer by the police on protests against police brutality. 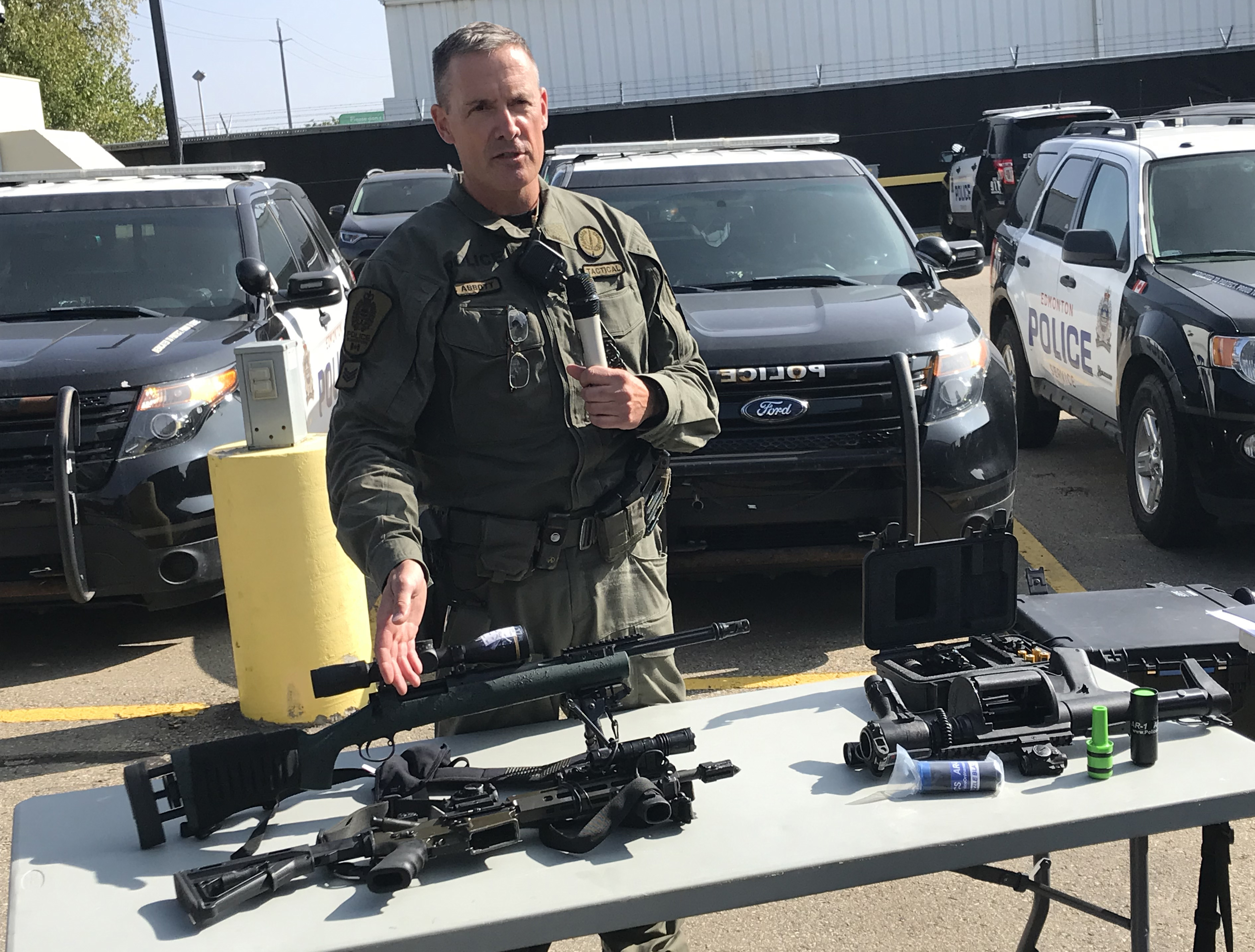 Sgt. Rick Abbott of the tactical team displaying a sniper rifle and carbine. 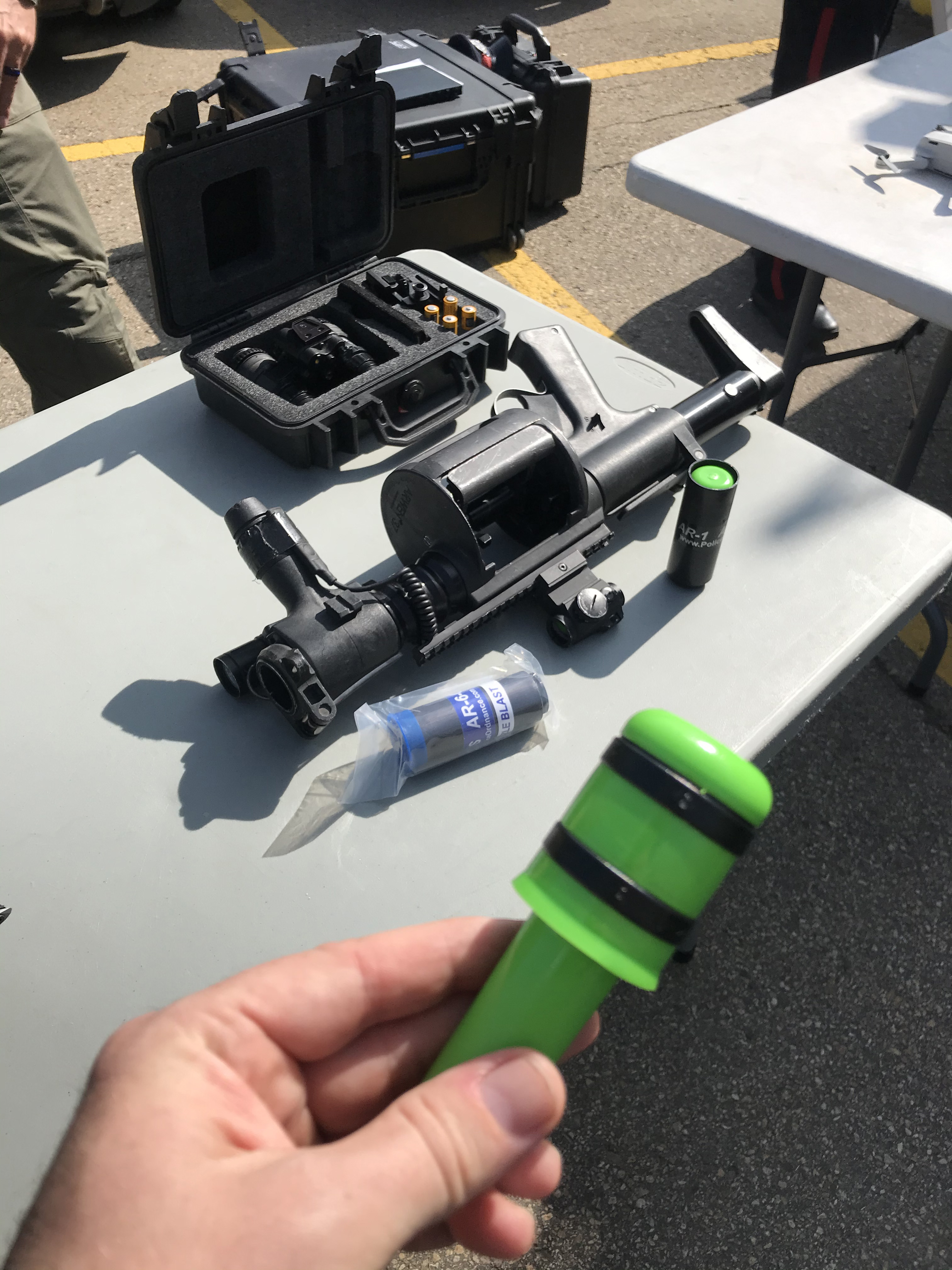 This is commonly called a "rubber bullet" or "beanbag round" on the table in the bag is a tear gas canister. Behind the gun that fires these objects are night vision goggles.

The framing of this event as a “specialized equipment show and tell” gives a bit of insight into where the money for all of this militarized hardware comes from and why there is so little public or city council oversight. In the Approved Capital Profiles in the last city of Edmonton capital budget (2019-2022) you will find a capital profile ask for “specialized police equipment” worth $6.8 million over those four years. There is no detail given for what that money will be spent on.

It’s hard to think of any other city department that would be given $6.8 million to spend on equipment with absolutely no hint of what that money would be spent on.

“I have never seen nor has city council, a cost benefit analysis on this militarized equipment. You get statements from tactical team members who are obviously biased saying they need this stuff to stay safe. Where’s the evidence? Those are the questions that council and the commission need to ask but didn’t,” said Engel.

“Equipment is expensive. We get that, we really do,” said Superintendent Dean Hilton. He justified the purchase of militarized equipment as necessary in order to keep officers safe and brushed off questions about why there was no public disclosure of the purchase of the new armoured vehicle by saying that those decisions were an internal police matter.

The Edmonton Police Service will receive $373 million from the city of Edmonton in 2020. Calls to defund and abolish the police were unavoidable over the summer at the height of the reaction to the murder of George Floyd by Minneapolis police officers. A rally organized in June saw 15,000 people in the streets demanding change. And after a two-week process that saw dozens of people tell Edmonton city councillors about their negative, racist and violent experiences with police and demanding that the police be defunded or abolished Edmonton city council cut $11 million from the EPS budget for next year.

“When you’re looking at a cost benefit analysis for this militarized equipment you’d have to look at where the funds would be spent elsewhere in the community and those needs have been articulated very clearly over the past few months and it’s not on militarizing the police, that’s for sure,” said Engel.

Black Lives Matter Edmonton’s defund the police action plan called for not only defunding the police but increased funding to the crisis diversion team, expansion of low income housing, and free transit amongst many other demands.

*Correction: The article originally had a quote that stated that Winnipeg doesn't have an armoured vehicle, it does.