The Ukrainian Youth Unity Complex in north Edmonton received more than $35,000 in 2020 through the Communities at Risk: Security Infrastructure Program through Public Safety Canada. The grant paid for a security system at the facility which is home to a statue of Nazi collaborator Roman Shukhevych who was responsible for the deaths of over 100,000 Jews, Poles, Romani and Ukrainians during World War 2.

The statue was recently vandalized with red paint and the words “Actual Nazi.” 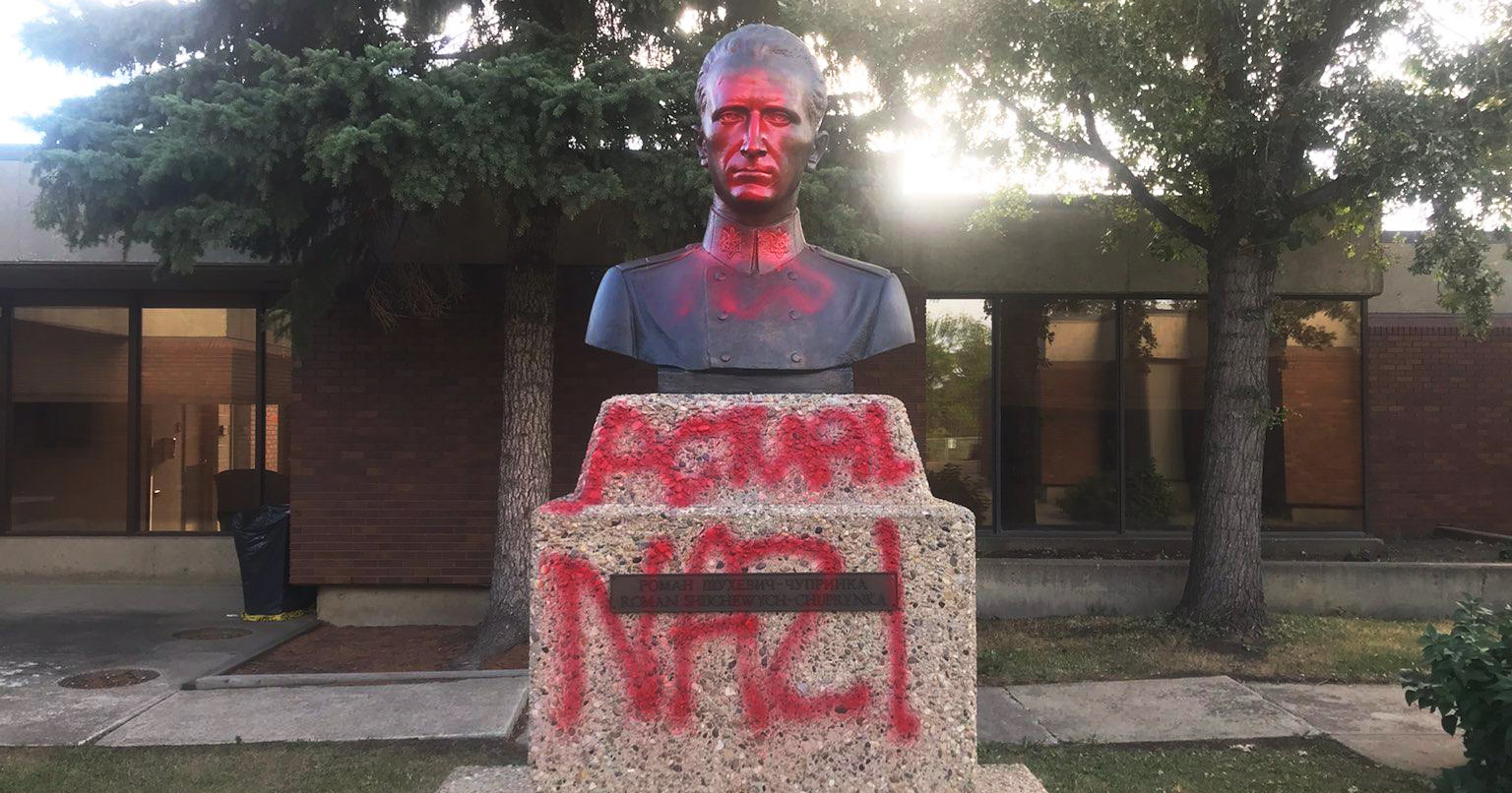 The grant was provided through a federal program that provides funding to “private, not-for-profit organizations that are at risk of being victimized by hate-motivated crime.”

According to Public Safety Canada the Ukrainian Youth Unity Complex applied for the grant in June 2019. “Upon review of their application it was determined that the organization was an eligible class of recipient under the program’s terms and conditions, and sufficiently demonstrated in their application that their community and project site was at-risk of hate-motivated crime to qualify for funding under the Program,” said a spokesperson for Public Safety Canada.

“Obviously someone at the granting institution did not do their homework. The public should not be subsidizing the cost of securing a Nazi monument. Canada fought a World War to defeat the Nazis and not surprisingly this inspires a lot of anger in Canadians,” said Jaime Kirzner-Roberts, the director of policy with the Friends of Simon Wiesenthal Centre for Holocaust Studies.

“Vandalism is not the correct way to handle that anger but there is no universe where the cost of maintaining this Nazi monument should be on the shoulders of the taxpayer. I would say Public Safety has some explaining to do here.”

"Every community has the right to be safe, and our society should constantly feel protected against acts of vandalism and other forms of property damage by our authorities,” said Marty York, chief media officer with B’nai Brith Canada.

"However, statues venerating Nazi collaborators have no place in Canada, and should never have been permitted to be built in the first place. Our government should instead be working with Polish and Jewish communities to correct this historical error and ensure that Nazi collaborators are no longer publicly venerated in Canada."

When the facility was opened in 1973 it received a $75,000 grant from the government of Alberta. And in 2015 the Ukrainian Youth Unity Complex also received more than $279,000 from the federal government in order to repair the facility. The grant was part of the Canada 150 celebrations and the announcement of the grant was attended by two Conservative Party of Canada members of parliament, one of them a cabinet minister.

“If they want people to stop spraypainting ‘Nazi’ on their statue then they should take down the Nazi statue,” said Evan Balgord of Anti-Hate Canada.

“It seems like they’re abusing a program that was intended to help vulnerable communities that are the victims of hate crimes. And they abused the process in order to insulate themselves from criticism from having a Nazi statue.”

A monument to the 14th Waffen SS Division in Edmonton was also recently vandalized. While the Ukrainian Catholic Eparchy claimed that they were working with the hate crime unit to investigate the vandalism an Edmonton Police Service spokesperson clarified that while the hate crime unit is aware of the vandalism the investigation remains with division police officers.

While a late 2019 vandalism incident of the Shukhevych statue was initially investigated as a possible hate crime by Edmonton Police it was eventually categorized as a mischief incident. After a 14th Waffen SS Division monument was similarly defaced in Oakville, Ontario in 2020 the Halton Regional Police apologized for saying the anti-Nazi vandalism was “hate-motivated.”