As statues of Christopher Columbus and Confederate generals are pulled down all over the United States in the aftermath of the uprisings against police brutality and systemic racism, Edmonton, Alberta has its own monuments to deal with.

In particular is the statue of Roman Shukhevych outside of the Ukrainian Youth Unity Complex in north Edmonton. Shukhevych was trained by the Nazis and was a commanding officer under the Nazis of military units that massacred more than 10,000 Jews, according to independent scholarship on the issue.

Shukhevych was the wartime leader of the Organization of Ukrainian Nationalists and the supreme commander of its military wing, the Ukrainian Insurgent Army, also known under its Ukrainian acronym the UPA. The statue is an oversized bronze bust at the front of the main building located close to the corner of 97 Street and 153 Avenue. In December, 2019 the statue was defaced and vandalized with the words “Nazi Scum.” 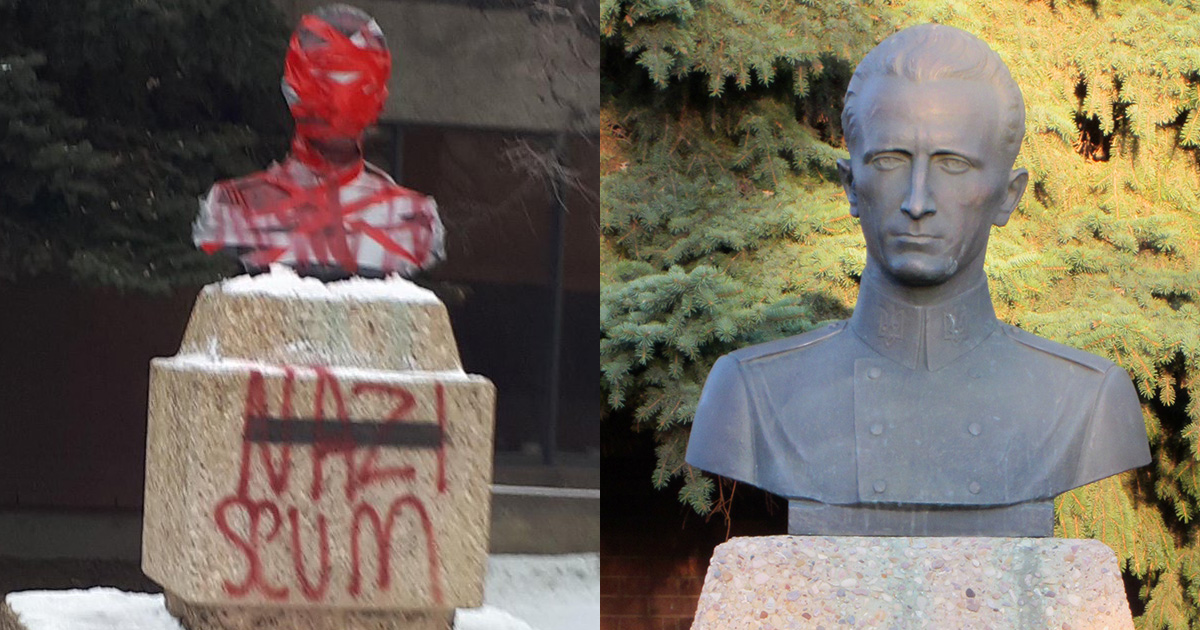 The Ukrainian Youth Unity Complex and the statue of Shukhevych were unveiled in 1973 due in large part to a $75,000 grant from the government of Alberta. The purpose of the complex, according to the Organization of Ukrainian Nationalists, was to “become a blacksmith’s forge, which will forge hard, unbreakable characters of the Ukrainian youth” and to “raise and harden a new generation of fighters for the liberation of Ukraine, ready to unite its strength with the forces of the warriors of the captive Ukraine.”

Per Anders Rudling is an associate professor at the University of Lund in Sweden. He has been studying the issue of eastern European nationalism for the past 15 years and his research has been peer reviewed and published in multiple academic journals including the Journal of Comparative Fascist Studies.

He has written two scholarly articles specifically about Roman Shukhevych and recently wrote a chapter in the book Public Memory in the Context of Transnational Migration and Displacement titled Long-Distance Nationalism: Ukrainian Monuments and Historical Memory in Multicultural Canada.

It goes into detail of both the bloody history of Shukhevych as well as the conditions that led to a statue of him being erected in Edmonton.

“Soldiers under Roman Shukhevych’s command partook in the Holocaust and the massacres of Jews,” says Rudling.

In June, 2019, the ambassadors of Israel and Poland came together to write a letter to the government of Ukraine protesting the decision to erect a statue of Roman Shukhevych in the town of Ivano-Frankisvsk in Ukraine.

“Roman Shukhevych was personally responsible for taking the lives of tens of thousands of their equals – by bullets, fire, rape, torture and other beastly methods – only because they prayed to God in Polish or Hebrew,” read the letter.

The Alberta manager of public affairs for B’nai Brith, Abe Silverman, has written on the subject of the Shukhevych statue. According to him there is no dispute about Shukhevych's role and responsibility in the massacres of thousands of Jews.

“We’re at a point now where we’re very confident that the information is accurate and we’ll proceed accordingly,” says Silverman.

“This is not an issue that is going to die without some kind of resolution. Me and two members of my team… are pursuing several avenues available to us to find a friendly resolution. This is not a disagreement between the Jewish and the Ukrainian community; we enjoy a special relationship,” said Silverman.

“It’s one of my priorities as the manager of public affairs for B’nai Brith to resolve this and to resolve it as amicably as we possibly can.”

Silverman’s request, which to this point has been ignored by the Ukrainian Youth Unity Complex, was not to take the statue down but to have the accurate history of Roman Shukhevych’s role in the murder of thousands of Jews represented in some way.

The Ukrainian Youth Unity Complex denies that Shukhevych committed war crimes and that any evidence that says so was manufactured by the Russians.

“The statue of Roman Shukhevych is on private property. He heroically led The Ukrainian Insurgent Army, seeking freedom for Ukraine from Nazi and Soviet rule and died in battle against Soviet operatives in 1950. We will not succumb to false accusations.

These accusations and recent hateful vandalism on our property are now part of a police hate crimes unit investigation,” reads the statement to Progress Alberta signed by Taras Podilsky president of the Edmonton branch of the League of Ukrainian Canadians and Irene Kolomijchuk, president of the Ukrainian Youth Unity Council.

Questions about the status of that hate crimes investigation were not answered by the Edmonton Police Service.