“I’m not surprised, even though as a citizen I’m alarmed,” said Temitope Oriola, a criminology professor at the University of Alberta. “The differential response between two different kinds of protesters is very much in line with the conservative line of policing. Their natural tendency is to clamp down on those with left-leaning ideological persuasions as opposed to those on the right.”

The documents were released in reply to a local activist, Haruun Ali’s, complaint about the Edmonton Police Service’s handling of the Freedom Convoy protests back in February. During the convoy demonstrations, EPS were roundly criticized for not taking action to enforce a court injunction obtained by the city against the convoy’s use of constant truck horns in the downtown core. Ali’s complaint argues that not only were officers not enforcing the city’s injunction, but that the officers Ali spoke to were not even made aware of the injunction’s existence. The complaint also argues that the EPS’ handling of counter-protestors who demonstrated against the convoy on February 12 was heavy-handed and militaristic, particularly in comparison with EPS’ treatment of the Freedom Convoy.

According to the released documents, EPS had heard on social media after the February 12 counter-protest that counter-protesters were discussing blocking downtown streets and potentially a railway. EPS’s Major Event Commander established an incident response plan in response. Per this plan, the Police Liaison Team accompanied by an Evidence Gathering Team would be first to engage a leader or the protestors, obtain information and deliver expectations.

“Public Safety Unit Teams would be staged in close proximity while patrol branches would be directed to send police wagons and resources to support a ‘mass arrest protocol’ if activated,” says the document.

There are no plans or any discussions in the documents, which are an exhaustive recounting of the EPS’ response to the Freedom Convoy, of any plan to mass-arrest anyone taking part in the Freedom Convoy protests. 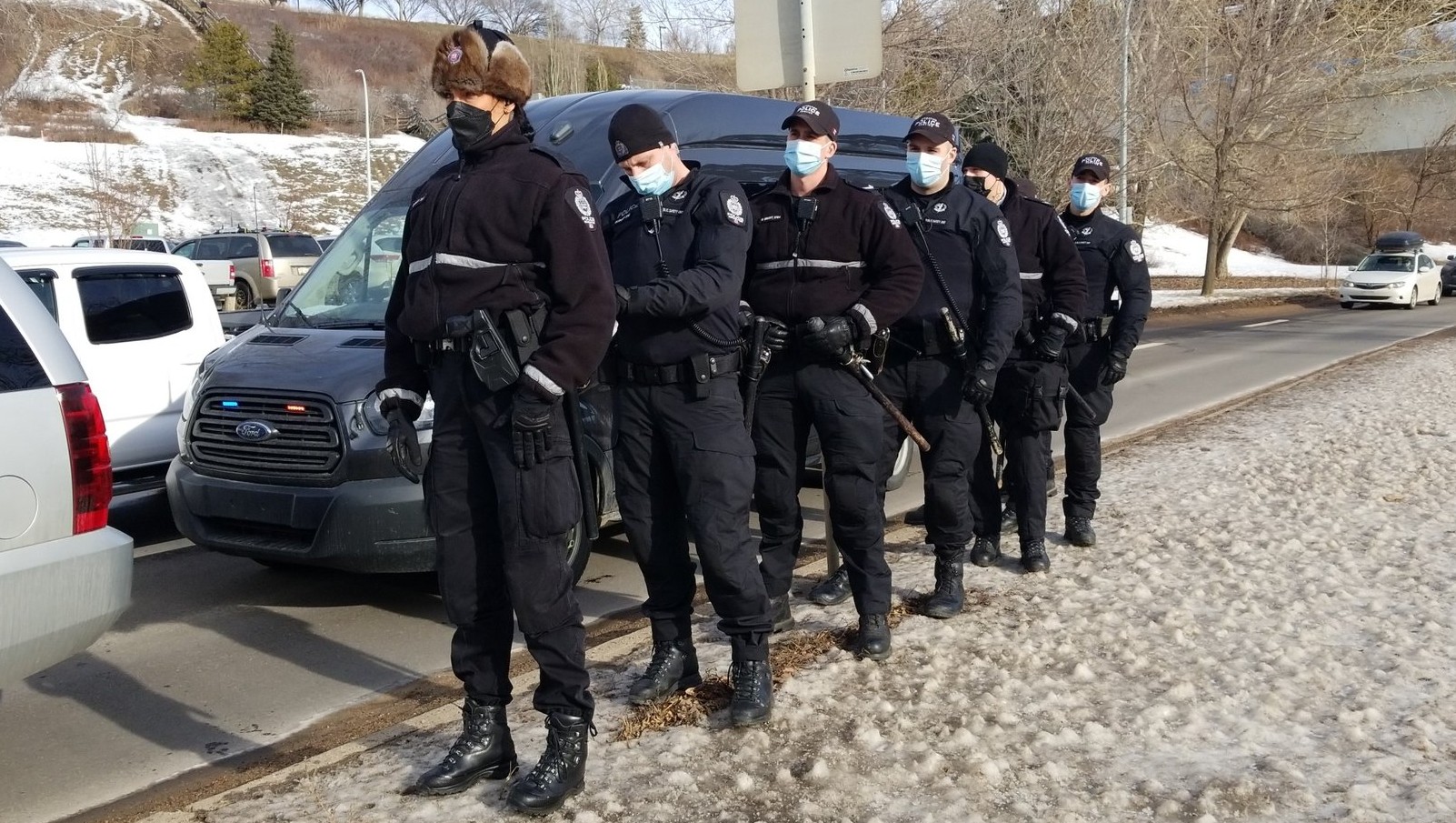 Edmonton Police Service officers at the site of the Freedom Convoy counter-protest on River Valley Road on Feb. 12, 2022. Photo via SomeCanadiaNews.

“You can’t just arrest one group and not the other,” says Rob Houle, a member of the Community Safety and Wellbeing Task Force that was created by the city of Edmonton in the summer of 2020 at the height of police protests across North America.

“But it’s not surprising that the police have plans in place for people who don’t agree with them but when you have Freedom Convoy people who might be more supportive of police they’re less likely to take action. We saw that in photos and in shaking hands with convoy drivers,” says Houle.

Some of the documents focus on Michael Janz, a city councillor who has earned a great deal of hostility from the local police lobby over his attempts to restrain Edmonton’s police budget.

“In the 35 minutes it took for this event media was on scene and a City Councillor arrived and brought snacks to the group indicating a pre-planned and orchestrated event,” alleged EPS in their internal discussions.

One comment provided by an unnamed senior EPS officer says, “one councillor actually participated in a counter protest by handing out refreshments. It was felt that political messaging may inspire further counter protest activity and create further policing challenges or fuel more protestors to join the cause or change venues in response to the media messaging.”

Superintendent Dean Hilton noted that the Chief’s committee, the senior executive group of the EPS, was “aware of Janz’ participating with the counter protest rally point for follow up with the Edmonton Police Commission if desired,” says Hilton.

The EPS appear to have drawn this conclusion from a tweet by Emma Jackson, a participant in the counter-protest.

According to the documents the EPS spent more than $164,000 on overtime on the Freedom Convoy response over the six deployments with 75 per cent of those overtime costs coming from the Public Safety Unit.

The documents disclosed to Ali and provided to the Progress Report match up with Chief Dale McFee’s dismissal of Ali’s initial complaint. The documents are replete with the Edmonton Police Service congratulating themselves on the great job they did during the Freedom Convoy and how they wouldn’t change a thing.

Ali received these documents because he appealed Chief McFee’s initial investigation where his complaint was dismissed to the Edmonton Police Commission. Ali has asked that police commission chair John McDougall recuse himself from taking part in the complaint process due to a pro-police op-ed he wrote during the Freedom Convoy protests.

Ali has until Sept. 30 to provide a response to the Edmonton Police Commission about the documents he received. The police commission should have a ruling on the complaint by the middle of October.

The EPC has not announced whether John McDougall will be recused from the complaint investigation and adjudication process. “With all due respect to the commission chair, recusal is the most ethical option in this case,” said Oriola who has written on this subject before.

The Edmonton Police Service refused to reply to inquiries from The Progress Report on this matter, once again citing the “media accreditation review” that they have been using to avoid our questions for several months.