Chief McFee was interviewed by Danielle Smith, here are the highlights

Edmonton’s Chief of Police, Dale McFee, has a habit of giving out year-end interviews. We even got one in 2020 but while he declined our interview request in 2021 he did make time in his busy schedule to speak with cryptocurrency enthusiast and recently-resurrected political figure Danielle Smith at the end of 2021.

The one hour and 18 minute long interview was streamed live on the Alberta Enterprise Group’s Youtube page on December 23, 2021 and was published as a podcast on Feb. 4, 2022. Smith spoke to McFee and his Chief Operations Officer, Enyinnah Okere about a wide range of subjects with the jumping off point being “Making Downtown Safe.”

The interview was done with the Alberta Enterprise Group, a business lobby group and think tank of which Smith is the president. The interview didn’t really do numbers when it came out and we weren’t aware of it until just recently but given Chief McFee’s political history and Smith’s recent announcement that she is running for a United Conservative Party nomination (and would run for the leadership of the party if Kenney is deposed) we listened to the interview and pulled out the important parts.

Timecode is in bold, transcripts will be italicized and summarizations and commentary will be in plain text.

9:50: McFee references the city nickname of Deadmonton, something he has done frequently in the past. While McFee clearly believes the name is a reference to murder it isn’t, it’s a reference to how boring Edmonton is.

11:11: “Words that probably aren’t the right words but something that resonates in business, how do you take a tax user that’s struggling and turn that into a taxpayer because that means they have income and they’re being successful,” said Chief McFee.

The remarks are akin to former presidential candidate Mitt Romney telling a room full of millionaire donors that 47 per cent of Americans don’t pay any taxes and are totally dependent on the government. Many people: children, the disabled, the elderly, are also unable to work and their worth to society should not be determined by their ability to generate tax revenue for the government.

13:32: “That’s exciting that you could have that level of success that quickly,” said  Smith who was effusive in her praise for McFee throughout the interview. In 2021 Smith suggested that information about the quack COVID cure ivermectin was being suppressed by Alberta Health Services and the College of Physicians and Surgeons.

13:40: Smith mentions Black Lives Matter, carding and how it sounds like the issue of carding was resolved, and mental health with a mess of a question. Okere answers.

14:18: “Thank you, that’s a very important discussion and I hope it’s one we can have with a bit of nuance because I don’t think we have over the past couple of years as a general society. Having this kind of conversation over Twitter that’s really not moving things forward,” said Okere.

Okere then goes on to tout Chief McFee’s “commitment to action” package of toothless police reforms and all of the listening that was done by the police. Throughout the interview McFee and Okere take every opportunity to slag social media and Twitter.

22:35: Okere is talking about the partnerships the EPS is developing with social service agencies. “A lot of this is built during the police discussion. So imagine me trying to talk to social work agencies saying ‘Hey, I think we should work together, I think we need to be partnered together,” while all of society and the Twittersphere is getting that algorithm going (mimes typing on a phone), showing that courage and tweeting,” said Okere.

Apparently the demand from the Black Lives Matter movement to defund the police can be entirely discounted because those demands were also made on Twitter.

29:26: “We have lots on the Twitter campaign as Enyinna articulated, that think it’s just doing more of the same. Does that make sense? If you were running a business or if you were actually  trying to make a difference in your community would you double down on stuff where it keeps going up and up? Or would you protect the things that do good work in our community, scale them up and form the right partnerships to make 1 plus 1 equal 3,” said McFee.

This is said without a trace of irony as McFee has been very clear in his support for the status quo when it comes to the war on drugs and the decriminalization of small amounts of illegal drugs.

37:38: Danielle Smith brings up the movie “Seattle is Dying,” a documentary where a news anchor turned self-professed expert advocates for locking up unhoused people who use drugs on a prison island for forced substance abuse treatment.

McFee brings up Ashif Mawji who is the chair of the Edmonton Police Foundation. He also sits on the board of Invest Alberta. Perhaps that’s where the confusion comes in but it’s never explained what the actual partnership between the two organizations actually is. Lynette Tremblay, the vice president of investor services told us that Invest Alberta does not have any partnerships with the Edmonton Police.

43:39: McFee talks about how he wants to partner with private interests in order to keep people out of the justice system. The success story McFee brings up is the collaboration with the large liquor store company Alcanna who put up $500,000 with the Edmonton Police Foundation in order to push the concept of having to scan your ID in order to gain entrance to a liquor store.

On Feb. 23, 2022 Edmonton Police officers shot a man to death who had just stolen from a liquor store. The police also killed an uninvolved bystander in his apartment at the same time.

47:43: “Everyone wants everybody to thrive and succeed in their business. No one wants to take that away. Remember, I’m a capitalist from my other life too,” said McFee. His LinkedIn profile shows that he’s been either a police chief or high level civil servant since 2003.

McFee’s eyes really light up when talking about how the market and capitalism can solve issues like housing/homelessness and domestic violence. It’s quite strange.

1:00:58: “Civil servants like you aren’t supposed to exist. We don’t normally see innovators and entrepreneurs and what I love about your approach, and I’ve written about this quite a bit, is the difference in the private sector is we start with a small company and they make little incremental changes and it grows and they open a franchise and then they expand. It feels to me like often government doesn’t want to implement a solution until they have the perfect solution that applies everywhere, 100 per cent, they got it right which means there is a paralysis that occurs. So I’m wondering if just based on your experience what kind of advice would you give to others who are in the public service so that they can take a more incremental and more trial and error attitude about things because it is very refreshing to hear,” said Smith.

McFee’s answer to this question doesn’t mention decriminalization where he and his fellow Alberta police chiefs have actually said the exact thing that Smith mentions here, that the perfect solution doesn’t exist for this problem, so we shouldn’t move forward.

1:05:16: “Government has a lot of bright folks in it but we think we have to design all the solutions. That’s problematic and it doesn’t work because it gets caught up in election cycles and everything else. One party is going to critique and criticize it. You need that basic ecosystem that’s connected in order to give the government the ability to buy success and obviously give people the opportunity to fail. And if you fail, think of all the entrepreneurs we probably know many of them have failed many times over. Matter of fact the most successful ones I know right now…they failed a few times but you know what they never stopped trying to get things right,” said McFee.

It’s not clear how an ecosystem and markets and price signals and individuals are going to solve the drug poisoning crisis or domestic violence or encampments for the unhoused. If there was money to be made in solving those problems wouldn’t the market have stepped in by now?

1:06:32: “There’s something quite unique about what you’re doing and I hope you recognize that because you don’t really see it in very many places,” said Smith. She’s gushing with praise at this point.

A question of the police budget comes up in the last ten minutes of the interview. Here’s McFee’s long answer.

1:10:30: “Edmonton Police Service had a funding formula. That’s actually one of the reasons why I was looking forward to coming here because you had the ability in what was allotted for you to actually make those changes and we made all of these changes without asking for any additional budget; it just allowed us to shift priorities.

This year however this new council has decided not to continue with the funding formula, at least for now but not only did they not continue they ended the old one so over the last two years it’s about a $21 million dollar hit for us and that’s all the things we had to absorb, COVID and everything else in relation to that.

On top of that we feel we need to change how we do community safety in our downtown because it’s not good, let’s face it, you see the clippings as much as I do. Everyone wants me to comment on it and you’re not trying to create fear or panic but at the end of the day it needs a new approach,” said McFee.

1:13:48: “The social media rhetoric. Twitter is a disaster, it’s a dumpster fire. Honestly I can’t believe what some people say here. Might be the most unprofessional way of communicating that I’ve seen and it takes its toll. As a result we’re seeing our front lines right now not taking overtime. That’s not a good sign for us,” said McFee. According to McFee, frontline officers aren’t taking overtime because people are saying mean things about the police on Twitter?

1:14:37: “When I try to present the crime stats to [city council] it was almost like it didn’t matter and I know that’s not the case but that’s a different beast that we’re going to be tackling,” said McFee. He appears frustrated the city council isn’t listening to him.

Smith then talks about how politicians might make the calculation that because crime is going down that they don’t need to fund the police as much. Okere then jumps in.

1:15:16: “Imagine investing in your business and you’re starting to see dividends from said investment and this is positive and because it’s working I’m going to stop. It doesn’t make sense.” said Okere

With this logic police budgets go up whether crime goes down or up. Convenient. 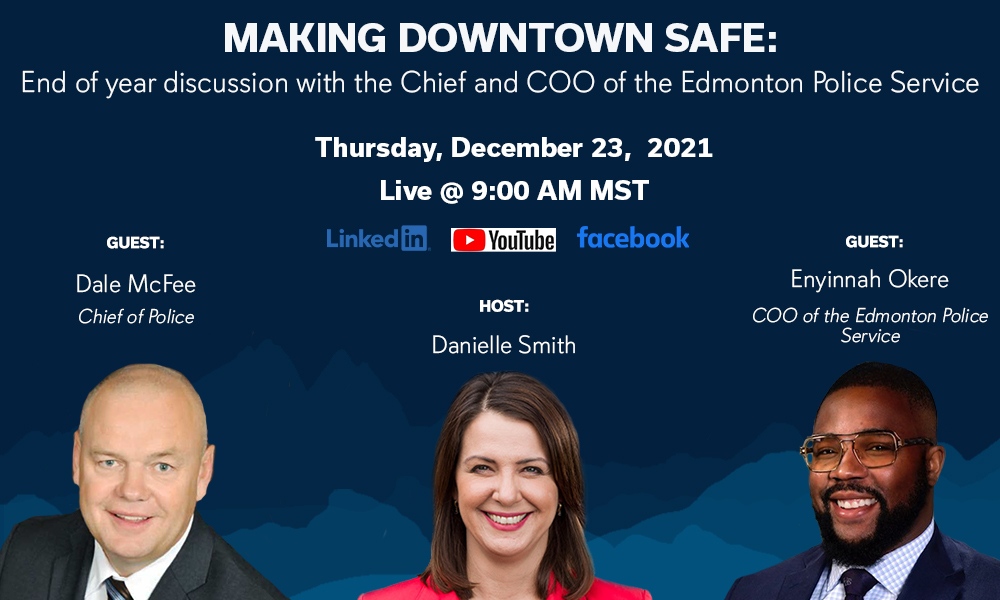