A UCP wracked with in-fighting has found a nice unifying issue to come together around: a federal gun buy-back program brought in by the Liberals to scoop up assault-style firearms that were banned in 2020.

Last week justice minister Tyler Shandro held a press conference where he announced that Alberta won’t be “participating” in the federal government’s gun buyback program, that it would be challenging the law in court and that it would be asking the RCMP to not enforce the law.

When politicians start seriously talking about ignoring the laws they don’t like we’re not that far from things getting bad.

Something that makes the situation even worse is the degree to which the UCP are whipping people up with false stories. The federal buy-back program isn’t a mass round-up of all the guns in the country. It’s a buyback program for very specific assault-style guns, that could only be shot on ranges under strict storage and transportation rules in the first place—before they were prohibited over two years ago.

Shandro had to watch his words to avoid sounding too much like he was cribbing from Danielle Smith’s Alberta Sovereignty Act. But it didn’t matter.  After the announcement Smith was quick to suggest Shandro's approach is “closely aligned” with how the ASA would work and that she would have a vote on it.

I’ve said it before and I’ll say it again, Smith will just be carrying on Kenney’s political project just with more carelessness and recklessness. Smith has a proven track record of sending the organizations she’s running into the sewer.

It seems everyone has forgotten about her time on the Calgary Board of Education which was so dysfunctional that the Tory education minister at the time fired her and every other trustee. We all know what happened with the Wildrose Party and now she’s back for a third crack at politics where surely things will go better this time.

From a young age Smith has been tapped as a political leader but while she might be an effective propagandist and mouthpiece with certain audiences she struggles when at the helm of a political machine.

The new UCP leader will be decided shortly, Oct. 6, and it’s probably going to be her, so let’s hope she keeps that failure streak going.

The competition between the UCP candidates has been so stagnant that this week I’m instead ranking the top 7 deep cut Danielle Smith gaffes, scandals, and wacky incidents. And if you want an excellent deep dive that goes into Smith’s history I recommend the latest episode of the Alberta Advantage.

While the overwhelming dysfunction of the CBE that led to the firing of all the trustees was a group effort Danielle Smith was instrumental in making it a reality. Dave Cournoyer has written the authoritative wrap-up of that affair.

Smith has been back and forth between politics, the media and conservative think tanks her entire adult life. Given the Fraser Institute milieu in which she was raised it is unsurprising that in 2003 she wrote a column for the Calgary Herald (where she ended up after the CBE affair) titled “Anti-smoking lobby does more harm than good.”

In the column she extolled the health benefits of a daily dart. “The evidence shows moderate cigarette consumption can reduce traditional risks of disease by 75 per cent or more,” Smith wrote. “Shouldn’t smokers be told?” Press Progress has the details.

Being on the radio for hours on end does mean you end up running your mouth in bizarre directions. One time Smith said maybe Alberta should look into annexing Prince Rupert, B.C.

Back in 2020 Smith deleted a pile of tweets she posted that made some incredibly incorrect claims about the effectiveness of Donald Trump’s favourite COVID cure, hydroxychloroquine.

After reading that Smith argued for cigarettes and horse medicine, maybe you won’t be surprised to hear she’s into funny money. Smith is a big advocate of cryptocurrency, has invested—and lost money—in it, and trucks in some pretty wild conspiracy theories about central banks when she talks about it

Danielle Smith scabbed for Conrad Black during the extremely contentious 1998-99 strike at the Calgary Herald. If you’re in the labour movement and you’re talking to other people in the other labour movement about Danielle Smith the first thing and the last thing out of your mouth should be that she happily crossed a picket line and helped break a strike. 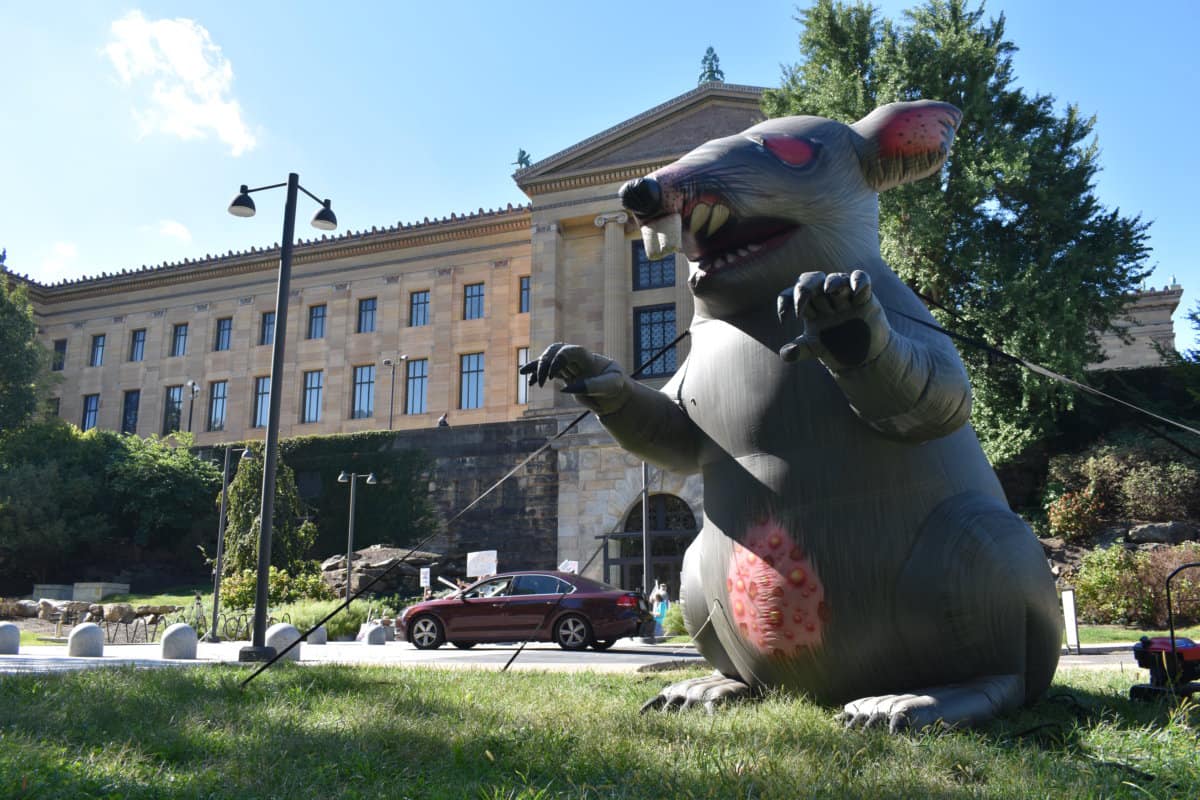 “Scabby the Rat” outside the Philadelphia Museum of Art on Monday, Sept. 26, as workers picketed. Photo by Jack Tomczuk via the Scabby the Rat Facebook page.