The poppy is over. Remembrance Day is not.

Every year the poppy is at the centre of a cyclical, empty, culture war debate. Last year, it was Don Cherry. This year, it’s Whole Foods.

The upscale grocery chain banning poppies for not conforming to dress code was met with a near immediate backlash and withdrawal. Whole Foods’ owner Amazon is an incredibly powerful force that busts unions, abuses workers and racks up obscene wealth. Nevertheless, they continue to be courted by municipalities all over the country to build warehouses and open new, gentrifying grocery stores, without much, if any, government backlash. 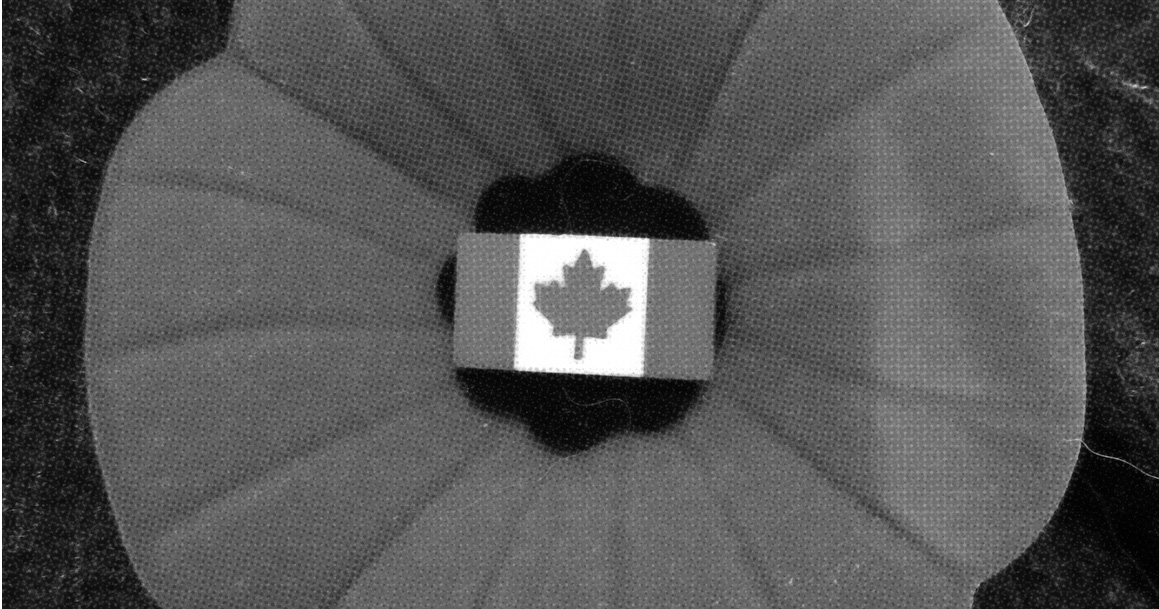 The poppy is now mostly just a cultural lightning rod that obscures deeper questions about war, peace and remembrance in favor of troop worship. It’s not just political suicide to question the poppy--fighting back against a largely fictional ‘war on poppies’ has become a way for the right to reap the rewards of virtue signaling patriotism and score easy points among their constituents. The poppy’s sacred status makes frank conversations about the historical and current role of our military impossible. But this is a role that must be questioned.

I won’t denigrate people for choosing to wear the poppy, or declare it a weapon of white supremacy. If you want to wear a poppy, if you’re proud of what it represents, that is your prerogative, and no one can take that away from you. No one even really wants to take it away from you, despite what the pundits and politicians tell us every autumn.

But what the poppy represents, what the idea of “Remembrance” entails, can’t just be the perceived upsides of Canada’s involvement in war. Canada hasn’t been the good guy, and the wars Canada fought in, both domestic and foreign, have often been senseless. Remembrance means remembering all of it, not just the glories, and having a critical relationship with it.

World War 1 was equivalent to a game of Risk played with millions of people sent to die for resources and territory. It was a crime that our nation’s military and political elite never faced any consequences for. The pointlessness of WW1 is not a particularly disputed fact, yet the poppy plays a particular role in erasing that truth in favor of empty, uncritical troop worship.

My great-great-grandfather was a World War 1 veteran, fighting the Ottoman Empire in the Indian Expeditionary Force. I come from a Muslim family that was in India pre-partition, and my father described his great grandfather’s involvement as “fighting his Muslim brothers in the Middle East for no good reason.”

Growing up in school, I never heard about Indian involvement in the British Army during the First World War. What we were presented with was a cavalcade of faces of young white men and histories of victories at Vimy and Ypres and Passchendaele. “This was the moment Canada came into its own” as a country is the oft-cited refrain. The heroics of these battles took center stage over any discussion of why they ever happened.

When I was 12, my brother, a history teacher, gifted me a copy of the novel Generals Die in Bed, written by WW1 vet Charles Yale Harrison about his experiences on the front. The book provides a rundown of atrocities committed by Canadian soldiers in France, and the Canadian Armed Forces have gone to great lengths to discredit it. Canadian atrocities in World War 1 are well documented regardless, and rarely spoken of.

This wasn’t unique to Canada, although Irish historian and veteran Robert Graves described Canadian soldiers as having “the worst reputation for acts of violence against prisoners.”

Only losers have to reckon with the atrocities they committed, and the winners tend to rewrite why they went to war in the first place. The invocation of the poppy as a measure of patriotism persists in removing barriers to Canadian participation in war crimes to this day.

Many liberal writers speak glowingly of Canada’s role as a safe haven for draft dodgers during Vietnam, but Canadian acts of resistance against conscription and military servitude have been all but erased from history books, save for a few nerds who are into that sort of thing.

Over 1300 Canadians fought Franco’s fascists in Spain under the banner of the Mackenzie-Papineau Battalion. But Canada as a nation did not participate, and during the war passed an act to prevent Canadian enlistment in foreign conflict.

Neither the Mac-Paps or heroic war resisters are commemorated on Remembrance Day.

In Oka, Quebec, Canadian forces were called in against Indigenous land defenders, used as a weapon of the state to remove people from their homes and land in order to ensure a golf course could be built.

The injustice of deploying our own military against the Mohawk people in Oka is not recalled on Remembrance Day.

Sexual assault in the Canadian Military is an epidemic with no end in sight. Rape is a common, horrific weapon of war and Canada is no outlier. As recorded during the Korean War in Cheers and Tears, by Hugh Avi Gordon: “A group of inebriated [Canadian] soldiers entered a farmhouse near Chung Woon Myung, raped Korean women and fought with South Korean soldiers trying to stop the crime. Three soldiers were tried and convicted of manslaughter or attempted rape, but all were released within a year.” A survey of half the cases of Canadian WW2 court martial in Paul Jackson’s One of the Boys found 36 rape trials. The book also describes in extraordinary detail the not-uncommon rape of servicemen by their superiors, as well.

So, too, is this left out of our “Remembrance.”

The poppy holds a particular significance in context of the illegal war in Afghanistan, where opium cultivated from poppies has increased to enormous levels and sent across the world, becoming a subsistence crop due to the devastation wrought in part by Canadian forces. This has led to international and inter-tribal conflict dubbed the Opium Wars. The blood red flowers invoked over a hundred years ago in Flanders Fields as a way to remember the dead are a daily reality of brutal life in rural Afghanistan, and it’s partly Canada’s fault.

The list goes on. None of these things are ever addressed in the context of Remembrance. Little plastic flowers have become a distraction from the fact that Canadians kill and have been killed for absolutely nothing, and in cases of settler violence, been an arm of the state in perpetuating the ongoing genocide of Indigenous people.

The tradition we have built up around the poppy doesn’t center the soldiers, the lives cut short, or the harm done by or against Canadians at war. Instead it creates unquestioned justification for ongoing interventions across the world. The great irony of Remembrance Day is that it’s not about remembering: it’s about forgetting. And every mistake we forget is one our politicians will make again.

In Canada, the pressure to wear a poppy is enormous, if not mandated. The federal government’s rapid condemnation of Whole Foods’ decision bears that out. I’m certain few soldiers who died during any war would want to be remembered over their descendants and countrymen toiling in brutal working conditions that their nation perpetually overlooks.

Did you know that the poppy itself is produced with prison labour? Its disposability is an environmental disaster and next year we’re sure to have ginned up poppy discourse on the Trudeau government’s ban on single use plastic; patriotism or planet? Which one is more important, Mr. Prime Minister? The Conservative Party of Canada would drum up a ton of support, I’m sure. The poppy is not just a convenient distraction, it’s an active part of the supply chain and propaganda campaign it’s used to uphold.

I stopped wearing the poppy in 2008, the same year I read Howard Zinn’s A People’s History of the United States and learned about Canada’s involvement in the now completely forgotten Afghanistan detainee scandal. A friend and I would go around the neighborhood stealing the once omnipresent “Support our Troops” magnets off of cars, inspired by a family friend who now, ironically, holds rank in the federal NDP. The poppy and the magnets instilled a gut reaction in me that was entirely hostile – a one sided, ahistorical idea of patriotism reflected in the same things my father told me. For him, it was Ottomans and Indians, both Muslim, killing each other for empire. For me, it was Canadians killing Muslims, of which I am both, for a useless, reactionary war of imperial dominion.

But over time, my attitude softened. The poppy still means a lot to many people. It’s a canvas reflective of specific personal and political values. It’s a way to remember their dead, and a way to not square with the fact that their dead died for nothing, or died fighting for the wrong thing. There’s no shame in that, nothing to denigrate.

Yet as a symbol it means nothing. Its absence on a lapel draws the wrong kind of attention. For two weeks every year, it dominates the media and takes the place of holding our government accountable for ongoing and historic harm. It is an empty symbol that distracts from the ways our country has murdered its own people and people all over the world, a distraction from the ways it sends its young to die and justifies it, and a lightning rod by which Canadians deem others to be “Canadian” enough. The poppy is a distraction from the many ways Canada is failing its citizens both on and off fields of war.

It has become the center of manufactured controversy that helps maintain a reactionary discourse perpetuated by right wingers like Erin O’Toole. It keeps the Canadian status quo firmly planted in the right wing and it drums up support for patriotism that can run interference for violent, aggressive, pro-war policy.

Keep wearing the poppy if it means something for you, but the time has come to end the annual poppy discourse. To engage with it is to engage with power that wants you to turn away from the harm it’s committing. There are better things to grapple in these months, that start with the nature of remembrance and extend to difficult questions around nationalism and hero worship. In the midst of an ongoing pandemic that casts frontline workers as heroes, as soldiers fighting a war without the proper weapons or manpower, the poppy seems like the last thing we should be discussing.

Those are more important conversations, and little plastic flowers won’t have them.

Abdul Malik is a writer and filmmaker who works in and around Edmonton's labour movement. You can follow him on Twitter @socialistraptor and find his personal essays at abdulymalik.com. Abdul is launching @offcourtpod January 3, 2021 on the Harbinger Media Network.