Statues of colonizers are coming down across Canada, it’s time to take down Edmonton’s Churchill statue

Reeling from the discoveries of thousands of unmarked child graves—each a victim of an attempt by our government to eradicate Indigenous cultures—people celebrated Canada Day differently this year. Monuments glorifying colonizers were toppled across the country, and at least one was decapitated. Statues of both Queen Victoria and Queen Elizabeth were brought down in Winnipeg. A statue of Captain Cook was thrown into the sea in Victoria. Frank Oliver’s plaque here in downtown Edmonton received an artistic reimagining with a splash of blood-red paint.

There’s a statue of Winston Churchill in Edmonton, holding court over our public square, which also received a new paint job recently. A clear indicator that any commemoration to Churchill should be removed from public view entirely.

Winston Churchill was a colonizer’s colonizer, an imperialist’s imperialist. You won’t find many historical figures more directly responsible for colonialism than him. He was a key architect in the misery and oppression of Indians, Africans and Indigenous people across the British Empire—and so across nearly the entire globe. His atrocities reverberate to the present day. 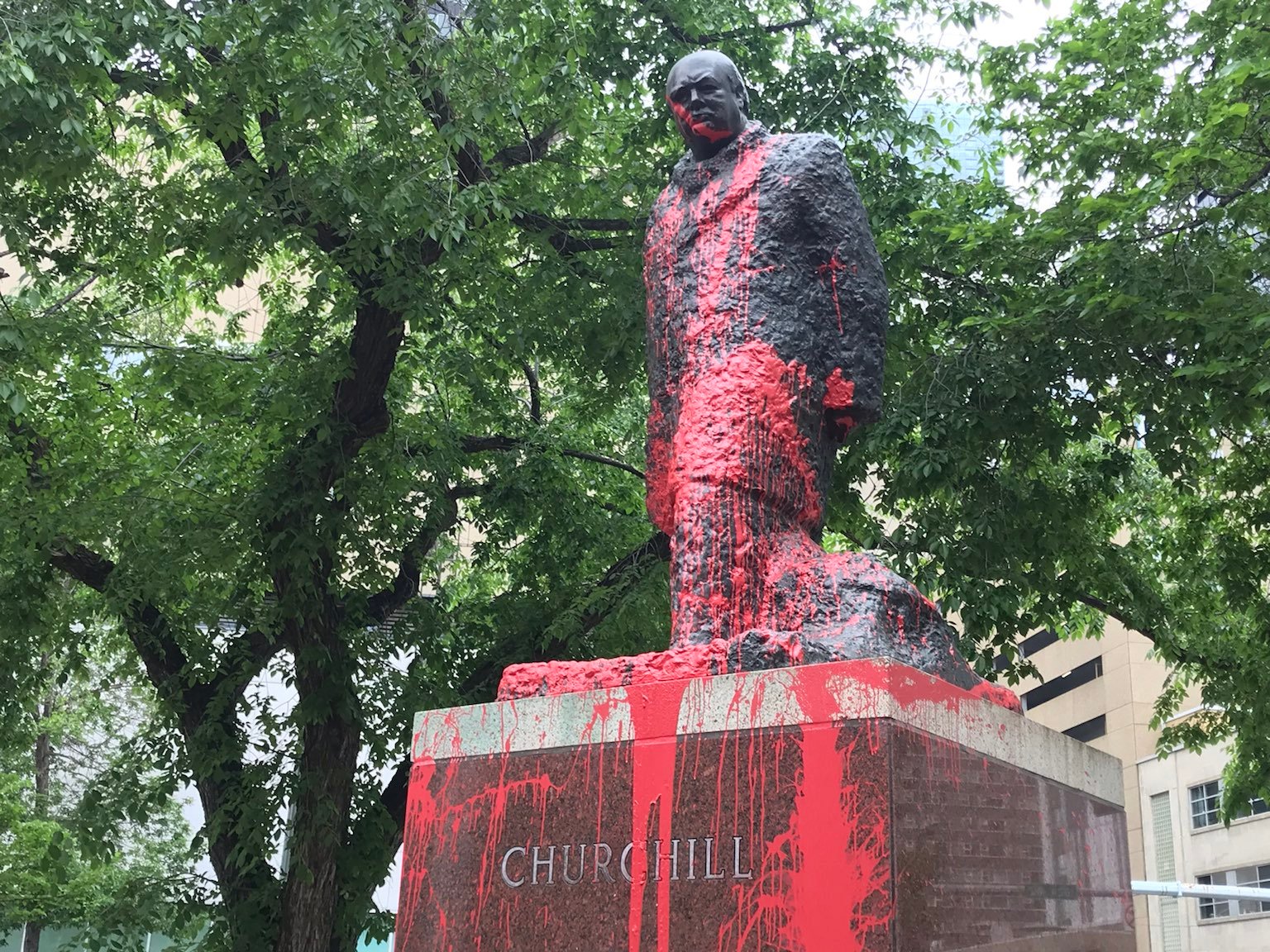 When the British were forced to leave India, they made sure to leave behind a legacy of conflict and violence for generations to come. Britain's scorched-earth policies were intentional, malicious and the petty attempts by a dying empire to assert dominance over former colonies that were struggling for freedom and sovereignty. From the deliberately engineered Bengal famine, which killed millions, to concentration camps, torture and extrajudicial killings in Kenya, to the bloody crackdown against the Malayan insurgency, Churchill’s dedication to white supremacy was so brutal that the list of crimes has its own Wikipedia page.

Edmonton is already making at least some small effort to re-examine its colonial history. Landmark decisions to change the name of its CFL team from the highly offensive Edmonton Eskimos to the Edmonton Elks, the renaming of a neighbourhood that had been dedicated to the racist Frank Oliver, and the removing of commemorations to a man who helped design the Catholic Church’s Indian Residential School project from the Grandin LRT station all demonstrate that there is some appetite for change.

But even in the present context of the recently unearthed mass graves at residential schools and the massacre of a Muslim family in London, Ontario, direct action addressing tributes to Winston Churchill are simply a step too far for many politicians who otherwise claim to support reconciliation and decolonization.

Defenders of the white-washed and sanitized version of colonial history, and the status quo, typically employ three specific kinds of arguments:

“I’m sure we can find a better way of having this discussion than law-breaking and vandalism,”

“Why are we erasing history? These men lived in a different era in which their views were typical of the day, and their accomplishments far exceed some questionable decision making or off-colour remarks,” and,

“These statues/memorials are art, we can’t allow them to be defaced.”

We recently discussed these arguments on the Progress Report podcast but let’s take it a bit further here.

We must have law and order

We saw many iterations of the law and order argument during the events that unfolded after the public murder of George Floyd, and after every rally for racial justice before and since. Although no sane person calls for violence in the wake of such tragedies, we need to discuss how peaceful demonstration crosses from homemade signs and marches to the destruction of public property.

At what point are we willing to put aside the law and order argument and have a deeper, more meaningful conversation? A conversation in which the oppressed and their allies can finally be heard, their frustration and concerns shared and addressed.

Martin Luther King Jr. once famously called riots the “language of the unheard.”

Let’s not forget that some of the most abhorrent acts in history were sanctioned by the state. From slavery to residential schools and every genocide from time immemorial, unspeakable acts have been, and continue to be, perfectly legal. Law and order is far from being synonymous with what is moral and ethical.

With every statue that is splashed with paint or removed from its pedestal, we elevate the conversation and allow for a more meaningful and hopefully, more accurate accounting of history and the need for reparations and reconciliation.

The argument here is that statues and memorials commemorate history, and thus must not be removed or altered. This argument is a favourite of Alberta’s current premier. It is preposterous.

During a panel held by Churchill College in February of this year entitled ‘The Racial Consequences of Mr. Churchill’ – “Professor Kehinde Andrews stated: “Memorials are not historical artefacts […] the conversation that we are getting rid of history is ridiculous. The point of statues isn’t historical record, but is to celebrate a particular thing.”

We don’t learn history through statues, we learn it from social studies classes and reputable historians who cite their sources.

Frequently deployed alongside the historical erasure argument is that while Churchill might have held controversial views and said racist things, that this was acceptable in his era. What this argument is supposing is that there was no one objecting to colonization, famine, genocide, oppression and slavery during Churchill’s time. From this we must assume then that being “woke” is a fairly modern concept.

Shortly after the Black Lives Matter protests, Churchill College released a statement saying they “welcome[d] an honest and critical engagement with history in all its fullness.”

The statement added: “We accept this will involve some difficult discussions around important historical figures which we will actively seek to facilitate. Churchill, as a successful leader in time of war, must not be mythologised as a man without significant flaws; on race he was backward even in his day.”

For the sake of argument, let’s suppose that this particular statue is, in fact, art (it’s a replica). Does the preservation of art supersede the rights of those traumatized by it? Edmontonians have already decided to cover up an offensive mural at the LRT station formerly known as Grandin.

Kingston, Ontario removed the statue of another controversial figure, John A. Macdonald, after Indigenous peoples organized a sit-in rally. We now know where Kingston city council stands on the question of art versus human dignity and the proliferation and continuation of generational trauma. Shortly thereafter, the pedestal was covered with white supremacist messaging so it seems all sides have weighed in on the former Prime Minister’s role in constructing Canada’s residential school system.

A compromise would be to move these monuments of colonizers, who at best are misrepresented and at worst contributed to genocide, to museums, art galleries or private collections. Better yet, let’s send these bronze lawn ornaments to the smelter to be repurposed into memorials for thousands of recovered Indigenous children. Something worth remembering.

Najib Jutt is a political advisor and brand strategist who often works with marginalized and equity seeking groups as they strive to represent the needs of their communities in both political and corporate environments. He is a regular commentator on political affairs, often speaking on social justice, reformation, and accountability in politics and business.
Do you like this post?
Tweet