Last week the Canadian Anti-Hate Network (CAHN) published an incredible scoop: that a group of Hitler-quoting, Stormfront-posting, Nazi Germany enthusiasts operating under the banner of the Alberta Separatist Youth League (ASYL), had embedded themselves into positions of power in the ‘Wexit’ Alberta independence movement.

Unfortunately Canada’s mainstream media seems much more interested in covering a Wexit Facebook page getting a lot of likes than to question the Wexit leaders who are looking to turn western separatism into a respectable political movement.

Rick Northey, president of the Wildrose Independence Party of Alberta (formed by a merger of the Freedom Conservative Party and Wexit Alberta), knew Sam Bell, one of the of the leaders of the Alberta Separatist Youth League, from when he was nominated to the interim joint board of governors for the Wildrose Independence Party of Alberta by Peter Downing.

But despite his involvement in the formation of Northey’s party, Northey distanced himself from Bell, pointing out that Bell did not purchase a party membership after the merger.

“I don’t have to kick him out because he never actually had a membership,” said Northey. “As a libertarian party we support free speech and freedom of expression but you have to draw the line at hate.”

Jay Hill was a conservative MP of various persuasions for 17 years and House leader under former prime minister Stephen Harper. He is now the leader of the Maverick Party, formerly the Wexit Canada Party. Hill was not familiar with the group or any of the young men identified in the story.

“As much as possible we screen people who join. Last I heard it’s a free country. People can join any political party they like,” said Hill. “It’s up to parties to disavow and expel. Certainly I would in this case.”

Hill said they vet all board members and candidates. “All parties have issues with candidates who slip through the cracks and embarrass the parties.”

Peter Downing, self-described co-founder of the Wexit movement, was dismissive of the CAHN report when we interviewed him. Downing knows Sam Bell and Eli Weisberg (another ASYL organizer mentioned in the CAHN report) but denied any knowledge of the ASYL’s association with fascism. “If Sam [Bell] or Eli [Weisberg] were quoting Hitler, ask them, I have no idea.”

Downing was dismissive of the CAHN report, claiming (several times) in our interview that the Canadian Anti-Hate Network had mocked him online for having an Asian wife. Downing showed us a screenshot of this harassment. It was from an anonymous Twitter account calling itself Red Deer Antifa that is not associated with the Canadian Anti-Hate Network. We pointed this out to Downing, who replied that “they’re the same commie shit show to me.”

We asked Downing if he condemned Nazism in the Wexit movement, but he declined. “As soon as you guys get rid of your bad apples, your communists and your perverts,” said Downing, “then I will be more than happy to denounce neo-Nazis – if they exist in the Wexit movement.”

When Downing’s quotes were read to him Hill said, “now you know why even before I joined Wexit Canada I made sure Peter Downing had left.” 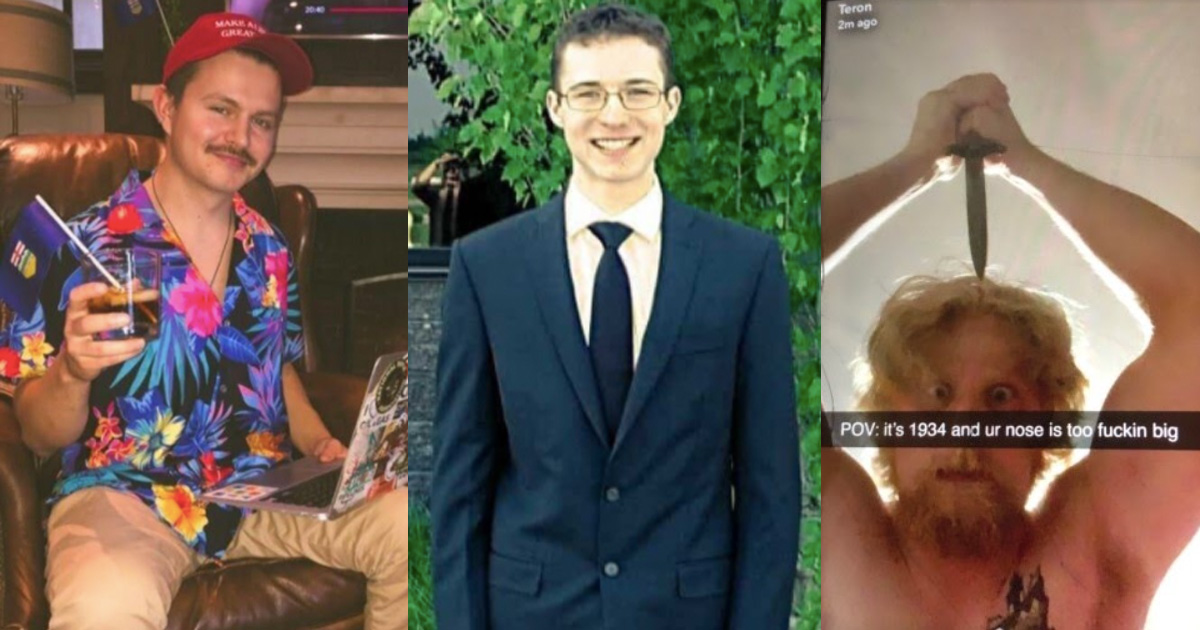 Sam Bell, Eli Weisberg and Teron Garbutt are all members of the Alberta Separatist Youth League as detailed in the Canadian Anti-Hate Network report.

Jewish and Muslim groups were also concerned about the report on the Alberta Separatist Youth League.

“We are deeply concerned by the growing manifestation of racism and intolerance within the Wexit movement in Alberta, and in particular that a group of young men who allegedly adhere to neo-Nazi ideology seem to have found a home within their ranks. These types of beliefs have no place in our society, and there is no reason to associate them with the Alberta independence movement,” said Debby Shoctor CEO and Steve Shafir, president, of the Jewish Federation of Edmonton.

“While further investigation is required, Alberta has no place for neo-Nazism or white supremacist groups. Every Albertan – including our leaders – must do their part to root out this scourge in our midst,” said Mustafa Farooq, the CEO of the National Council of Canadian Muslims.

"We unequivocally condemn any kind of behavior that promotes neo-Nazism by any individual or group. We work hard every day to combat the spread of this vile propaganda. Ideologies of hatred have no place in Canadian society, and we take any promulgation of them very seriously,” said B’nai Brith’s manager of public affairs in Alberta, Abe Silverman.

We did attempt to reach out to the Alberta Separatist Youth League and its members for comment but did not receive a meaningful response. The only reply we received was from the Facebook account purporting to represent the ASYL, who sent us an image of the coat of arms of Ukraine and one short message: “eat shit, Bolshevik."

You read the entire story, so please help us pay for the next piece of original, independent journalism: theprogressreport.ca/patrons