Jason Kenney’s interregnum continues to get weirder: over the weekend Kenney was doing online victory laps about one of the world’s largest crypto companies coming to Calgary. 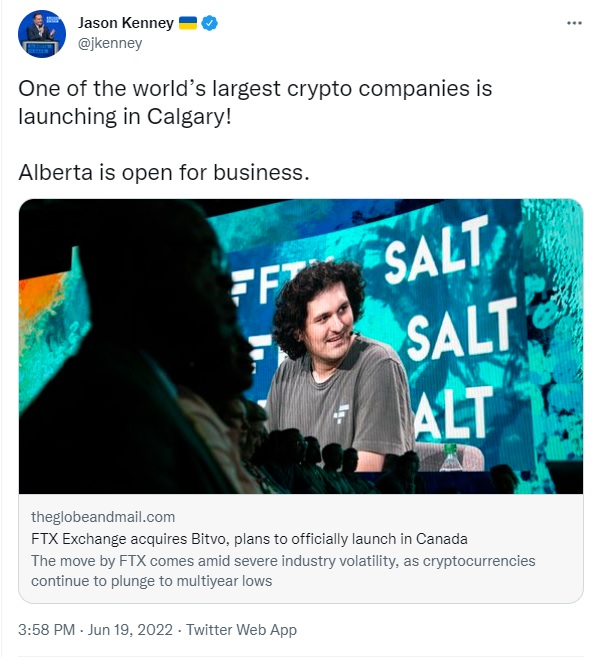 One problem, crypto markets are melting down right now. Crypto mining is catastrophic for the climate. The crypto scene is lousy with scammers and thieves. And crypto itself is a scam, always has been.

And FTX Exchange, the crypto company that Kenney is so excited about that is coming here? It's a Bahamas based crypto exchange/crypto trading firm whose billionaire CEO just pumped $16 million into American super PACs in April. Its CEO even went on a Bloomberg podcast and described crypto as a ponzi scheme.

Lord knows Jason Kenney loves a good scam, the man plowed $1.3 billion of our money into a pipeline that needed a Donald Trump win in order to get built. But this isn’t the first time that Kenney and his cabinet ministers have pushed crypto.

From Kenney’s perspective, why not? Alberta has lots of relatively cheap fossil fuel energy—as long as you don’t have to bear the environmental costs of all that carbon—and a weird, deregulated energy-only electricity market that allows for all sorts of funny business with a government and regulator that will do anything to bring any kind of capital investment to Alberta, no matter what.

In April the government passed the Financial Innovation Act which created a “regulatory sandbox in Alberta to provide financial services and fintech companies a safe space to test innovative products and services.” Essentially crypto companies could come to Alberta and set up shop with a government promise of little to no regulation.

According to the Financial Innovation Act’s ad copy, everything is going according to plan, the regulatory sandbox signals that Alberta is willing to work with cryptocurrency companies. And now those companies now have a strong incentive to move here and run the machines for their ponzi schemes on sweet, ‘ethical’ Alberta oil and gas. .

Kenney isn’t the only crypto bug in the party, either. They love the stuff. And it’s a solid bet that if the UCP retain power in 2023, pretty soon every unprofitable gas well around is going to have a generator hooked up to turn that fuel into doge coins and apes. Hope you like hot weather.

- Jason Kenney has been to Washington, D.C. three times in the past six months, ostensibly to talk up Alberta energy. His latest trip comes even after he’s announced he’s resigned as premier. Must be nice to job hunt on our dime.

- It’s not usually the Alberta NDP who have awful candidate scandals but they’re in hot water today after posters found a nomination candidate for Edmonton-Decore, Sharif Haji, was taking it upon himself to post unprompted hateful comments at trans women in 2015. Haji posted a long and self-congratulating apology on Twitter on Monday. The party, which claims to have not caught this in vetting, has not disqualified him from the race, which will pit him against two-term incumbent MLA Chris Nielsen for the right to run as the NDP candidate in 2023.

- This didn’t make it into our story on the police commission meeting we filed last week where the Chief Dale McFee changed his story about the Justin Bone murders but Chief McFee had three plainclothes bodyguards with ear pieces keeping watch on him at city hall last week. Seems like overkill when you’re in a room full of armed police?

- Edmonton’s auditor said the city’s response to homelessness isn’t co-ordinated, accountable or evaluated and the city doesn’t truly know how much it spends on the file. The report found that the city spent roughly $24.8 million on affordable housing and homelessness in 2021. By comparison, the city spent $385 million on police in 2021. Perhaps if those numbers were a little different the city might not now be in the absurd, but grimly necessary position of considering official tent encampments.

- Professor Alex Da Costa at the University of Alberta has done a deep dive on the Edmonton Catholic School School Resource Officer Program Review Report. While the ECSD and the police chief were quick to spin the report in the media as positive, have a look yourself; Da Costa finds the case for armed police in schools to be remarkably weak.