EPS and UCP win big in Edmonton’s police funding deliberations. But what was the police chief hiding?

Weeks of acrimonious debate around public disorder and the policing budget have come to a temporary conclusion in Edmonton, and the winners—to the tune of at least $22 million—are the UCP, the Edmonton Police Service, and the local business lobby.

At issue have been two sources of funding: a funding formula introduced during the Iveson years, and a pot of money derived from the city’s photo radar fines.

The formula guaranteed increases to the police budget every year. Some councilors and the mayor opposed the formula, arguing that council needed more control over what the police do with the city’s money.

The photo radar money, despite claims by Justice Minister Tyler Shandro to the contrary, had not been removed from the police budget. But it was imperiled: policy changes by the UCP imposed stern restrictions on where the city could place photo radar ‘traps,’ and the photo radar fund was running dry. The police lobby argued that if the city didn’t make this unstable revenue source a permanent part of the police budget, it would be tantamount to a $22 million cut.

For over a month, advocates of heavier policing waged a campaign that seemed to get sleazier and sleazier. The Edmonton Journal was graced by op-eds depicting downtown and the transit system as hell-holes and war zones. (Our Calgary readers are enduring a similar campaign in their own media this month.)

While the most outspoken foil to the police in council sessions was Michael Janz, the most aggressively-targeted councilor seems to have actually been Anne Stevenson. Stevenson’s position appears more conservative—leaning towards reform rather than defunding the police—but as a councilor who sits on the police commission, she’s closer to the levers of power.

A fellow commissioner, Jodi Calahoo-Stonehouse, tried to have Stevenson thrown off the commission, arguing that Stevenson has a conflict of interest because she employs Rob Houle, a survivor of police brutality and critic of the police. (Rob also has contributed to the Progress Report as a writer.) That didn’t work. So another councilor, Ashvin Singh, wrote a complaint to the Mayor, alleging (falsely, as far as we know) that my colleague Duncan Kinney is under police investigation and that Stevenson attempted to interfere in that investigation. Then the letter that Singh clearly wanted people to see mysteriously got leaked to the press. Greasy stuff. 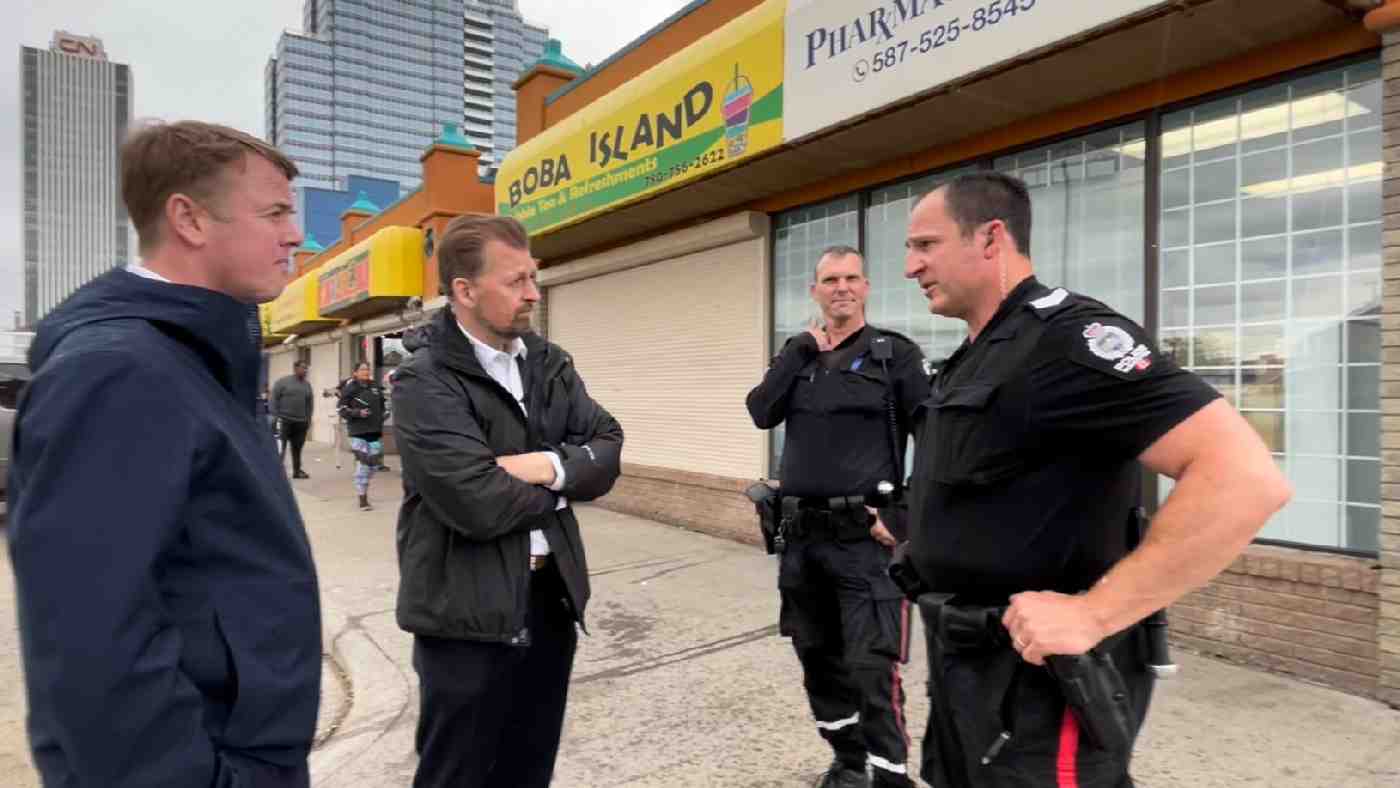 Several UCP cabinet ministers, including Tyler Shandro and Mike Ellis (pictured above), were quick to jump into Edmonton's policing debate in the most cynical way. Image from the Government of Alberta Flickr.

But by far the heaviest rhetorical cudgel deployed by the police lobby involved the murders of Ban Phuc Hoang and Hung Trang in Chinatown on May 18. Conservative politicians and the police lobby latched on to these horrific attacks immediately. UCP ministers Tyler Shandro, Jason Luan, Mike Ellis, and Josephine Pon publicly toured the area and made inflammatory comments. EPS Chief Dale McFee made a tearful appearance at a public rally. And on June 7, council caved to their pressure and met both of the police lobby’s demands. The Iveson-era funding formula lives on, and residents of the city of Edmonton will pay higher property taxes to make up for the $22 million of photo radar revenue that the UCP shorted the police.

Here’s the outrageous part. Since at least as early as May 18, the Edmonton Police Service knew details about the murders that they did not share with the public. Justin Bone, the accused, was supposed to be under supervision in Alberta Beach while he underwent treatment, and had strict bail conditions that prohibited him from coming to Edmonton unsupervised. But when Bone became unstable and difficult for his caretaker, and despite warnings that he was making violent threats and acting dangerously, the RCMP picked him up and dropped him off in the west end of Edmonton on May 15, three days before the murders.

It gets worse. The RCMP notified EPS a day later that Bone was in the city, and EPS actually tracked him down and met with him. But again, despite the previous warnings that he was in a dangerous state, and despite his presence in Edmonton breaching his bail conditions, they didn’t apprehend him.

All of this was known to the Edmonton Police Service by as early as the 18th. My colleague Duncan has put together a timeline of these events that makes it pretty clear that this event was cynically leveraged by Chief McFee and the police to win this budget fight.

The argument that more police funding is necessary to prevent another horrible incident like this falls pretty flat when you know that the police brought Bone to Edmonton and that police had already found and interacted with him before the attacks. But those details would have undercut the campaign for more cop money. So of course the Chief didn’t tell us.

Further deliberations on Edmonton’s police funding are not expected until September.

When Duncan reviewed our books in May the situation was very bad. We had already both cut our own wages in half and our budget for paying writers and researchers was getting very thin. So last week you probably received a plea from me in your inbox, or saw one from Duncan on social media: this month we need to find 100 more patrons for the Progress Report.

I was floored by the response. You folks are incredible. We don’t have any great fundraisers on the team at the moment, and I thought we would have to be grinding like mad (and annoying all of you!) just to get to the halfway mark. But so many supporters stood up to keep our project rolling that we’re already way past projections. Right now, we are at 92 of our 100 new patrons goal!

Not that we have to stop at 100, of course! More funding means we can support even more freelancers with more journalism work. If you’d like to become a patron of the Progress Report, our donations page is online at this link. (Existing patrons who want to bump up their subscription level: send me a quick email, I have to mess around in the database to do that for you.)

If I haven’t had the chance to send you a personalized thank-you, I hope you’ll accept this generic one. I am so, so grateful for your support, and we’ll keep doing our best to be worth it!