Progress Report #228: We're going to have to force Kenney to reopen schools safely

Students will get two reusable masks.

Schools will get hand sanitizer, face shields for staff and contactless thermometers.

That's the response the Alberta government hurriedly instituted this morning after an extremely negative response from parents, students and staff about the UCP's plan to reopen our schools. It's still far from satisfying.

Masks will not be mandatory in classrooms (!) but mandatory for grade 4-12 students in hallways, eating areas and other spaces. Edmonton Public School Board is instituting a mandatory mask policy in classrooms but that's over and above the government of Alberta's weak policy. No word from other school boards yet.

Class sizes are continuing to grow and thanks to a new K-12 education funding formula big city school boards (where the vast majority of students are) will have less funding per student this year than the 2018-2019 school year. For instance the Edmonton Public School Board has 6000 more students that they did in 2018-2019. but less funding--a 6 per cent cut per student.

There was no money given by the province to school boards to hire more teachers, more support staff or more janitorial staff. In fact this government seems fundamentally against the idea of hiring more teachers and support staff in order to make schools safer.

Folks are entirely correct to be concerned that Alberta's schools, especially big high schools, are just going to turn into a replay of the COVID-19 outbreaks at the Cargill and JBS meat packing plants.

If you're concerned about this issue there are few place to start connecting with other folks and start working together.

The Wall of Moms and Dads are organizing around making this reopening plan safe. They're on Facebook and Twitter and if you want to volunteer you can email them at momsanddads@shaw.ca.

Hold My Hand Alberta is a group organizing around keeping Albertans with disabilities and medical issues safe during the reopening.

Project Safe September has been very clear in its criticism of the re-opening plan and has organized a letter writing campaign.

The Alberta NDP's plan to reopen schools safely is an ambitious plan that has the right amount of ambition and scale needed for this huge, scary problem.

EDIT: We'd also recommend SOS Alberta a parent's group who have been building a stronger public education system for years now. And if you're a teacher we'd recommend connecting with the Rad Educators, a teacher's group focused on social justice.

But if I could give one piece of advice to parents, teachers, caregivers, education workers and students concerned about Kenney's reckless plan to reopen schools in the fall it's this–the single most effective way to force the government to reopen schools safely is with job action by teachers and support staff that that has popular support from parents and students.

If you're a teacher or a support staff worker the time to organize job action is now. Everyone has the right to refuse unsafe work but you're going to have to start organizing now to actually exercise that right in the fall. Now is the time to be talking to your ATA local. Parents are ready to stand with you to protect you and to protect the kids.

It's time for for teachers, education workers, parents and students to start talking. And I'm here to talk as well.

And if you're looking for a test case the Chicago Teachers Union is providing an excellent example of how you don't have to just put up with what the government is doing to you and you students. 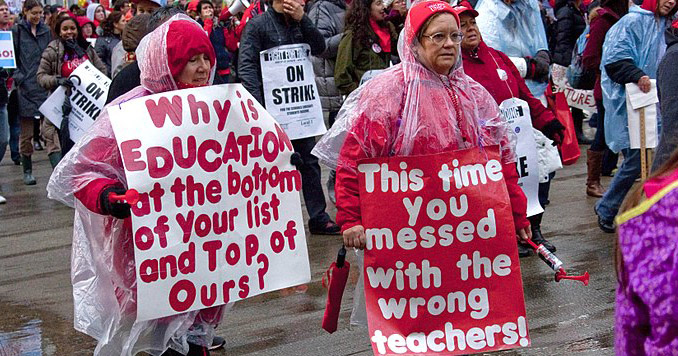 If you kicked and kneed someone so hard that it collapsed their lung you'd be facing assault charges at the very least. If you're an Edmonton Police officer you get a whole 30 hours of docked pay.

We've got some incredible, original independent journalism from us this week. Please read and share if you haven't already.

And two sundries that you need to know about but are not from us: