Hey hey, so this is Duncan here writing this message from Jim’s account. Jim is in the hospital and while he is responding well to treatment for his colitis I think he would definitely appreciate some get-well messages. You can reach him at [email protected] and given all the time he’s spending in a hospital bed Jim is also spending a lot of time on Twitter, so please send him a message on there as well.

And one thing he said to me after I dropped him off at the hospital, and I am not making this up, was that I needed to ask for donations. While our financial situation isn’t in emergency territory yet we’ve definitely lost donors over the past few months. And that’s understandable, so many people are out of work and times are tough. But if you have the ability to become a regular monthly donor, $5, $10, $15 a month, whatever you can afford means a lot.

Over the summer we will also be working on a big, official re-launch of the Progress Report. Look for a big announcement in September. But until then Jim and I still need your help. Support local, independent media and please become a donor.

Jason Kenney announced his big economic recovery plan to deal with the fallout from the pandemic and it sucks.

The linchpin of the plan is accelerating the plan to reduce corporate taxes. Instead of waiting a few years to gradually reduce the corporate tax rate to eight per cent Kenney will just slam it down to eight per cent on Wednesday. You had to expect this trickle-down disaster capitalism when Kenney appointed economist Jack Mintz to lead the Alberta Economic Recovery Council alongside such other luminaries as Stephen Harper, billionaire Nancy Southern and the CEO of AIMCo.

Kenney is making great hay about the infrastructure spending in the plan but there’s only an additional $3 billion of spending that hadn’t already been announced in prior budgets. Of that $3 billion, $1.5 billion of it is the government of Alberta’s $1.5 billion give-away to the Keystone XL pipeline. And even that $1.5 billion in capital spending is offset by huge cuts to education, post-secondary and health care.

We haven’t heard from professional economist Trevor Tombe yet on whether the UCP’s estimated 112,400 jobs created from their plan is a credible estimate or not.

The other linchpin of Kenney’s plan beyond tax cuts for Alberta’s largest and most profitable companies and a small increase in capital spending? He’s going to convince the financial giants of Bay Street to relocate to Calgary. I’m taking bets on whether Toronto-Dominion Bank or the Bank of Montreal moves to Calgary first. Why would they move their headquarters to Alberta? Cheap downtown office space and low taxes baby. In fact Kenney said it would be “irresponsible if they don’t consider moving to Alberta.”

Jason Kenney’s free-market petro-fundamentalism is going to make things a lot worse in Alberta as we pick up the pieces from the pandemic. Take care of each other and get organized folks. 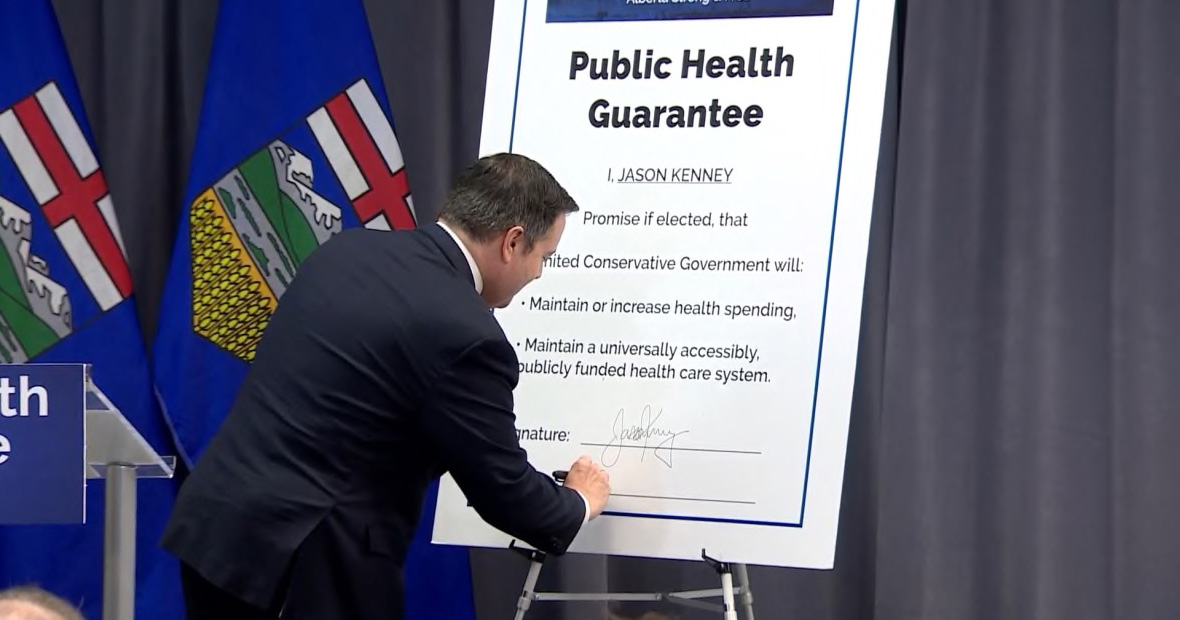 This is the online version of the Progress Report email newsletter. Don't depend on some social media or search engine algorithm to find this content in the future. Sign up to get the best left wing political newsletter in your inbox every Tuesday morning.