Paul Walker is the former pension fund manager for ATCO. While at ATCO, he oversaw $3.1 billion in pension plan assets with responsibilities that included asset allocation, investment manager selection/monitoring, asset/liability/risk management, oversight of operational policies and procedures including legal, audit, tax and custody relationships. Paul is now the Principal of Premia Mgmt, a family office advisor. This is an edited version of a letter sent to Finance Minister Travis Toews by Mr. Walker. This letter is written on behalf of friends, family and colleagues who have pensions managed by AIMCo but who are unable to speak out.

It is with anger and disappointment that I write to you today regarding the recent media reports rof AIMCo losing $4 billion of Albertan’s money. I have friends, family and neighbors who are just a few of the hundreds of thousands of hard-working people working in Alberta’s public sector. They are facing incredible challenges and working tremendously hard as both their and our province’s finances are being strained to the brink due to this crisis.

They contribute their funds to a pension plan which is managed by AIMCo, and they hope that their pension plan is safe. They expect that their pension plan is being managed with the highest fiduciary standards, the highest of accountability, and the highest standard of care. They hope that their funds are invested with a high performing investment manager that finds the best opportunities from around the world, and delivers results. In exchange for trust, they expect humility, excellence, integrity, transparency, and collaboration. If these words sound familiar, it is because they are direct from AIMCo’s website, under a section entitled “Who we are”.

When I read the news on this story there were numerous red flags. Firstly, clients of AIMCo have characterized AIMCo’s explanation of the loss as a “wrong-way bet against sharp swings in stock prices.” My understanding is that AIMCo is in the business of investing, not gambling.

Secondly, AIMCo appears to be an outlier amongst its peers in Canada for realizing such a loss. Perhaps they do not have the expertise that is needed to execute these types of investment strategies and lead the organization.

Thirdly, there is talk that AIMCo executives were not fully aware of the risks that they were taking. If they do not know what they are investing in, then they should not be investing in it. This is further evidenced by the news that AIMCo has apparently since shut down the investment program in question.

To put this loss in perspective, a $4 billion realized loss is equivalent to:

Simply put, the magnitude of this loss cannot be understated for Albertans.

Warren Buffett’s golden rule has served him well for more than 5 decades of investment excellence “Rule No. 1 is never lose money. Rule No. 2 is never forget rule No. 1”. It is understandable that stocks go up and down over time, with a general trend upward over the long-run. I simply cannot understand why AIMCo invested in strategies which faced the highest risk of all - a permanent loss of the capital of the clients which AIMCo is supposed to be a risk manager of - and even more shockingly a magnitude of losses which appears to have exceeded the amount that was invested in these strategies. Said differently, it sounds as though AIMCo bet ten dollars and lost fifty dollars.

I am requesting clear and concise answers to the following questions:

I welcome your prompt response to my inquiry, and am encouraging my peers to reach out to their representatives as well. I have yet to see any true humility or transparency with respect to this event. Dénés Nemeth, AIMCo Director of Corporate Communications, has said that AIMCo has not breached any of its internal or external rules or regulations related to the risks that it can take. This may be true, but in the eyes of the plan members, you have breached our trust and our faith in you. As far as we are concerned, you have bet the house, and lost the farm.

PS. The illustration below shows the potential negative returns that can be generated when trading certain volatility based derivative strategies. These strategies are generally considered inappropriate for pension funds due to the potential unlimited loss profile as illustrated. 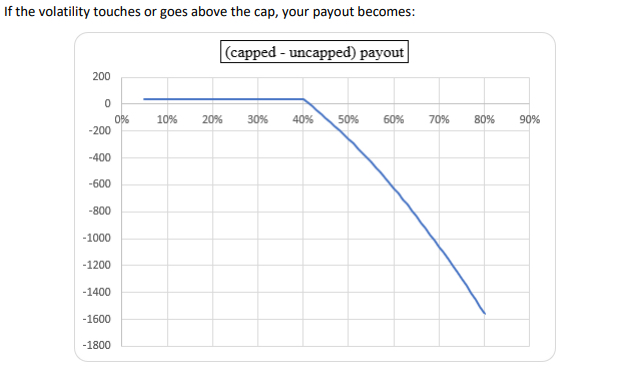