McKinsey, 🍞📈, and the UCP’s incoming evisceration of Alberta’s post-secondary system

In June, Alberta’s United Conservative Party government handed management consulting firm McKinsey & Company a $3.7 million contract to comprehensively review Alberta’s post-secondary system. To understand why our post-secondary system is well on its way to being viciously ripped to shreds by the high priests of neoliberal ideology we look to Pete Buttigieg.

In the spring of 2019, the fresh-faced, gay mayor of South Bend Indiana, Pete Buttigieg stepped into the race to become the Democratic nominee for president of the United States. He was running on a moderate platform which rebuffed the Medicare for All positions of democratic socialist Bernie Sanders and ostensible progressive Elizabeth Warren (who later backtracked). 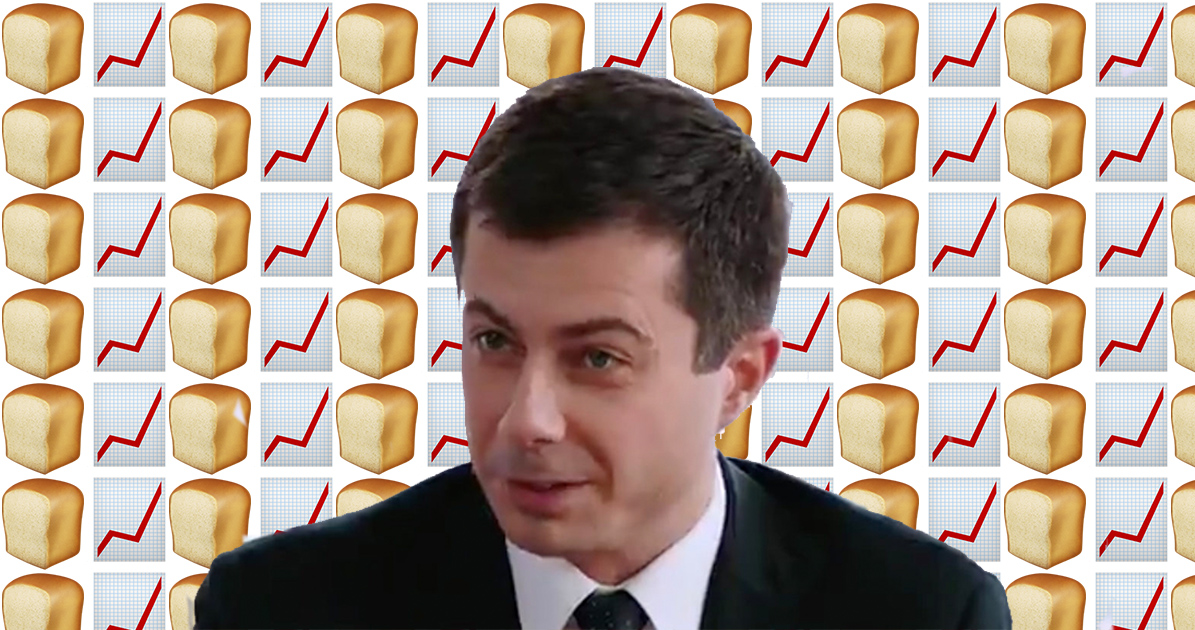 Buttigieg made frequent mention of his years as an intelligence officer with the naval reserve and service in Afghanistan. A gay, moderate veteran? There’s something in there for everyone! And the media ate it up. “Is America ready for its first gay president?” they asked in op-ed after op-ed after op-ed. “A policy wonk with sex appeal. Vogue’s Buttigieg photoshoot shows blandness can sizzle” declared Vogue Magazine.

Buttigieg surged in the polls, going head-to-head with the front runners in the race despite having little in the way of name recognition. Buttigieg, with almost no political experience other than being a small-town mayor, also led the crowded field in donations from the billionaire class.

“Many of what we call ‘conspiracies’ are the ruling class showing class solidarity.”

But a conspiracy theory emerged about the upstart mayor. Before his military service and after graduating from elite universities, Buttigieg worked at global management consultancy megafirm McKinsey & Company for three years from 2007 to 2010. He spoke glowingly of the time he worked there as one of their “whiz kids” and wrote about it in his memoir, Shortest Way Home.

One particular detail caught on like wildfire with Canadian left Twitter. One of his projects was working on “the effects of price cuts on various combinations of items across their hundreds of stores” with an unnamed Canadian grocery store chain. This timeline very neatly coincides with a massive price fixing scandal between Canadian grocery store chains on the price of bread. Between 2005 to 2015 the price of bread in Canada skyrocketed by 96 percent (for contrast, all other food increased by 45 percent over that period). The grocery cartel’s scheme was revealed when Loblaws got out ahead of the story and offered all Canadians a giftcard for $25.

And thus, the Bread Truther 🍞📈 movement was born, forever linking Buttigieg to the price fixing scheme, and dragging the shadowy dealings of McKinsey & Company into the public eye. The exchange on the matter between New York Times editor Binyamin Applebaum and a stuttering Buttigieg is a classic.

University of Chicago professor James O. McKinsey invented the field of management consulting and started his eponymous firm in 1926. The University of Chicago is famous for its arch-conservative school of economics, producing such luminaries as Milton Friedman, who went on to advise Ronald Reagan and Margaret Thatcher and gifted the world with the deregulated and staggeringly inequitable financialized economy we toil under today. The “Chicago Boys,” disciples of Friedman, worked with Chilean dictator Augusto Pinochet after a bloody coup to undo the nationalization of industries undertaken by the democratically-elected socialist Salvator Allende. McKinsey and Friedman were not contemporaries, but I like to imagine them hanging out and hashing out their evil plots in my mind palace.

So what exactly is management consulting? A management consultant will tell you they “solve problems” and “find efficiencies.” In reality, they’re mercenaries of downsizing, austerity and deep cuts, available for hire to do an executive’s dirty work and justify all manner of mass layoffs or reduction of service. Much like how our government will appoint an ostensible arm's-length party like the Blue Ribbon Panel on Alberta’s Finances or the Ernst & Young review of Alberta Health Services to bring about the deeply unpopular policies of cuts, deregulation, and privatization. “Look, our hands are tied here, we have to create for-profit surgical centres because this report for which we set the parameters says we do.”

Currently, McKinsey has offices in 130 cities in 65 countries across the world. Their client list is protected by robust non-disclosure agreements, though many particularly unsavoury details have come to light about their work. Here are just a few examples of the evil they’ve gotten up to around the world.

McKinsey consulted with OxyContin manufacturer Purdue Pharma  to “turbocharge” the sales of opioids, even when the company knew that people were becoming addicted and dying from the drug. In 2009, MacKinsey wrote a report on how to double annual OxyContin sales from $200 to $400 million by advising Purdue to stress messages that OxyContin’s benefits are to “reduce stress and make patients more optimistic and less isolated.” In that same year, Purdue and McKinsey put their heads together to figure out ways to counteract the emotional messages from mothers whose children had died from opioid overdose by creating an advertising campaign of counter-messaging. As the epidemic reached new heights, with 12.6 billion pills distributed in the United States in 2012 and public pressure intensified for pharmacies such as Walgreens to crack down on distribution, McKinsey was there for Purdue, advising them on how to lobby Walgreens to ensure their product continued to sell. The opioid crisis was particularly devastating to the deindustrialized communities in Appalachia–earning OxyContin the nickname “hillbilly heroin”–and blowing the statistics for death and diseases of despair in the region into the stratosphere,

McKinsey’s Orwellian “detention savings opportunities” for the concentration camps run by Immigration and Custom Enforcement (ICE) were too much for even ICE, the organization whose purpose is to terrorize migrant workers, deport people, and rip families apart. With a $20 million dollar relationship beginning under the Obama administration and ending only in 2018 amid massive public outcry, McKinsey’s management consulting solutions for the agency included speeding up the deportation process, cutting costs on food and medical care for detainees, spending less on maintenance for facilities, and transferring long-term detainees to cheaper and underserved rural county jails. One ICE official said that meetings with McKinsey consultants were “heated” and “[ICE] staff members questioned whether saving pennies on food and medical care for detainees justified the potential human cost.” McKinsey & Company – evil enough to make the modern Gestapo blush. Nonetheless, McKinsey soldered on despite the alleged opposition from within the agency, even ghostwriting their own government contracts justifying their own retention.

The list of McKinsey’s shady dealings is so vast that I can’t touch on all of them. From aiding the Saudi Arabian government to identify the dissidents responsible for negative coverage of their economic policies (possibly culminating in the alleged murder of Saudi journalist Jamal Khashoggi), to illegal entanglements with a corruption scandal involving the national power company Eskom in South Africa, to its senior executives caught up in insider trading in the Galleon Scandal, to propping up authoritarian regimes all over the world including Kremlin-linked businesses and Ukrainian oligarchs, the list goes on and on.

McKinsey also has a well-documented connection with the Central Intelligence Agency, the architects and accomplices of verified conspiracies we know of like COINTELPRO, MKUltra, and Operation Condor. In 2014, the CIA paid McKinsey over $10 million to assist with “restructuring” the agency. Though a relatively small portion of the CIA’s estimated $12 billion dollar annual budget, according to the New York Times, “current and former U.S. officials said they could not recall a previous case in which the CIA had hired an outside consulting firm at such expense.”

The United Conservative Party and McKinsey & Company are a match made in heaven. Both wholeheartedly embrace a market fundamentalist ideology of economic growth and efficiency at any human cost, whether it be giving imprisoned migrant children a few hundred calories less, or sacrificing some senior citizens who have outlived their usefulness to the coronavirus for the sake of the economy.

The government of Alberta sent out a request for proposal from consultants to  create a strategy for the post-secondary sector and McKinsey won the $3.7 million contract. Essentially, the goals of the project are to align the government’s post-secondary sector strategy with the goals set out in the Blue Ribbon Panel Report on Alberta’s Finances headed by queen of austerity (and new University of Alberta Board of Governors member) Janice MacKinnon. The report (with talking points given directly to MacKinnon from the government) “concluded that Alberta’s post-secondary system lacked common goals, spent more money per student than some other provinces, and extracted less value per dollar.”

The “free market”-driven solutions proposed in that document which the Alberta government is particularly interested in McKinsey developing their reports are:

Essentially, what is being asked of McKinsey is to cut the post-secondary sector into little pieces  and distribute them to the private sphere, offloading the costs away from the public and onto individual students in true Chicago Boys fashion.

Ricardo Acuña, president of the Association of Academic Staff at the University of Alberta, described McKinsey as “fucking evil” and speculated that the worst possible outcome for the post-secondary sector from this report is also the most likely. “They are focused on a very corporatist mandate, a managerial approach to post-secondary” said Acuña. “It looks like what the government wants out of them (and what they will deliver) is a list of campuses to close...as a way of reducing duplication. That’s their big thing”

Acuña is also concerned where the review will go when it comes to how universities are run, and academic staff will no longer have input on research and program design. “There’s this fear that they want to trash that collegial governance and give the Board [of Governors] control and power over all decisions. And that would just be horrific for the universities because all of the sudden, you’re no longer doing research and developing programs for the public good,” said Acuña. “All of the sudden, you’re meeting whatever interest dominates the Board, and with what [the government] has done to the Board, we know what those interests are. They’re largely corporate oil and gas interests.”

It’s already bad and with McKinsey on board it’s going to get worse. The UCP has cut tens of millions from the post-secondary budgets, laid thousands of post-secondary workers off and tuition is expected to rise by 21 per cent over the next three years.

I spoke with one of the primary people behind the popularity of the Bread Truther movement,  twitter user @chalicotherex and asked him how he felt about public money going to McKinsey & Co to gut Alberta’s post-secondary system and he responded simply: “Fucking terrible.” He added, "They shouldn't be allowed to do business in Canada until we've seen what their connection to the Loblaws bread price-fixing scandal is."

The Red String is an ongoing series about conspiracy, collusion, and collaboration by truth-seeker Laura Kruse, who has never met a tinfoil hat she didn’t try on for size. You can follow her on Twitter @_SaturnReturn or listen to her on the @KinoLefter podcast.