If you think this is a breakthrough, you’re probably a fast-food franchise owner. 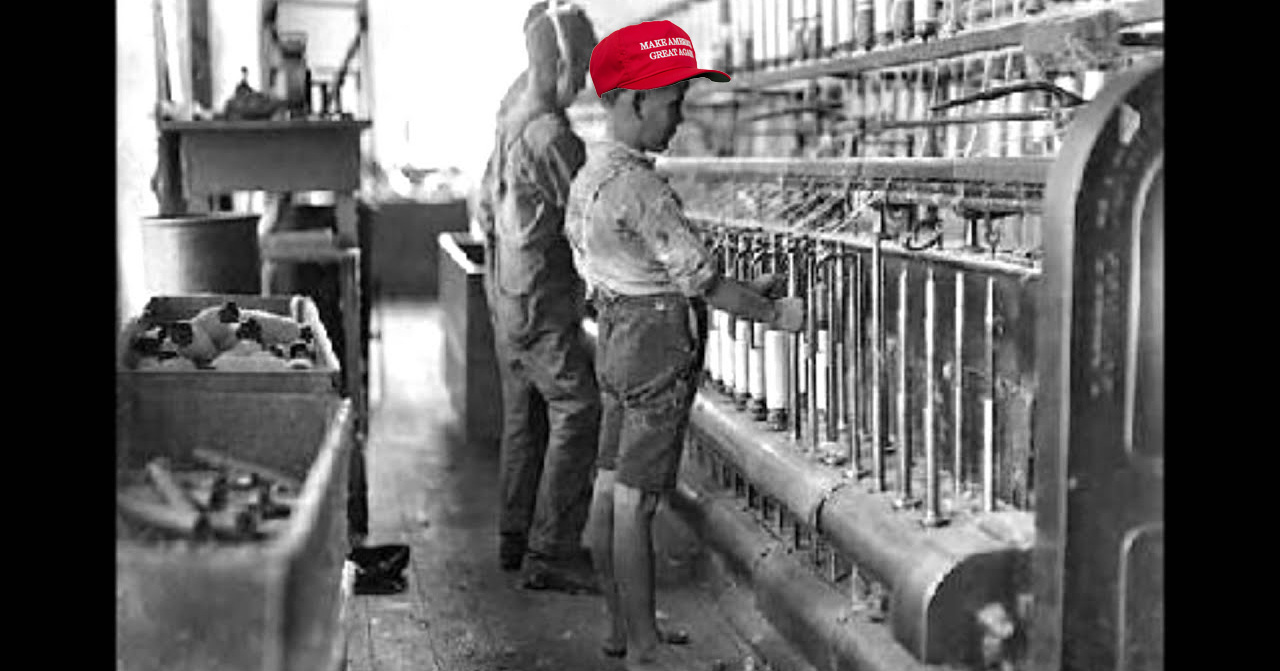 Yesterday, Premier Jason Kenney’s United Conservative Party introduced a bill called the Restoring Balance in Alberta’s Workplaces Act that is clearly intended to push labour relations in Alberta back toward the 19th Century.

High among Bill 32’s changes, which Labour Minister Jason Copping ludicrously tried to pass off as post-COVID-19 economic stimulus and red tape reduction, was a provision allowing 13 and 14 year olds to be put to work in jobs that even under past Progressive Conservative governments required a special permit.

“This economic crisis due to COVID-19 has been especially difficult for our youth, who are already struggling to find employment here in Alberta,” Mr. Copping piously read from his talking points during an “embargoed news conference” with mostly compliant mainstream reporters on the line yesterday morning.

Flanked with unintended irony by “Red Tape Reduction” Minister Grant Hunter and cabinet’s private-sector union liaison, MLA Searle Turton, the minister continued: “So as we work toward re–launching the economy, the proposed changes will help youth find work by expanding the types of jobs 13 and 14 year olds are allowed to do without first needing a permit.

“These are just some of the ways flexible rules around employment standards will help the business recovery and help Albertans return to work so they can take care of themselves and their families,” Mr. Copping’s talking point concluded. Great news, I guess, if you’re a 13-year-old who heads their own household.

Mr. Copping, fumbling his lines like a man who knew in his heart this was disingenuous claptrap, didn’t do nearly as well responding to questions.

For example, one reporter asked: Won’t this put children at risk?

And why so restrictive, one wonders. Don’t 11- and 12-year-olds need work too? Especially if they’re tall!

Won’t those new coal mines that will be creating Alberta’s jobs of the future need strong young workers too? I kid you not, I actually heard former PC MLA Robin Campbell, now president of the Coal Association of Canada, talking about “Alberta’s ethical coal” on the radio yesterday!

No need for rules, Mr. Copping continued, the government can trust employers to do the right thing. Plus, “we fully expect parents to be involved with their kids in terms of, you know, where are they working and what they can do. So, you know, we’ll be able to manage it that way, through inspections and through complaints. …”

This would be funny were it not setting the stage for tragedy. If you’re a parent and your 13-year-old gets a job next summer, you’d damn well better question her closely about what she’ll be doing, what kind of equipment she’ll be expected to operate, and what kind of safety training she gets.

Don’t expect her union to be able to speak up for her because this legislation is principally designed to ensure she doesn’t have one or, if by some miracle she does, it’s unable to do its job effectively.

In other words, Bill 32 has absolutely nothing to do with restoring balance in Alberta’s workplaces, which thanks to timid labour law reforms enacted by the overly cautious NDP Government in 2017 that nudged the most regressive labour laws in Canada into the middle of the 20th Century, the balance in Alberta’s workplaces remains heavily tilted in favour of employers.

Rather, it’s a wholesale Cotton-Belt-style effort to hamstring unions with red tape and unconstitutional limits on their right to advocate for their members and their members’ rights to associate and speak freely, while allowing employers to conduct themselves as they please.

Litigators will be pricing retirement properties on Salt Spring Island because this constitutionally challenged law is going to make lawyers rich.

On Bill 34’s requirement union members should get a vote on whether their dues can be spent on “political causes” — undefined, of course, so I guess we’ll just have to wait for Mr. Kenney’s cabinet to make something up — Mr. Copping claimed “we are standing up for individual workers’ rights … by allowing workers to choose if they want to support a political campaign with their union dues.”

Consulting his talking points, he waxed indignant that “some national unions have used provincial workers’ dues to campaign against Albertans, their jobs, and against Alberta’s core industries and interests.”

“We will not stand for unions, such as Unifor, campaigning against the interests of Albertans in our core sectors, using money of hard working people who they represent in those very sectors without their explicit approval,” he said. It will be interesting to see what Unifor has to say about this.

Bill 32 will also make it illegal for a picket line to even slow down someone trying to cross, a provision that is bound to create picket line violence — although that may in fact be the government’s goal.

It would allow cabinet to set union dues — a plan with some interesting legal implications of its own, also certain to be challenged in court.

It attempts to ban secondary picketing — surely a restriction on Charter protected rights. Nevertheless, Mr. Copping assured a reporter, it will still be legal for union members to demonstrate at the Legislature or City Hall — at least until they’re declared to be “critical infrastructure.”

Additionally, it would require democratically elected unions to give members an annual financial report, which I personally don’t think is a bad idea. But since most do so anyway, it’s hardly needed except to advance the UCP’s false narrative about unions and pile on more red tape.

Oddly for a government that claims to be standing up for workers’ rights, a provision hidden in the bill would let the government strip employees of their opportunity to change unions or decertify. Currently that can happen during the “open period” near the end date of a collective agreement. Bill 32 allows employers and unions to cut deals that ensure there will be no open period, giving anti-democratic unions even more power than they have now.

The Christian Labour Association of Canada was the only union to endorse Bill 32.

Plus, of course, Bill 32 heaps red tape on unions. Challenged about this by a reporter, Mr. Copping actually gave a halfway forthright answer: “We’re making some changes which are policy changes which will increase to some regard some red tape, so this is a policy choice.”

Exactly right. It’s a policy choice to make it hard for unions to do their jobs, to ensure working people don’t have effective representation, and to make sure no one speaks for people without union representation in society. Even if they’re children.

This article was originally published on AlbertaPolitics.ca. You can read the original article here. Please support the writer if you enjoyed the article or found it helpful.