Labour needs to join the defund the police movement. And it's not why you think

The worldwide groundswell against police brutality set off by Minneapolis police’s brutal murder of George Floyd has dramatically changed the politically possible. Organizing and direct action against police brutality have produced tremendous victories. Public perception of Black Lives Matter and anti-racist activism has swung incredibly positive. And a clear, coherent demand has emerged from the movement – defund the police and use the funding that frees up to invest in the community and stronger public services.

It’s a demand that makes a lot of sense. Consider the sheer scale of police budgets in Canada’s major cities, last year the Toronto police got $1.1 billion. In Edmonton and Calgary the total comes to more than $750 million. The Montreal police got $662 million. And without fail, every year, no matter the austerity that other city departments face, police budgets always go up.

Budgets are moral documents that show you the true priorities of any government. Right now the biggest line item for every big city budget in Canada is the police. The situation is perverse: austerity and cuts to social programs have the deepest impacts on Black and Indigenous communities and people who struggle with homelessness and poverty. Yet these very same people are the ones who are continually subjected to violence, brutality and indignity by police. It’s a spiral of systemic injustice that must be reversed.

The labour movement needs to join the defund the police movement and not just out of solidarity but to improve the financial well being of members and to grow union membership. Healthcare unions and municipal unions especially need to make common cause, ally with and otherwise support the groups who are organizing to defund the police and not just not out of virtuousness. Defunding the police aligns with the long term interests of municipal and healthcare unions and the labour movement as a whole.

Cops are not workers and if you’ve ever tried to stop scabs from getting into a workplace or otherwise inconvenience an employer during a strike or lockout you know what side the cops are on. There is a reason police are not a part of the Canadian labour movement. The violent tactics and militarized equipment that police use today to harass the unhoused, suppress protests and dismantle direct action projects will be used just as freely tomorrow to break strikes.

Re-allocating funding away from police and towards social services provides an opportunity to employ workers in dependable, reliable roles that genuinely promote the public good. Edmonton’s police chief Dale McFee has admitted that 30 per cent of what Edmonton cops do is social work. Yet we’ve seen over and over again the tragic results of sending heavily-armed officers, primed for confrontation, to deliver health care or support services – too often they deliver a beating, or worse, a hail of bullets. It’s time to start sending the right people for the job..

If we are going to replace a lot of what police do with up-skilled social workers, paramedics, nurses, mental health and addictions counsellors and crisis response workers then those need to be good, unionized jobs. 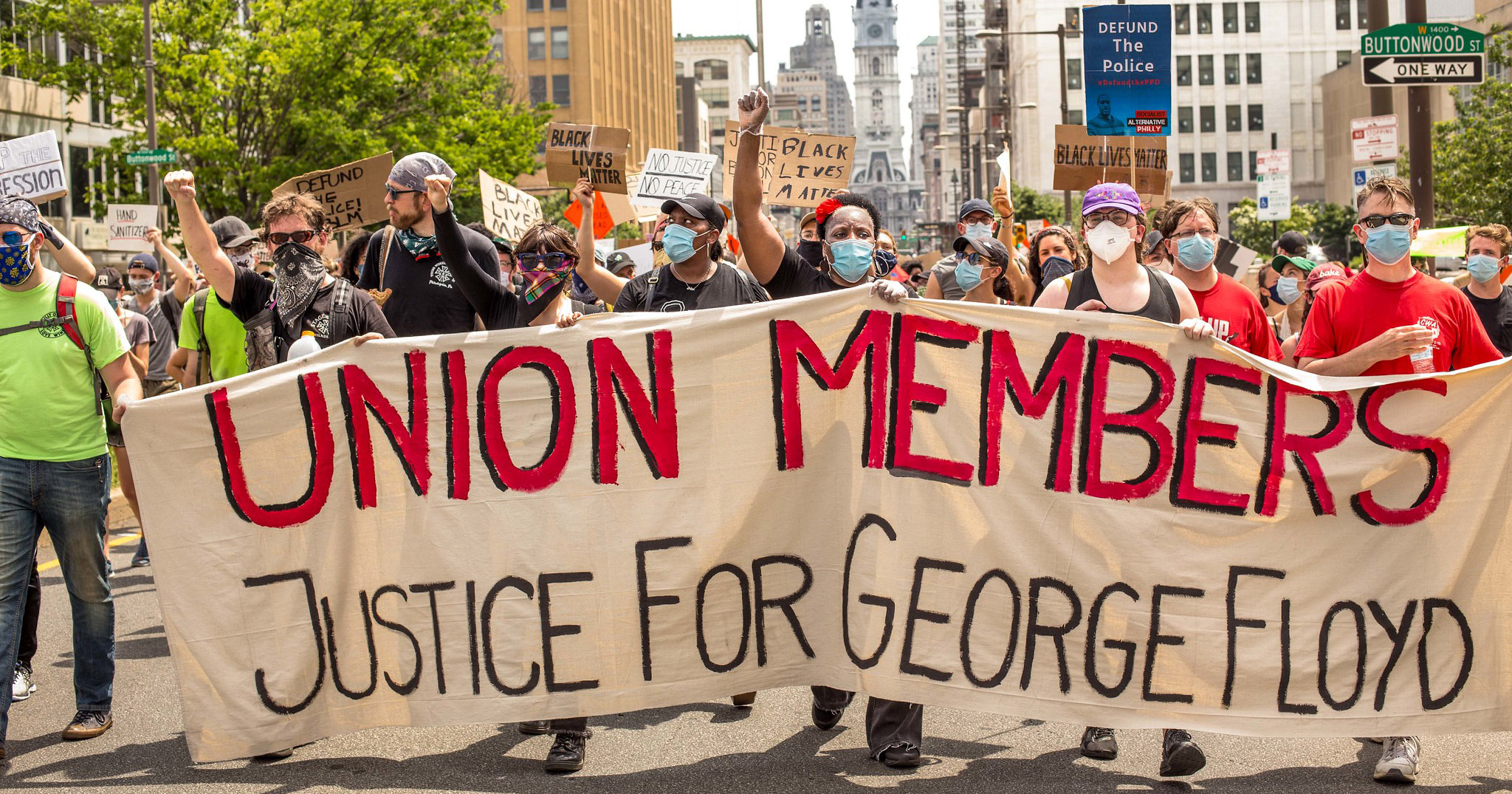 Re-orienting our institutions to provide support instead of policing is a long-term project and labour leaders and organizers need to start building relationships with the groups doing this work now. Additionally municipal unions need to get behind defunding the police because these groups are the only ones putting any downward pressure on police budgets.

Every year, like clockwork, the police budget goes up while the budget for transit or city worker salaries is frozen or cut. And when you look at the demands of a group like BLM Toronto it overlaps almost entirely with the work that members of municipal unions and healthcare unions already do. BLM Toronto wants to redirect half of the $1.1 billion the Toronto police get to “secure, long-term housing for street-involved and unhoused communities, food security programs, public transit, public health, public libraries, and community-led anti-violence programs.”

Right now if you call 911 and you need non-police help there is a patchwork of ad hoc programs with no clear vision or leadership around how we keep people safe without police – that has to change. In Edmonton, the city where I live, there is a 24-7 crisis diversion team you can contact that does good community-minded work in certain situations. But the workers are under-resourced, non-unionized and based on certain legislative and corporate culture realities still have to work very closely with armed police.

If you’re looking for a labour union that has already started building these relationships, Unifor, the largest private sector union in Canada, is ahead of the curve. They’ve called for redefining public safety in Canada and for comprehensive reforms to Canadian institutions that allow, support, or excuse systemic racism. Unifor has already moved beyond just making statements and is working with and supporting Black Lives Matter on their initiatives in most Canadian cities.

Defunding the police and creating new civilian run institutions with well-organized workers represented by strong unions who sincerely work to keep our communities safe might seem revolutionary but six months ago even talking about defunding the police marked you as a wild-eyed anarchist radical. The opportunity for real change rose unexpectedly, and may disappear without warning too. We have to seize it while it’s here – the time for organized labour to join the movement to defund the police is now.