Back in March 2020, Jennifer Rapuano-Kremenik saw a father with a young child holding a sign that read, “Single father, need help. Don’t want money, want a job.” That inspired her to get together with friends to start a grassroots organization called Harvest Hills Cares which has helped more than 3,200 families in need of food, shelter, and other support so far.

Placing me on hold multiple times to take calls for assistance in the short time we were on the phone, Rapuano-Kremenik told me about some of the more poignant situations she’s addressed over the past seven months. 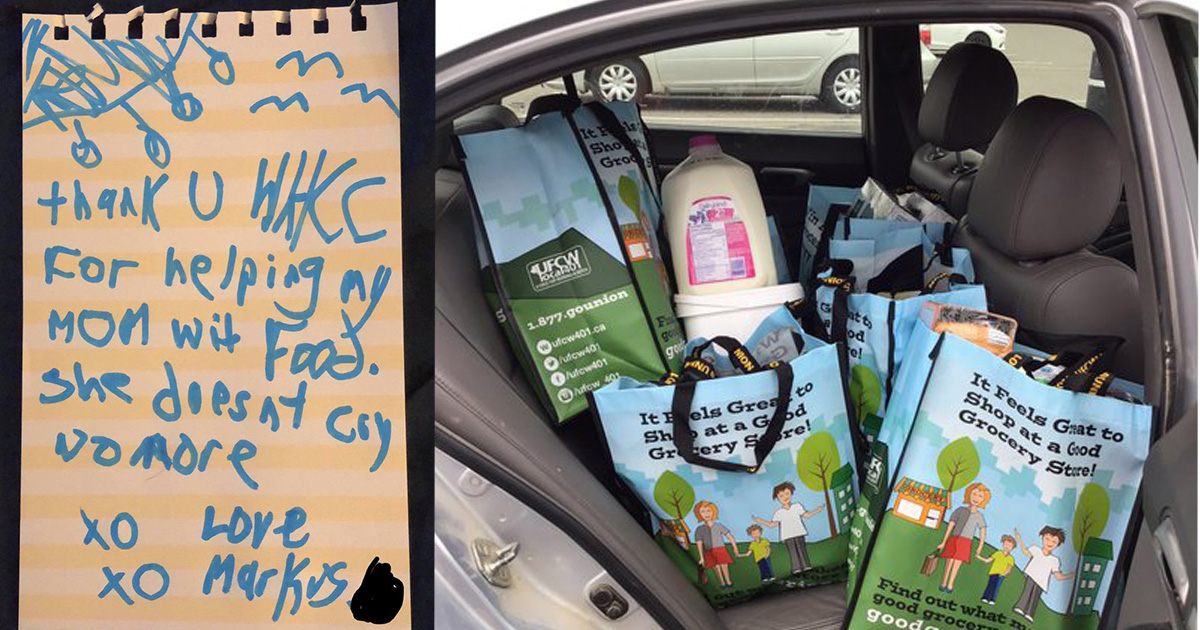 “A ways back, in the middle of the night, I got a call from a mom who was rationing her own food to ensure she was able to feed her kids,” says Rapuano-Kremenik. “She’d been laid off with one month’s savings. She didn’t get her final paycheque or her vacation pay, and her family was down to their last three days of food.”

Helping her meet her basic needs meant the mother could turn her attention to securing a new job, which she was eventually able to find.

Rapuano-Kremenik says stories like this are not uncommon. This is Jason Kenney’s Alberta.

During the 2019 election, you couldn’t get within a few yards of UCP leader Jason Kenney without hearing the words: jobs, economy, pipelines. They were his mantra, his motto, his holy trinity.

“Our Job Creation Tax Cut alone will help create at least 55,000 full-time private-sector jobs by bringing investment back to Alberta through a one-third reduction in the tax rate on employers. We will scrap the carbon tax with Bill 1 of a UCP government, which economists project will create at least 6,000 new jobs,” Kenney wrote in an op-ed.

But Kenney’s tax breaks for polluters, corporations, and the wealthy haven’t created the jobs he promised – and since then the UCP has put ten of thousands of people out of work through layoffs and cuts.

Alberta’s major energy players were only too happy to take a piece of Jason Kenney’s $4.7 billion corporate tax cut handout. But slumping oil prices and the economic uncertainties of COVID-19 have resulted in industry-wide layoffs rather than the wave of new jobs that Kenney confidently predicted.

Many companies have been cagey around releasing definitive numbers. But the list of oilpatch players who have fired workers is long and unforgiving.

Husky Energy got rid of 370 jobs in late 2019. Then over the summer of 2020 Cenovus, Ovintiv (formerly Encana), Enbridge, and Shell announced layoffs of as much as 25 percent of their respective workforces.

As the effects of the global pandemic have pressed into the fall, TC Energy laid people off but refused to say how many folks got a pink slip and Suncor released the grim news that it would be laying off 10-15 percent of its workforce over the next year and a half – nearly 2,000 workers.

Repealing the carbon tax clearly wasn’t the miracle cure for the patch that Kenney and company spent a year touring the province to sell.

Sadly, the premier’s myopic focus on oil and gas to the exclusion of all other industries means that our economic eggs remain infuriatingly piled up in one increasingly troubled basket. Recently the UCP announced another massive subsidy to the oil and gas industry, giving them a three-year holiday on paying property taxes on new wells and pipelines as well as eliminating its tax on well drilling equipment, lowering tax assessments for unprofitable wells and extending a generous subsidy on shallow gas wells.

As if the anemic state of Alberta’s flagship industry weren’t bad enough, the UCP has seemed unable to stop itself making a bad situation worse.

Last week, Health Minister Shandro announced he was firing 11,000 health care workers. Not that the services those workers provide aren’t needed. It’s just that the UCP would rather fire unionized workers so that they can outsource the work to private companies.

The decision is just the latest in a long onslaught that began shortly after the UCP assumed office.

From the introduction of its first budget on October 24, 2019, the UCP’s rigid ideological adherence to austerity to pay for their failed corporate tax cut has resulted in the hemorrhaging of Albertans’ jobs.

Union representatives at the University of Calgary indicated that job losses for support staff were undoubtedly related to the budget given the timing. Days later, news broke that the failure to provide funding for the popular Student Temporary Employment Program (STEP), revived under the Notley government, meant that jobs previously provided to post-secondary education students would no longer be available.

Days after that, provincial firefighters called the decision to eliminate funding for Alberta’s elite rappel firefighting program “baffling.” Minister of Agriculture, Devin Dreeshan, suggested that affected firefighters could go work in BC where a similar program still exists.

Kenney and the UCP spared virtually no segment of the workforce from job losses. Layoffs have hit a broad cross-section of Albertans, from nurses, support staff at universities, and teachers and educational assistants to laboratory workers, laundry service personnel, and retail food workers.

However, the most significant decision occurred in late March 2020, just as the global pandemic’s full effects began to take hold. In one of the largest single largest mass layoffs in Canadian history, Education Minister Adrianna LaGrange announced the firing of 25,000 educational workers.

At a time when provinces like Ontario were moving to protect workers impacted by COVID-19, Calgary Herald columnist Don Braid called the UCP’s ideological fanaticism “almost beyond belief.”

In March, CBC journalist Robson Fletcher crunched the numbers around total job losses under the UCP suggesting the number was around 36,000. With the announcement of 25,000 education layoffs later that month and the latest 11,000 AHS jobs shed last week, we are now in the neighbourhood of 70,000 jobs lost and counting in Alberta.

In a September Angus Reid poll, 55% of UCP voters and 46% of NDP voters said they felt worse off than they did a year ago. And only 24% of respondents indicated they expected things to get better within the next year. Only 33% and 38% of Albertans felt positively about Kenney’s performance on jobs and the economy, respectively.

The string of layoff announcements has no doubt contributed to the province’s dour outlook. But confidence isn’t the only thing suffering in the wake of Kenney’s self-imposed tailspin.

A 2019 report by The Alberta Council of Women’s Shelters' (ACWS) indicated that domestic abuse instances were at the highest they’ve been in ten years in Alberta. Advocates noted that times of economic crisis exacerbate already challenging circumstances that predominantly impact women and children.

Coupling these dynamics with the challenges presented by COIVD-19 makes the situation even more difficult.

While emergency shelters have been quiet as fear around using communal spaces has kept those seeking help away, shelter operators are bracing for a surge in need. And additional supports, such as counseling, are stretched beyond capacity. The Sexual Assault Centre in Edmonton had a five-to-six month waitlist back in March.

While food bank usage across Alberta seemed to be declining in 2019, demand was on the rise for Calgarians.

As demand outstrips capacity, people like Jennifer Rapuano-Kremenik are forced to create solutions to fill in the gaps. Rapuano-Kremenik says Harvest Hills Cares Calgary has started getting calls from people referred by AISH workers and social workers because they don’t know where else to send desperate Albertans who are running out of options.

“Another time, I got a call from a man who was distraught because he couldn’t provide for his family,” says Rapuano-Kremenik. “We helped him get into a hotel, feed his family, and get back on his feet.”

The man later revealed that he had been contemplating suicide and that without her assistance, he wasn’t sure he would have made it through the ordeal.

“When people call us, it's a last resort,” says Rapuano-Kremenik. “They don’t have the capacity to jump through hoops and meet bureaucratic requirements. They need help now. And we’re hearing from more and more of them.”

An October 2020 story in the St. Albert Gazette describes in grim detail the mental health strain that Alberta’s bleak job prospects inflict on many. Experts note that globally, “every one-per-cent increase in unemployment correlates with a 0.79 per cent increase in the suicide rate.” But the Gazette story notes that the correlation is even more pronounced in Alberta.

Jason Kenney and the UCP are engaged in a particularly dangerous economic game in Alberta. They haven’t just failed to create jobs – they’re actively destroying them.

Real lives hang in the balance as Albertans attempt to hold on, hoping that this time, maybe, somehow trickle down economics will work.

In the meantime, it’s grassroots, ad hoc food hampers for regular people struggling to get by and massive subsidies for unprofitable oil and gas companies that continue to fire people and divest from the province.

This is Jason Kenney’s Alberta.

Scott Payne is a political writer and organizer based in Calgary. From 2016 – 2019, Scott was the Southern Alberta Director for the Alberta NDP Government Caucus under Premier Rachel Notley. You can follow him on Twitter at @scotthpayne.

If you or your family need assistance from Harvest Hills Cares Calgary or can donate: