UCP leadership race power rankings: It’s all over but the groveling

Now that Danielle Smith has the UCP leadership race all but locked up, conciliatory trial balloons are being floated, emails are being exchanged between former rivals and phone calls are being made to friendly columnists.

This Don Braid column is a very effective bit of propaganda for the UCP and for Danielle Smith. It goes into some detail of what a Danielle Smith premiership would look like that and the conciliatory moves she’s already making.

Braid very kindly decided to run a quote from an anonymous MLA that sums it all up.

“There is no one in this caucus, not one person, who thinks a Rachel Notley-led government is better than a Danielle Smith-led government. The feeling is, let’s get our arrows pointed in the same direction.” 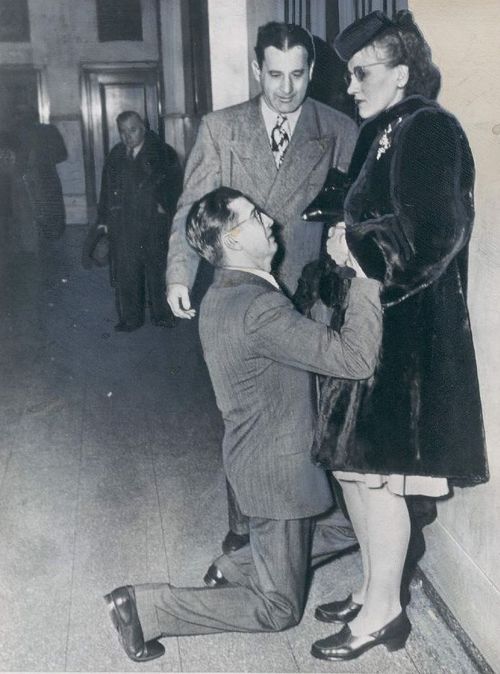 A man begging for his wife's forgiveness inside Chicago divorce court. 1948.

It’s also entirely believable that all the UCP MLAs and leadership candidates who said they’d never vote for the Alberta Sovereignty Act would turn around and immediately cave and vote for an Alberta Sovereignty Act. Nothing unites a fractured political project like losing your job or status. There’s all the perks, pay and power that come with a cabinet post (an extra $60K a year) or even just your ability to run as an MLA again since the leader of the party signs your nomination papers.

I expect we’ll all see a very rapid change of tune on how bad the Alberta Sovereignty Act is, not just from UCP MLAs but also Postmedia columnists and talking heads shortly after October 6.

This Rick Bell column imagines a sniveling UCP insider character that Bell creates dialogue for instead of Braid’s tactic of quoting them anonymously. But it’s the same message: Smith is going to win and the groveling has begun. While Bell mocks his made up insider character, don't think for a second that the coterie of government relations hacks and conservative insiders who surround this government like a noxious gas cloud will vanish if Smith wins. Smith has been around conservative politics for a long time and knows how things get done.

Kenney may decry Smith’s latest stunts—he would prefer his chosen heir Travis Toews win the leadership instead—but once you get past the Alberta Sovereignty Act theatrics there’s no big policy disagreement between the two. Smith will continue gutting the healthcare system, killing people en masse for “freedom”, handing over public assets to private interests for pennies on the dollar and the rest of the odious conservative political project with just as much verve as Kenney. Our only blessing is that she’ll only be premier for a few months before an election.

Some journalists have tried to ask the UCP candidates about policy. Michelle Bellefontaine of the CBC asked the candidates about healthcare, no one cared. Alanna Smith of Globe and Mail asked about the drug poisoning crisis that continues to kill so many. Crickets. What are the UCP leadership candidates going to do about this inflation crisis? Maybe fiddle with the small business tax.

This column was originally going to be about policy but the battle of ideas in the UCP leadership race lasted less than a week. There’s no significant policy disagreement between any of the leadership candidates, although Leela Aheer might want the UCP to be a bit more polite if she was leader.

So instead of doing a power ranking of the policies of the UCP leadership candidates I’m going to rank their wordmarks.

Boring dark blue, reverse text and a weird superfluous outline of Alberta next to the word Alberta mean this wordmark ends up last. The font is also a pricey one, Ysans Std Extra Bold. That goes for $80. For that money he probably could have gotten two bottles of Jameson’s for his Sky Palace dining experience.

Maybe I’m just biased against reverse text but Todd Loewen’s wordmark just isn’t doing it for me. I also don’t like the design choice to put the logo above the name and to have the slogan be skinny all caps. The font looks to be Marat Sans Bold Small Caps which goes for a cool $60.69 (nice.) There’s been a bit of custom design work here as well as the T and the L have been made larger though it just doesn’t jibe once you look at it for more than a second. This guy actually participated in the convoy in Ottawa and is now going to become a cabinet minister.

Another stale blue colour choice. Boring super common bold sans serif font that according to myfonts.com and my eye looks like Hamburg Serial Heavy. The little pop of light blue from the slogan doesn’t add much to a design that’s so focused on the big blocky name. Also she refused to sign the childcare deal with the feds until after a federal election making thousands of parents pay extra money for childcare unnecessarily.

We all love mountains and honestly it’s the visual element that brings this one all the way up four. I also like the font used used for the name even though I can’t figure out which one it is when I plug it into myfonts. The blue is tedious but standard. He’s also a politician who uses an “aw shucks” image to hide the fact that he’s a man living off the fortune his mom made when Fort McMurray became a boomtown.

I don’t quite know what that design element to the left of her name is but I kind of like it and it has some colour which is welcome. And the bold mix of the serif and sans serif fonts is a refreshing change from a sea of sans serifs. Shame about the blue.

She deindexed AISH and presided over an entirely unnecessary change to giving out AISH money that resulted in thousands of disabled folks being stuck with NSF charge but I do like the little pop of yellow and the font on the word Forward.

I’m a sucker for wheat and the two blues used in the name with the two blues in the outline of Alberta work quite well. Design wise it’s solid. It’s just a shame she wants to immediately cause a constitutional crisis and start feuding with Ottawa instead of actually making people’s lives better while our healthcare system crumbles to dust and the price of everything goes up.