On the campaign trail, Jason Kenney promised to depoliticize Alberta’s school curriculum, which he alleged was being injected with leftist ideology and “black armband history” by the former NDP government. But the paper trail shows that the UCP’s controversial replacement curriculum has repeatedly been sent to the Premier and his inner circle for approval—even before the education minister ever saw it.

This is confirmed by a freedom of information request. Early drafts of K-6 social studies curriculum that were being worked on by controversial curriculum advisor Chris Champion between September 9 through October 2, 2020, were redacted by government on the grounds that “the email attachments indicated on those pages went before Cabinet.”

These curriculum drafts were described on September 9 as a “work in progress and not complete” and an October 2, 2020 email described them as “working drafts.” The UCP’s new K-6 curriculum was released on March 29, 2021 to widespread criticism. Nearly 95 per cent of school boards are now refusing to pilot the draft curriculum this coming school year. However, all elementary schools will be required to use the new K-6 curriculum beginning in September 2022. 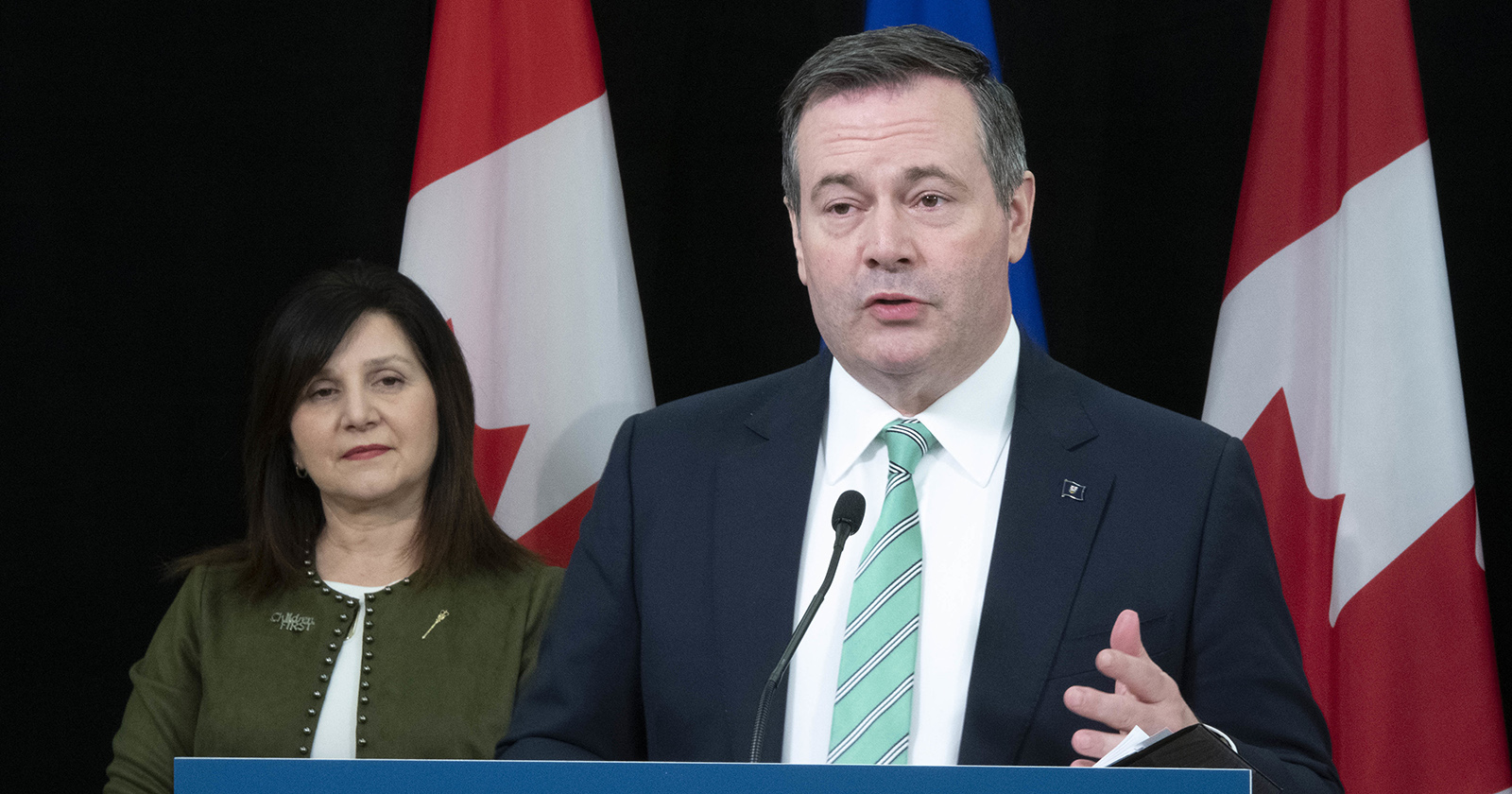 Premier Jason Kenney with education minister Adriana Lagrange on May 28, 2020. Photo via Government of Alberta.

Cabinet’s repeated reviews of the curriculum material represent direct political interference in the curriculum development process. And that’s not typical, argues Carla Peck, a professor of social studies education at the University of Alberta.

“In my experience it is very unusual for early drafts of a curriculum to go before cabinet for conversation and/or approval. It’s not something I've ever seen before and I’ve been involved in curriculum development in several provinces,” said Peck. Peck participated in the previous curriculum development process in Alberta, from 2016 to 2018 providing expert advice and feedback.

“It does raise questions for me about the political interference in the curriculum development process by this government. Which is highly ironic given the loud and boisterous complaints made by Premier Kenney and Adriana Lagrange and the rest of the UCP accusing the former government of being ideologically and politically motivated with their curriculum rewrites.”

"These findings confirm that Jason Kenney and the UCP have contaminated the curriculum development process with undue political influence. Education curricula development should be a non-partisan process but instead, Kenney and his cabinet are meddling in secret with what students should be learning in schools,” said Wing Li, communications director with Support Our Students Alberta, a public education advocacy organization.

Kenney’s rhetoric regarding what he deemed an over-politicized process was indeed heated.

“You’re not going to pull the wool over the eyes of Alberta, minister, we all know you’re going to use the school curriculum as a tool for social engineering. And we’re not going to let you get away with it,” said Kenney on August 30, 2017.

Chris Champion’s “vision” for the K-6 social studies curriculum is also repeatedly referenced throughout the emails between him and civil servants. “I am sharing with you the most recent working drafts of Culture, Philosophy and Religion K-6. The social studies team built this from your vision and previous feedback. They are looking forward to the additional feedback that you are working on to continue to strengthen these drafts,” says an October 2, email sent to Champion from an Alberta Education civil servant.

After it was found that Champion has a long-history of foul political statements, including denying that the Indian Residential ‘Schools’ were a genocidal project, the UCP attempted to distance themselves from him. But it is clear from the correspondence obtained in our freedom of information request that Champion’s vision was foundational in the design of the new curriculum.

“These documents show, yet again, that the level of involvement of Champion is indeed much greater than the government lets on. In fact, in these emails, the bureaucrats seem to be completely set on trying to achieve Champion’s ‘vision’ for social studies curriculum. He has clearly been involved extensively in drafting, editing and re-editing the K-6 social studies curriculum and this is profoundly concerning for so many teachers and Albertans generally,” said Jason Schilling, president of the Alberta Teachers’ Association.

Champion’s advice was so sought out that they extended his contract an extra week, into October, 2020. This contradicts statements from the government, who had claimed publicly that Champion’s work had ended in September.

Champion’s right-wing history journal, the Dorchester Review, spent several days after the revelation of the unmarked children’s graves in Kamloops producing inflammatory statements about residential schools. The account claimed that the Truth and Reconciliation Commission was influenced by “politics and cashola” and stated that Indigenous children went to residential schools because “in many cases their parents wanted them there.”

The Alberta government paid Champion $15,400 for 38 days of work providing advice on the kindergarten to Grade 6 social studies curriculum. Champion worked for Kenney as a staffer for 2007 to 2015 and was responsible for writing and overseeing the Harper government’s controversial citizenship guide.

Despite this relationship even the government of Alberta denounced the Dorchester Review's tweets, emphasizing in a statement that Champion was not involved in the development of curriculum for Grades 7 to 12 and incorrectly stating that his contract expired in September 2020.

But the actual paper trail is directly at odds with both Kenney’s claims that he was depoliticizing the process, and the government’s claims that Champion’s input was minor. Instead, the emails demonstrate a focused political project, with Champion as a key player, stick-handled directly by Kenney and cabinet.

The government of Alberta and Chris Champion did not reply to inquiries.