The police budget debate that’s coming this fall as Edmonton city council decides on the next four year budget cycle is set to get even more contentious as recently released budget documents show that the Edmonton Police Service has burned through its financial reserves and expects to run an unprecedented deficit of $5.4 million this year.

EPS cites a variety of reasons for the deficit: increased fuel costs, a pricey subscription to a rapid DNA testing service, decreased revenue from less traffic tickets and other EPS services—but most of the blame lies with excessive overtime pay.

According to the latest quarterly budget report EPS overtime is over budget “due to maintaining minimum staffing in the Community Policing Bureau and the Emergency Communications and Operations Management branch. Also contributing to the over budget position are increased costs required for staffing the Freedom Convoys and the NHL playoffs.”

This estimate does not include any policing costs associated with the Pope’s visit.

“It’s a concern but we still have a number of months left in the year where they can make substantive changes where they don’t end up in a deficit. The concern I have is if they don’t take the next few months to really dig in to figure out how to make sure they don’t run a substantial deficit,” said councillor Andrew Knack.

If the police do run a deficit there is a policy on the books, passed in 2018, which requires EPS to develop a strategy, approved by city council, to balance their budget over the next three years. This policy wouldn’t come into effect until that deficit position is confirmed at the end of the fiscal year. 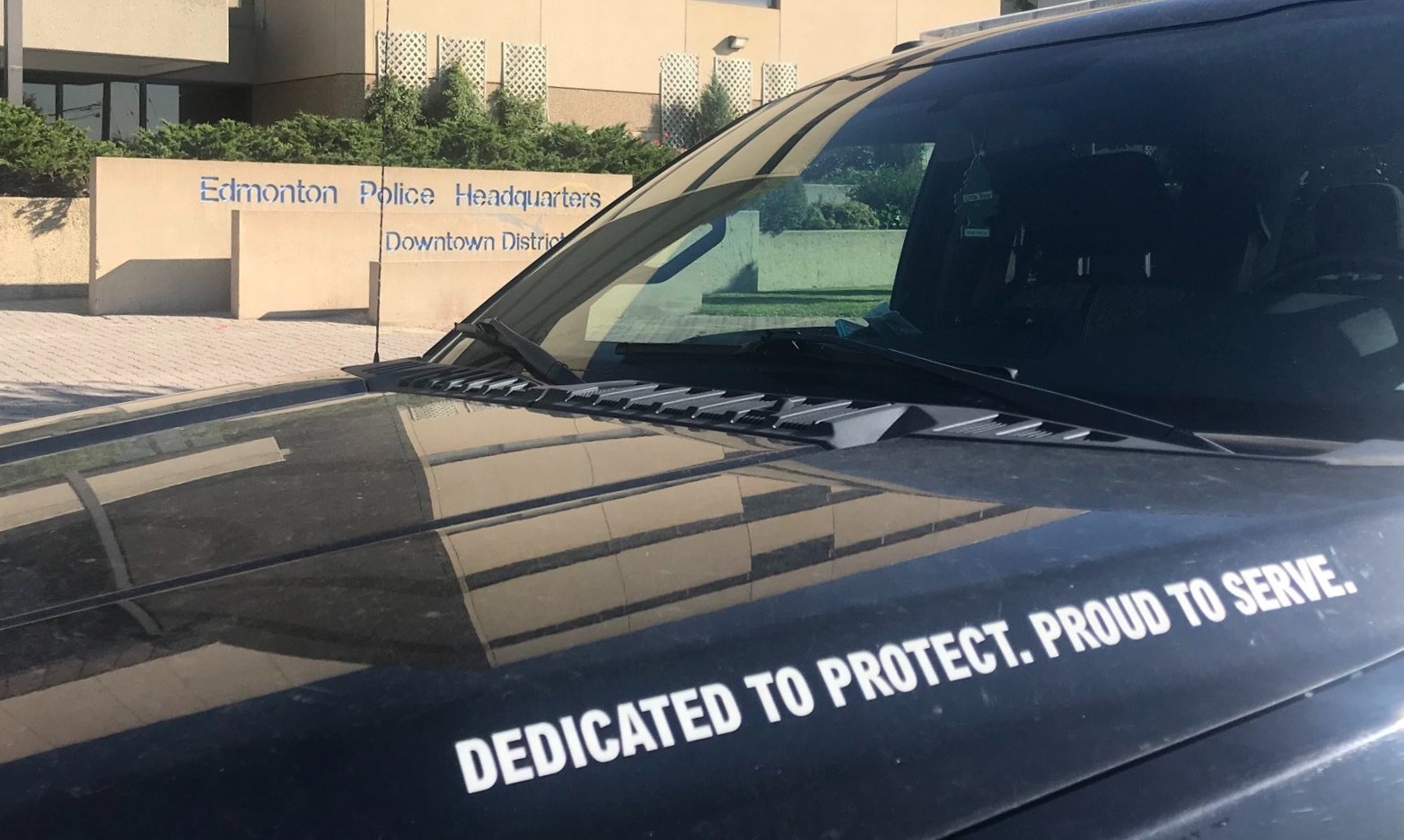 An Edmonton Police Service vehicle is parked out front of the EPS downtown district headquarters.

The Edmonton Police Commission is the civilian oversight body that is ostensibly responsible for monitoring and auditing the EPS’ financials.

“The EPC is aware of the deficit situation and is assessing options for how to manage,” said Edmonton Police Commission executive director Matthew Barker.

“Accordingly, and in alignment with Policy C605, any proposal to address this situation must go before Council for decision. EPC is unable to discuss or provide further information until that process unfolds.”

If the deficit isn’t rectified in the next two quarters, “then that will be reflected in the overall budget conversation that we’re going to have,” said Councillor Knack.

“No department should get a blank cheque and that’s generally how we’ve treated police in my time on council…This is one department where maybe there hasn’t been the same expectation of due diligence, and that’s going to change this year.”

The Edmonton Police Service will be receiving $407 million from the city of Edmonton this year, the single largest line item in the city’s budget. EPS, the Edmonton Police Association and local conservative and business figures lobbied hard to secure that number earlier this year,  leveraging public outcry over two murders in Chinatown to do so, though it was later revealed that EPS and the RCMP had been warned of the attacker but had simply declined to detain him.

“For some reason it’s an overly sensitive subject when you talk about the police budget. When you have councillors who are usually very diligent about going through every budget line and finding efficiencies, those concerns suddenly go away with the police budget which is frustrating,” said Knack.

Temitope Oriola is a criminology professor at the University of Alberta and he strongly supports having a well-funded EPS but he has concerns about the deficit.

“The EPS is a well-funded organization. Its share of the public purse is already quite significant. The EPS has been shielded from much of the cuts other units of government and multiple organizations have had to make or absorb,” said Oriola.

“The Edmonton Police Commission and city council need to provide a fair, robust and objective oversight of the current EPS deficit. The City Council should be wary of issuing a blank cheque or circumventing its budgetary processes. The city's resources are not limitless. We cannot continue to cut funding for social welfare services while increasing police budgets. It is not a wise approach to crime and disorder.”