You’ve seen the car, whether it’s in person or on the net. It’s hard to miss. The massive wheels, bright paint job, and the words “Free Palestine” in giant text on the side of it. It’s one of the most viral and talked about vehicles on Earth and so we tracked down Ayman Rayan, the creator of the “Free Palestine” car.

Ayman’s full-time job is customizing cars. We caught up with him on the phone from his shop, Cartrendz, in Edmonton, Alberta, Canada. This conversation has been edited for length and clarity. 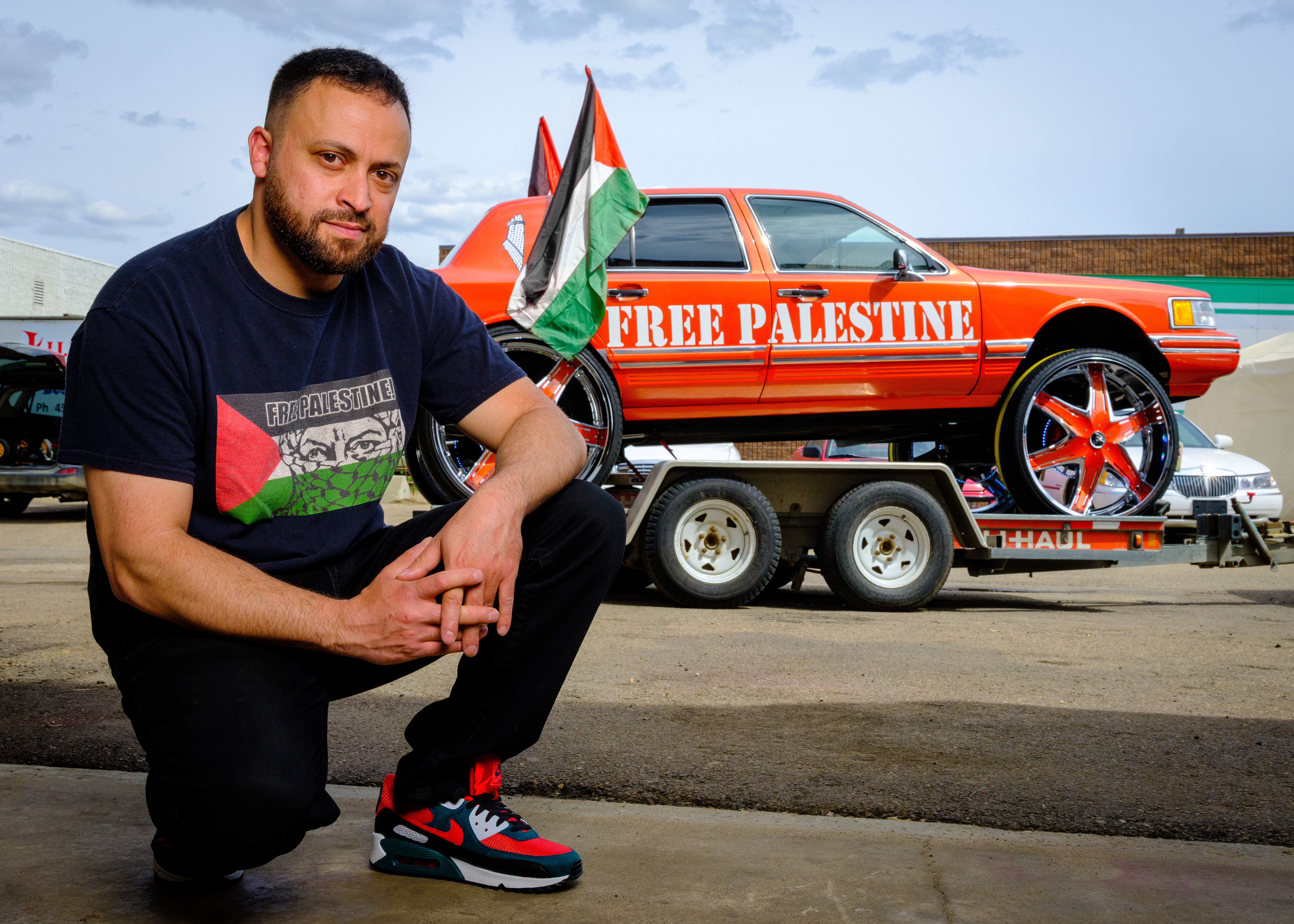 What are the details on the car?

"It’s a 1994 Lincoln Town Car. Custom paint job, orange with gold flake. The main feature on the car is the 32-inch wheels, which are the biggest wheels you can basically get. In order for those to work on the vehicle you have to lift the vehicle up like you would a truck, so that means this car has a 10 inch lift. And you have to trim the quarter panels and the wheel wells in order for these wheels to fit.

There’s an air suspension system that raises the vehicle up, down, side to side however you like. Full audio setup, 24 inch subwoofer in the trunk. 10,000 watt amplifier. Gull-wing doors that lift straight up. LED lights inside the wheels on the brake dust shields. Those LED colours are controlled through an iPhone app. Factory engine, pretty much stock. Just a cold air intake and custom exhaust. There are gearing modifications and cross-drilled, slotted brake rotors as well."

Why did you build it?

"I love it so much. Personal enjoyment obviously. But it became a huge advertising billboard. It turns heads wherever you go.

When I had the original idea I wanted it to be lowrider but during that time the big wheels and big rims started becoming popular. From 14-inches to 22-inches to 28-inches and now to 32. Once my business started to grow and develop I wanted to make a showpiece to show what I can do and to advertise my wheel and tire business." 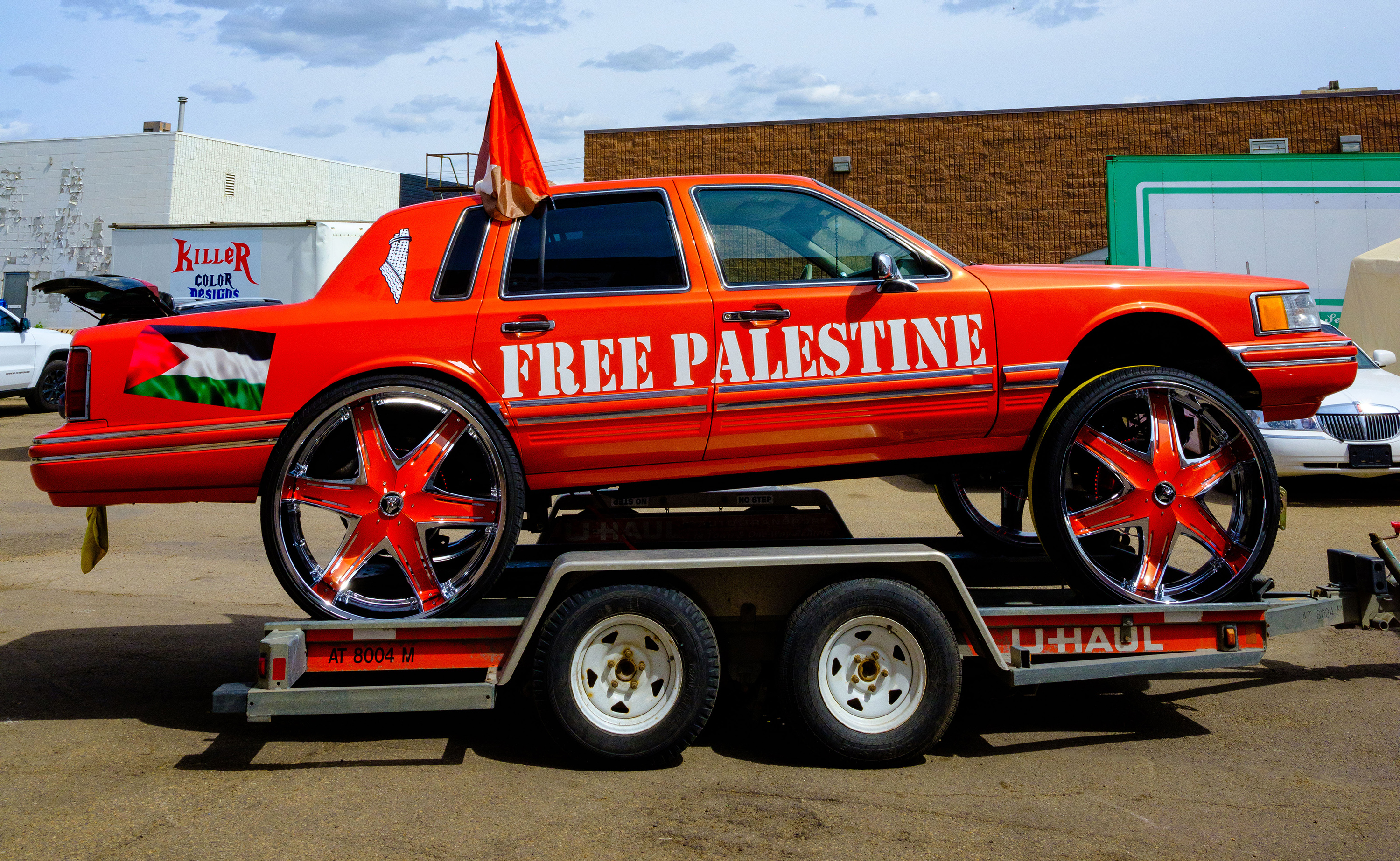 What happened to the original green “Free Palestine” car?’

"That vehicle had been on the road since 2005 and it always had the custom big wheels. We never had any issues, the car was really solid, people loved it.

I saw what was going on in Palestine, which is where my parents are from, and thought that if this car can turn heads then maybe I should put a political message on there. After that it went viral, it evolved. I originally built it for pleasure and the business and then I used it as a platform—to send a message." 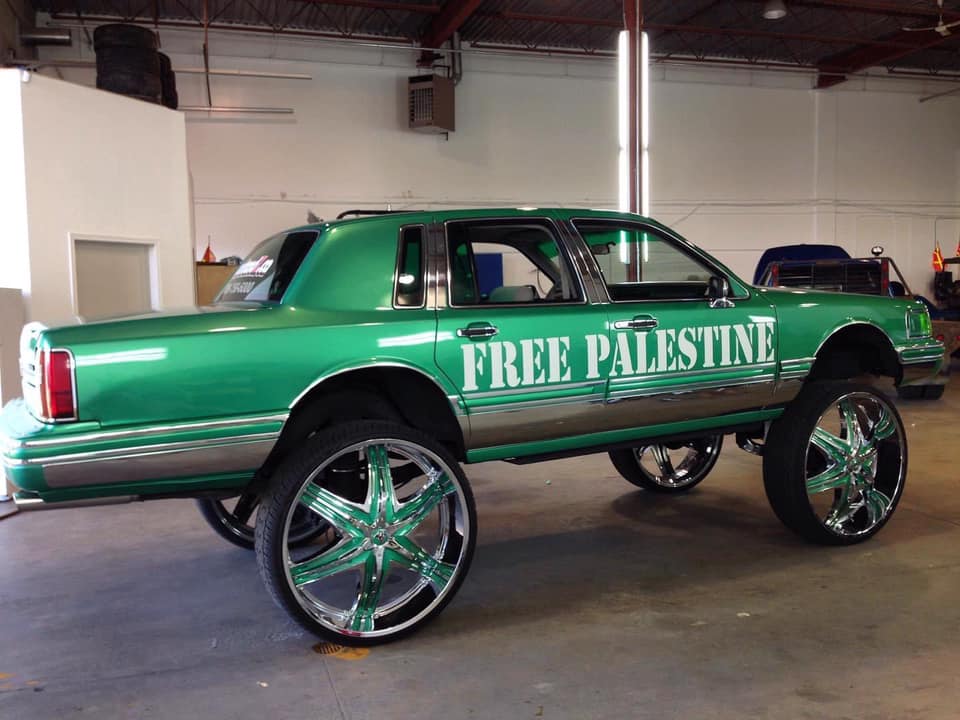 You ended up having some trouble with the police, right?

"A few months after it blew up online I got pulled over. I was leaving a parking lot and a police truck stopped in the middle of the road, no lights activated, just stopped. I was waiting for him to go but he was jumping up and down motioning me to get back to the parking lot so I did. He started looking at my car up and down like it was a UFO that landed from space.

That first time I was detained for nearly an hour. I eventually got six tickets, tinted, windows, bumper height, he wanted to ding me for as many things as possible. He deemed my car unsafe and gave me a list of things to fix. I wasn’t allowed to drive it home so I had to get it towed.

I did my research. Fixed everything they asked. Emailed him but he kept nitpicking everything. Eventually I got a letter that said that due to information given to Alberta Transportation, obviously by the cop, that the vehicle was deemed unsafe.

In order to get the vehicle back on the road it had to go through a salvage inspection. This is the most thorough inspection possible where you have to return everything to stock. You would do it after a car wreck to get a car back on the road. Essentially they took my car off the road.

A while later the same cop pulled up unannounced with another cop and an inspector from Alberta Transportation in an unmarked police vehicle right in front of my house. They said they wanted to inspect my car to determine whether it was safe. Me and my brother and my dad, who is no longer with us, confronted them. We asked them to leave. They didn’t. The cop tried to intimidate me while the inspector had on coveralls and got underneath my car. Eventually they left after he said they got what they needed.

I called up Alberta Transportation. They were very rude, they didn’t care. No information provided. We tried with the original green car, man we tried. I asked the inspector to show me what was unsafe so I could fix any problems. They refused. The people at the shop who I was dealing with got scared with the whole deal with the inspectors.

So eventually I said forget this. Why waste my time and money? I’ll build the same car again but in a different way. I salvaged as much as I could out of the old car and we built the car you see now." 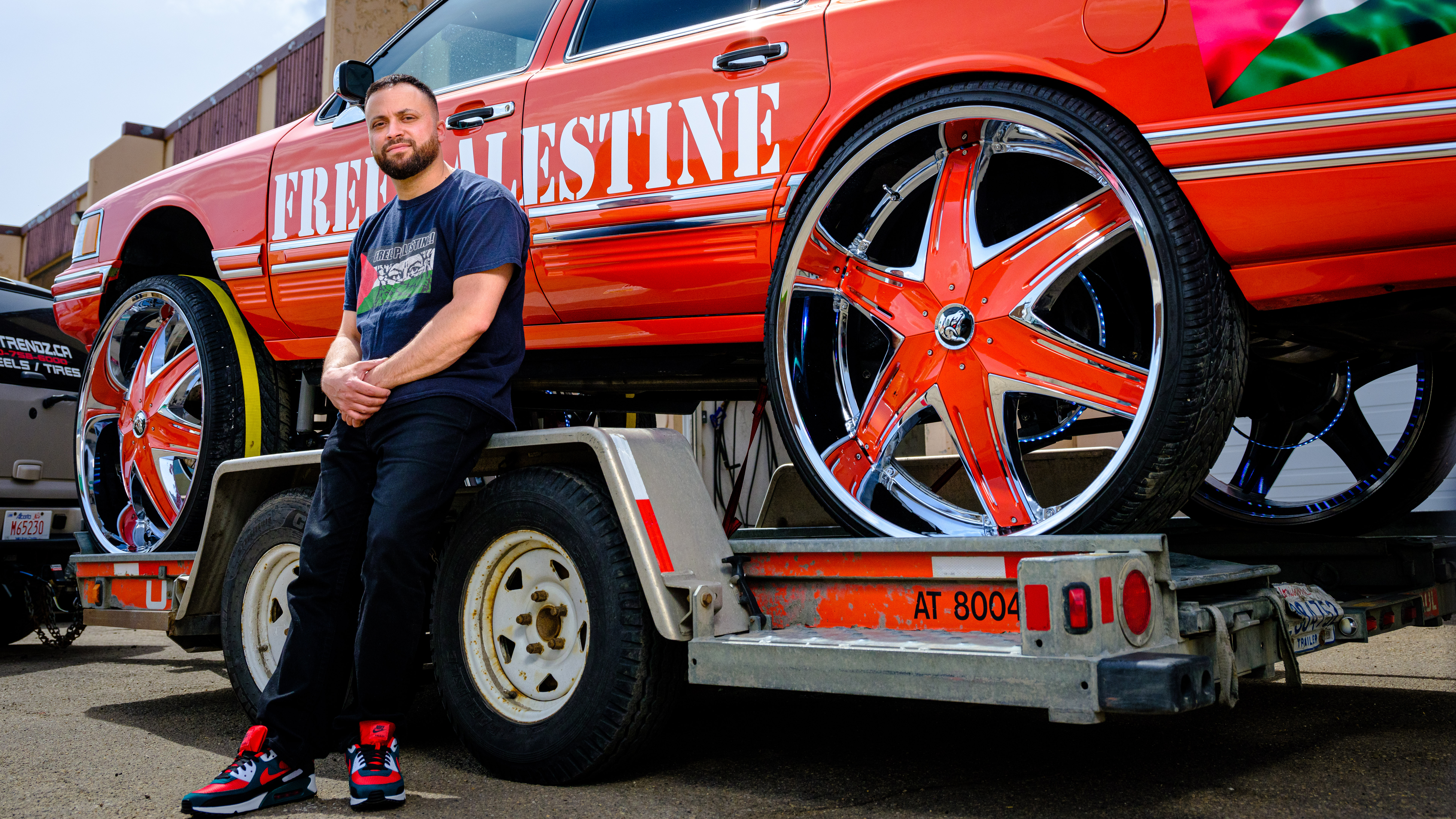 So is this red “Free Palestine” car on the road?

"We had the car out for the BLM protest this past summer and it went viral again. A few weeks after that I was stopped by the police again. I was talking with a very polite rookie cop but who was concerned about my bumper height and my lack of mudflaps and whatever. But eventually I look back and realize that the original cop is there in his vehicle! When I saw his face I was like, “again!”

I pulled out my camera. I put him on blast. This guy has nothing better to do than harass people with a nice car. We know what’s going on, it’s obviously harassment.

They didn’t give me any tickets. There was nothing wrong. No tint. Everything was legitimate. Passed a safety inspection easily. Roadworthy.

He gets out and he tells me it’s unsafe. That I have to get it towed. He’s smirking and smiling. Drawing up the same bullshit as before. He said I had a “cut frame” which is just not true. I had to tow my car again. Another hour on the side of the road being pulled over and harassed. My name and my business being dragged through the mud. I ended up following up and complained to the supervisor. He brushes me off. Fifteen minutes after that the same cop in the same police police truck comes rolling up to the shop to intimidate me and scope out my business. I go out there and yell at him but he takes off.

I called back the supervisor. What business does he have coming here? The supervisor starts stuttering. Apparently the cop was given a verbal warning by his supervisor and can’t talk to me anymore.

That’s when I got my lawyer. They’re in the process of dealing with the matter now. And now we’re doing what we can to appeal the matter and get the car back on the road.

Like before they’ve put a salvage inspection on this car as well, so we can’t drive it. So we’re fighting back. And now we’ve got another situation going on in Palestine so I brought it back with the decals. Free Palestine but also free my car, you know."

What’s your story? How did you end up in Edmonton building custom cars?

"I always loved tinkering with cars and machines. Started when I was young. Business wise it was a hobby in high school. I was skipping schools and installing stereos in the parking lot.

Landed a job working in a garage installing mostly audio. Then I started building my first car and went from there. 15 plus years I’ve been doing this—started working out of my house. Finally opened my business in 2008. My brother and I, he does the mechanical stuff I do the custom stuff."

What’s your relationship with Palestine?

"My father and mother were both born in Palestine, my dad came to this country in 1963. Hitchhiked through Europe, worked in Germany for a bit. Made it on its own at a young age and got an opportunity to come to Canada to work in agriculture. My dad did everything, he was a hustler. Ran a grocery store, sold cars. My mom was from the same town back in Palestine. They’re both passed away. Just me and my siblings now. We’re continuing what they taught us.

I was born and raised here in Edmonton. We went back to Palestine for one year when I was younger but because of the occupation it was very hard so we moved back to Canada in 1993 and we’ve been here ever since."

Do you know how popular your car is?

"Not really but kind of. I’m busy maintaining my business. A lot of people know about it which is good so I don’t mind."

Do you have a message for all the people out there who love and appreciate the “Free Palestine” car?

"I know I have my business and everything but I’m not shy about sending a political message of truth and justice for everyone to see. I don’t care if I lose friends or followers. I want this car to be an icon to show that you can incorporate your art, your business, and what you love so that we can spread the truth and a positive message to all." 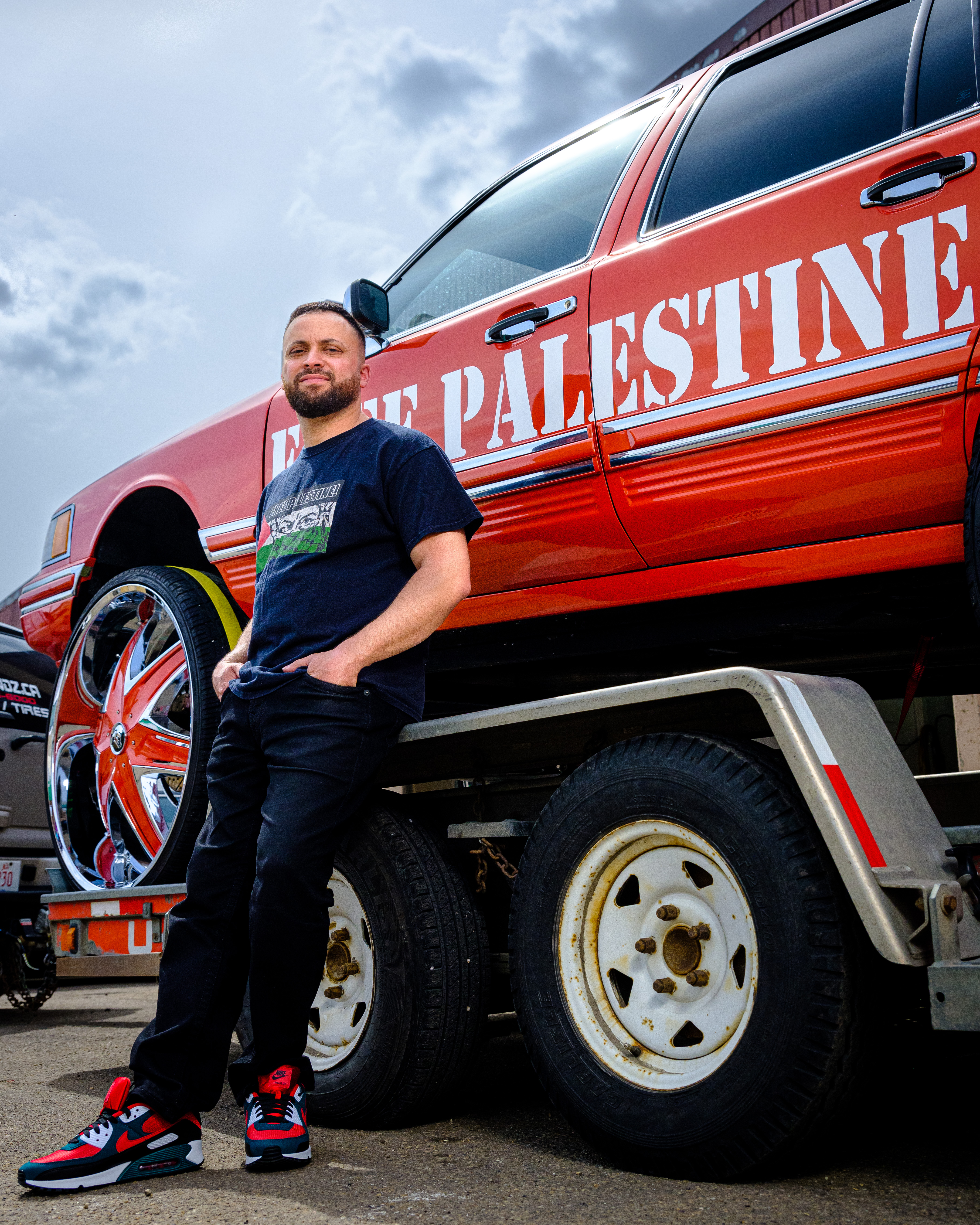