Edmonton’s historic relationship with the Inuit is one of death, loneliness and despair

The Edmonton CFL team has finally changed its name after years of Inuit and non-Inuit supporters speaking out against its name. Before the team finally changed the name, they claimed in an online survey that the name was “originally chosen more than 100 years ago out of acknowledgement, perseverance, and hardiness of Inuit culture.”

The team actually got its name from Calgary sportswriters in the 1890s who were mocking teams from Edmonton for how cold and northern their city was. Several sports teams in Edmonton then took up the name ironically. But I knew the story of a much different relationship between Edmonton and the Inuit. One of the strongest and most tragic connections between my people and the city of Edmonton is one of death, loneliness and despair all centred around the Charles Camsell Indian Hospital. Hundreds of Inuit came to the hospital in the ‘40s, ‘50s and ‘60s to be treated for tuberculosis. Many never returned home.

A city can change the name of their football team, but it can never change the history of lives lost and dismantled inside of a medical institution. On a recent walk in the area amid all the new construction that surrounds 128 Street and 115 Avenue, the old Camsell stands tall and stark. There have been several new windows placed into the aging structure but the redevelopment of the building into condos has been long delayed. 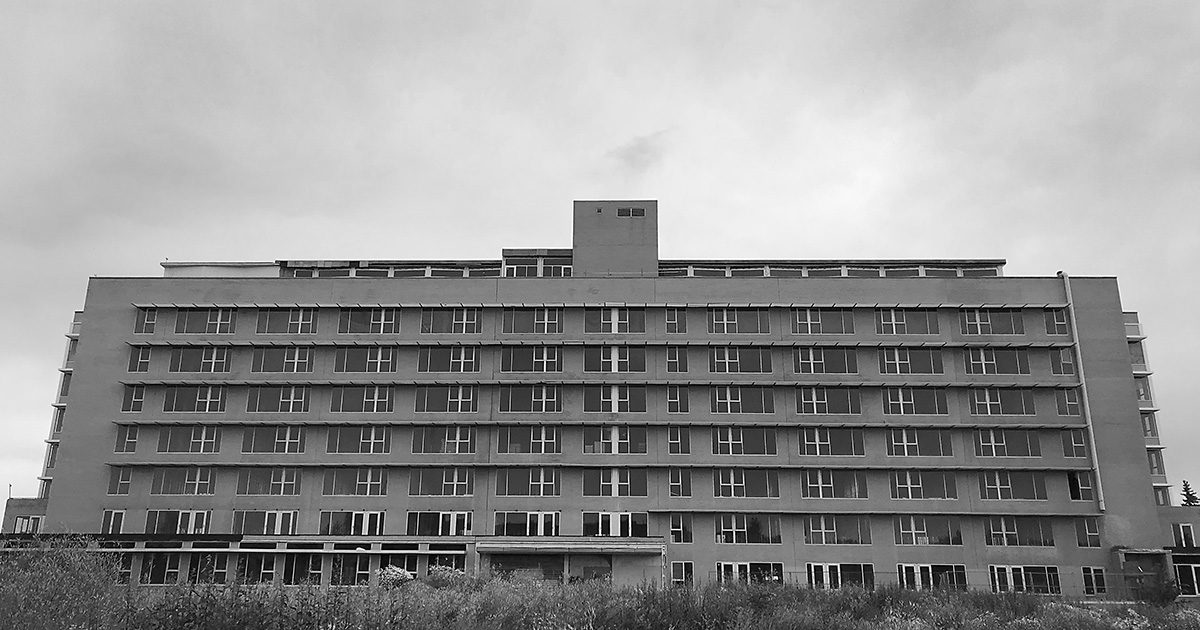 But when I stood there and looked at it again, I wondered how anyone could move into it. How could anyone think they could create a quiet life inside of a building that is loaded with the remnants of a medical genocide? Mixed with loneliness and heartache? How could anyone set up their lives in a building that was the site of so very many Inuit deaths. Inuit tears. Inuit loneliness. I stood there and thought, quviahunngittunga, I am sad.

I thought of all the Inuit who never returned home. Never saw their moms and dads smiles again. Never hugged a sister or brother again. Never stood in front of a husband or wife one more time. I think of the Inuit who were housed inside that hospital as Inuit who were without. Without love, comfort, and family. The elements that are required for real healing. I stood there and thought of how many Inuit spirits still wander through the Camsell hallways and who keep looking for those who loved them best. A spiritual searching and hoping for one familiar face. An eternity spent in limbo.

The official story is that when Inuit died at the Camsell they were buried in the St. Albert residential school graveyard. There is a cairn at the St. Albert public cemetery that remembers the 98 Inuit that are buried at the cemetery in unmarked graves. Thirty-one of those named on the cairn were children under the age of four. Some have their age marked as “baby,” and who may have contracted tuberculosis from their mothers. Names on a plaque, a representation of the colonizer playing catch up. 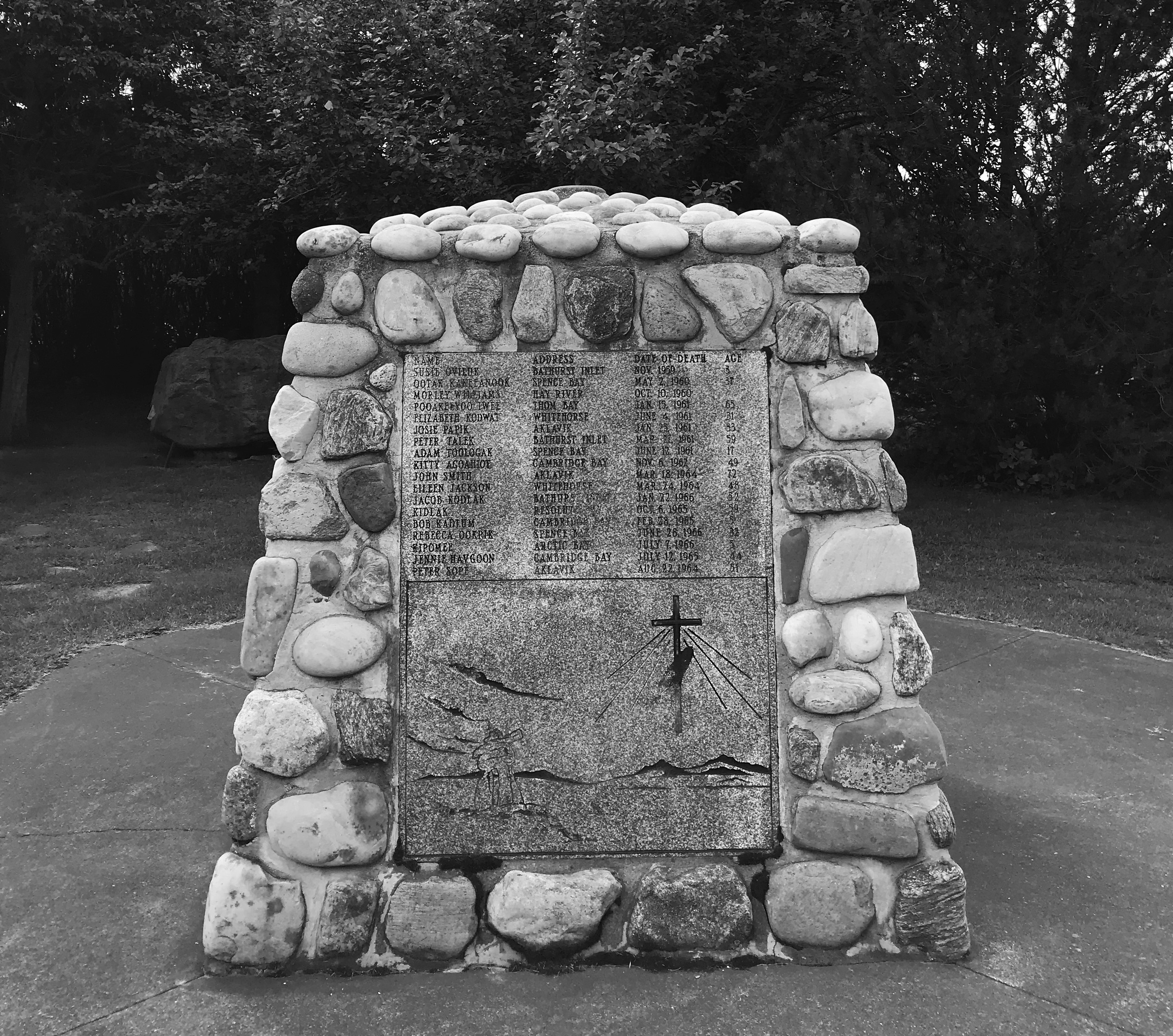 For some reason, the government of the day thought it was impractical to set up sanatoriums in the north and to have Inuit heal at home. The colonial hand thinks it knows best as opposed to having Inuit in the care of their own, in their own communities filled with the love of family.  In the eyes of our colonial past and present, we would never know what is best for us. How can we?

Inuit in Canada continue to contract tuberculosis at a rate of 290 times higher than all other Canadians. One of the reasons, according to a 2018 government of Canada report, is that “housing can be so crowded that residents sleep in shifts, as it is all too common for more than 20 residents to call a four bedroom house a home.” For the population living south of sixty, the idea of living with 20 or more people under one roof is unthinkable. In the south we rarely even know who our neighbours are.

Inuit in Canada carry all the statistics that no one else wants. The highest rate of poverty, and food insecurity with many parents eating once a day so that their children can eat three times a day. The lowest levels of completing high school with a 35 per cent high school graduation rate in Nunavut. The saddest stat is that Inuit carry the highest rate of teen suicide. Future generations extinguishing themselves because they can not see a bright future. 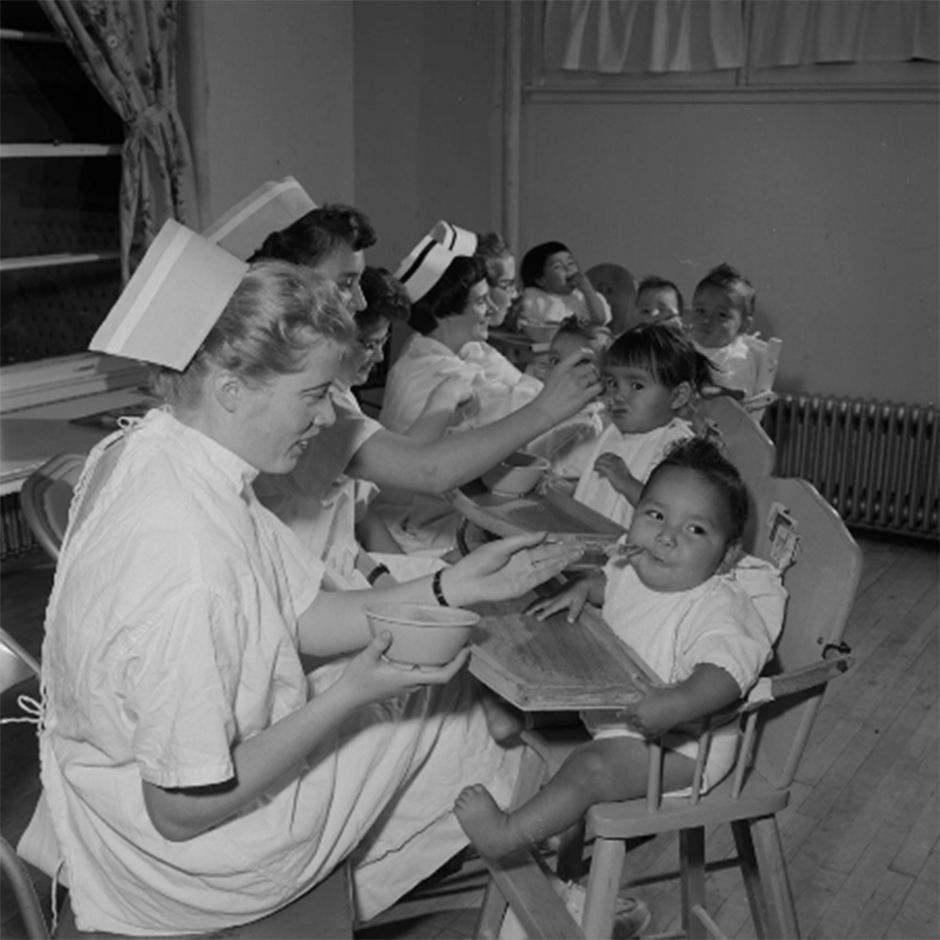 Nurses feeding Inuit babies in high chairs at the Charles Camsell Hospital in Edmonton Alberta. Photo taken in 1958. From the National Archives.

Yet here in Edmonton the local football team had the audacity to say their team carried a moniker to honour the hardiness of Inuit while ignoring their true-life conditions. While the team spouted that public relations talking point the real connection between the city of Edmonton and the Inuit was a hospital that locked down hundreds of Inuit who never got home. The complete ignorance of the colonizer shines from the past into present-day.

Calvin Bruneau, the chief of the Papaschase band in Edmonton believes the southeast corner of the Camsell is a burial ground and contains unmarked graves of First Nations, Metis and Inuit children who died while in the care of the colonial medical system. Their names were never released into public record, and their bodies never returned home. Dub Architecture who is redeveloping the old hospital into condos has said that there is no evidence and have reassured the city of Edmonton that work will be halted, “if any bone is found” during the construction. Bruneau has asked for the province and the federal government to pay for an archeological dig to look for these remains. And before any further construction goes ahead, we need to know whether there are the remains of First Nations, Metis and Inuit children on the property.

Edmontonians should understand what Inuit went through inside the walls of the Camsell. Prime Minister Justin Trudeau issued an apology to the Inuit in 2019 for the mismanagement of the tuberculosis epidemic between the ‘40s and the ‘60s. He said, "We are sorry for forcing you from your families, for not showing you the respect and care you deserved. We are sorry for your pain. …The racism and discrimination that Inuit faced, was, and always will be, unacceptable.” 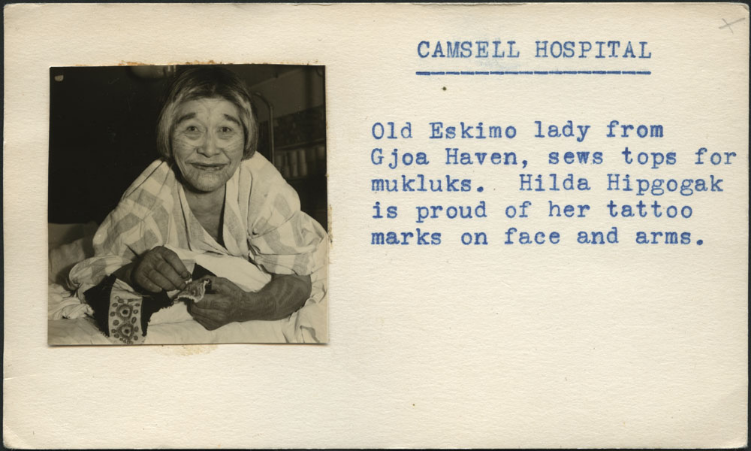 Hilda Hipkogak sewing tops for kamiik at the Charles Camsell Hospital in Edmonton, Alberta. Photo taken between 1956 and 1960. From the National Archives.

It is not okay that Inuit were rounded up like animals and placed onto ships that brought them south for treatment of an illness that they may or may not have had. It’s not okay that the Charles Camsell Hospital received full federal payment for the long-term medical treatment of Inuit and that when that treatment was completed they were released onto Edmonton city streets with only the clothes on their backs and no airplane ticket to get them back home.

We get a sense of the loneliness and isolation that those Inuit at the Camsell must have felt now that we are living in the midst of the COVID-19 pandemic. People have experienced quarantine and the isolation that comes with it firsthand. Now imagine doing that thousands of kilometres from home in a totally alien environment you’ve never visited before, with your caregivers speaking a language that is foreign to you. 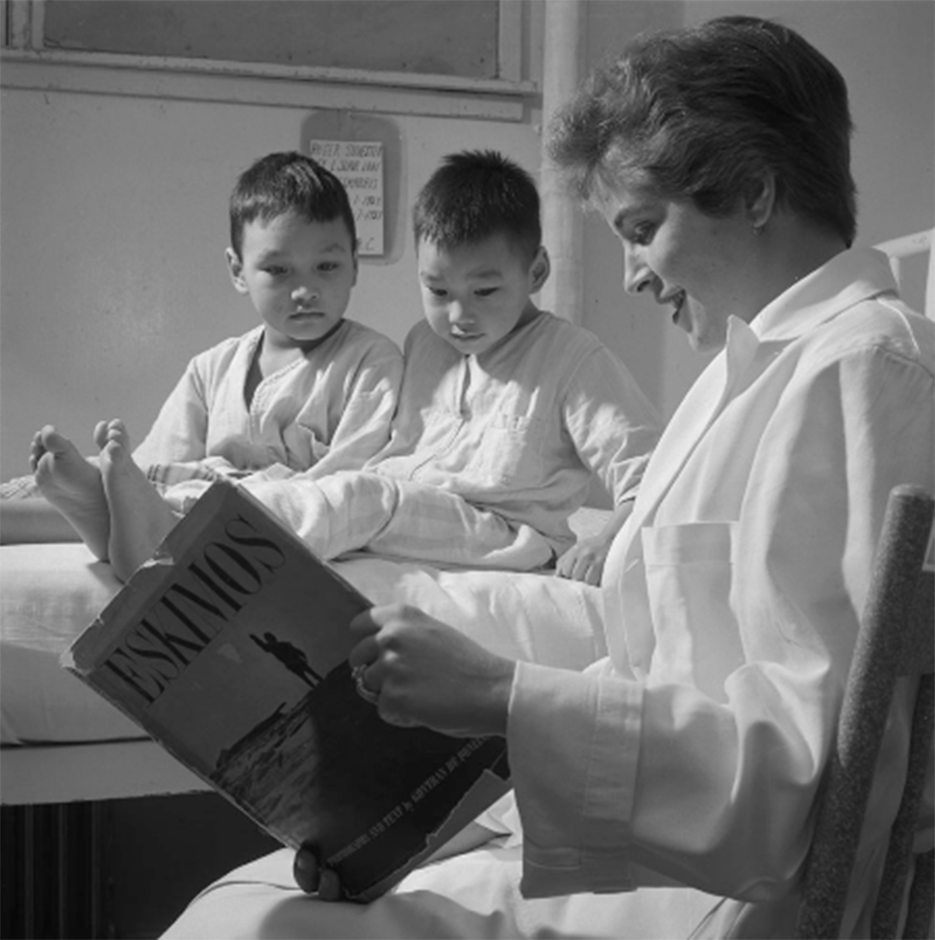 Nurse Gallagher reading a book to two Inuit boys at the Charles Camsell Hospital, Edmonton, Alberta. Notice the name of the book. Date when photo was taken is not known. From the National Archives.

Naukkuuqpit  (Where do you pass through?)

When I came to this place I had a cough.

It was a red cough and it hurt me.

My bones cried with pain and my heart kept beating.

I didn’t understand.  How could this be?

When I came to this place, I had to lay in a white bed.

A white bed with white sheets and white lights.

The people were white too, white people in white dresses.

White dresses or white shirts, they told me words

but I couldn’t understand and my heart kept beating.

I didn’t understand.  How could this be?

I could look out the window and see more white people.

White people in black cars, sometimes lots of cars and

Then all the cars would disappear and come back again,

Later in the day.

In this place even the nights are white.

I couldn’t understand and my heart kept beating

I didn’t understand, How could this be?

There were other people there who coughed like me

They talked a little bit like me, but they didn’t close their words right.

They brought me white food,

I couldn’t understand and my heart kept beating

I didn’t understand. How could this be?

One day, after many days of white nights and lights,

My heart stopped beating and my red cough was still.

Now I lay in this place, under the ground and I know

Itqumilaq  (that is how it is)

Reflections on the Charles Camsell Hospital mass burial site in Edmonton, AB.  There is said to be 22 bodies of aboriginal children buried in the east garden on the current site.  It has never been excavated.  The bodies and identities of these children have never been returned home or acknowledged , nor have their families been notified of their deaths.  All hospital records from the time of the tuberculosis era of the hospital have been destroyed.  Five of the children are said to be Inuit. (from Eskimo Pie: A poetics of Inuit Identity by Norma Dunning)