Edmonton’s CFL team has still not changed its racist team name despite pressure continuing to mount on multiple fronts.

Two “premier” corporate sponsors, insurance company belairdirect and online sports betting portal Sports Interaction, have asked the team to change their name. Boston Pizza and the Rec Room have both chosen to not be corporate partners with the Edmonton CFL team for the 2020-2021 season with the Rec Room saying “we support their review of the team’s name and encourage them to do the right thing,” in an emailed statement.

Progress Alberta (the parent organization of the Progress Report) has also launched a campaign with Norma Dunning, an Edmonton based Inuk writer and researcher. The campaign asks people, in the ongoing struggle against colonization and in the name of reconciliation, to send the corporate partners and sponsors of the Edmonton CFL team a simple message – change the name or end your relationship with the club. Using this simple email tool sends that request to 36 separate corporate sponsors.

“Eskimo is an outdated word. It’s rude, it’s insulting. It’s something we never called ourselves. We should be calling people by what they call themselves not something chosen by white people. It’s time to get rid of it,” says Dunning. “I have five grandchildren and no one better call them an Eskimo in front of me.”

And as we saw with the Washington NFL team when major sponsors start to revolt things start to happen. After belairdirect issued its ultimatum the Edmonton CFL team said it “would keep an open mind” about a name change and expedite a recently restarted consultation process with Inuit, their partners and other stakeholders to finish at the end of July.

But the Edmonton CFL team is going to try and keep its name if it can. We can see that with the recent survey they put out with polling and research firm Abacus Data. It was an obvious push poll where the main goal seemed to be to test out which of their various excuses for keeping the name would work best.

One survey question even said that the team’s name was “originally chosen more than 100 years ago out of acknowledgement, perseverance, and hardiness of Inuit culture.” The name actually started in the 1890s and originated as a mocking insult created by Calgary newspaper writers for how cold and northerly Edmonton is. Various sports teams in Edmonton then took up the name ironically. Curiously the team seems to acknowledge this fact in a recent comment they gave to the Globe and Mail on the origin of their name.

The survey closed after less than 24 hours of being live.

Details of the team’s “extensive year-long formal research and engagement program” with the Inuit are starting to leak out and they show the lengths the team will go to and the spin they will employ to keep the team name. They originally refused to release any details beyond that “there was no consensus among the Inuit people and considerable support for the Eskimos name among Inuit in various parts of northern Canada.”

Board chair of the team Janice Agrios released selected numbers from a poll they had done of the Inuit and their support for the name in their annual general report. For an example of the torqued way the numbers were represented Agrios led with the unverified information from their poll that 78 per cent of western Arctic Inuit opposed the team changing the name. Which sounds like a lot until you consider that western Arctic Inuit make up only 7 per cent of the Inuit population that live in their traditional territory of Nunungat. In Nunavut (where nearly two thirds of the Inuit who live in Nunungat reside) their unverified poll found that 55 per cent opposed changing the name and in the eastern Arctic found that only 31 per cent people opposed changing the name.

These numbers were also released without methodology, survey sample size or margins of error. When properly weighted for population distribution the poll that the Edmonton CFL team commissioned themselves on whether Inuit people supported changing the name was likely within the margin of error of 50 per cent support or opposition. If team leaders are going to cite the results of their poll to the media and to the public the Edmonton CFL team should release the poll in its entirety.

The origin of the word Eskimo is uncertain with various scholars attributing it to French, Cree or even Latin. Regardless of where the word came from it’s not an Inuit word.

Natan Obed, the head of Canada’s national Inuit organization Inuit Tapiriit Kanatami, told the Globe and Mail that “straw polls on racism are unethical,” and that the Edmonton CFL team’s name is a vestige of another time and the debate around it has been damaging to Inuit and damaging to reconciliation in the country.

“Inuit are not mascots,” he said.

“We are not play things for professional sports franchises. The idea that any ethnicity is a mascot or a moniker for a for-profit corporation is over.”

These game programs from the 1960’s certainly seem like a vestige from another time. 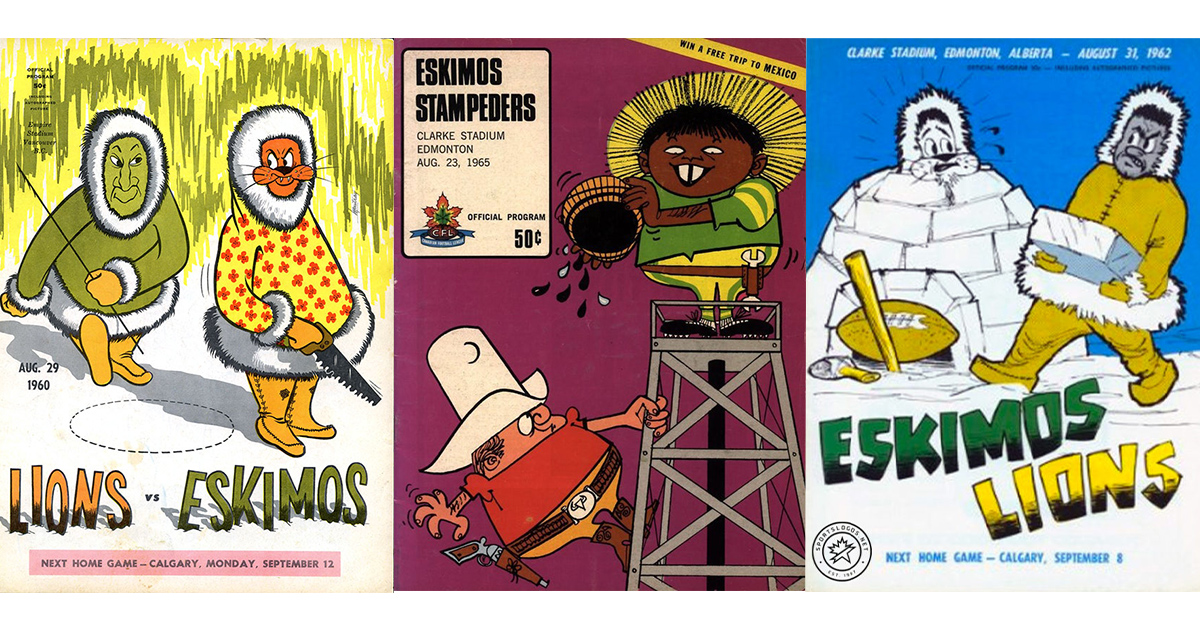 Mumilaaq Qaqqaq is the member of parliament for Nunavut and she was unequivocal in a conversation she had with Postmedia.

With these on-the-record and well publicized statements from Inuit leaders it’s incredible that the Edmonton CFL team leadership continues to try and hold onto the name. The pressure and the stories won’t stop. There is one easy way to solve this problem – change the name.