As we look in horror upon the escalating police brutality against people of colour and their allies in the United States, we must acknowledge that Black people in Canada are subjected to many forms of racist and unjust policing, such as carding, as are Indigenous people and people of colour.

It’s time to ask: are we devoting too much of the public’s resources to policing? 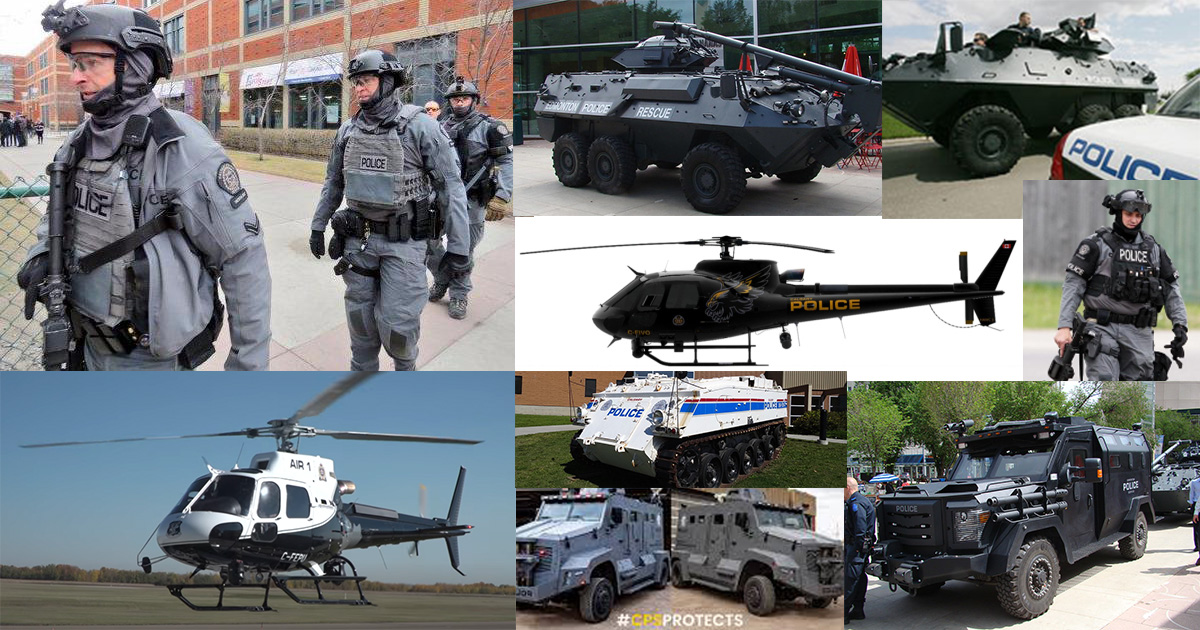 The city of Calgary is struggling under the weight of austerity--some self-inflicted and some imposed by the province. The UCP government has hacked away their tax powers while also downloading costs formerly covered by the province onto the city. Council is reluctant to properly draw revenue from businesses and wealthy property-owners. And the massive $275 million+ arena giveaway to the owners of the Calgary Flames has left a glaring hole in the books.

Nearly every city department has been hit with severe cuts, except one: the Calgary Police Service.

In 2019 CPS was the largest single line item in the entire Calgary budget. At $401 million, the police receive a massive 16% of all city expenditures. The next largest budget item, public transit, received only $253 million.

And what kind of social programs are going to see less money while the city sinks hundreds of millions every year into the Calgary Police Service? Little things like the low income transit pass, the youth employment centre or after school programs for kids.

“We should get three,” said Councillor Diane Colley-Urquhart to the Calgary Herald in May 2019.

Councillor Jeromy Farkas, who has called for across the board cuts to a huge swathe of city services, layoffs and tearing up contracts with city workers is likewise, a big fan of police whirlybirds.

“Calgary was actually the first municipal police agency in Canada to have a full-time patrol helicopter program and it’s pretty clear that it’s proven its value ever since,” Farkas said.

Farkas did not elaborate on what that value might be or how it had been proven.

There is also very little oversight provided by council on the police budget. The Calgary fire department says what they’re going to purchase with their equipment capital budget ask – things like fire hose nozzles, thermal imaging cameras, defibrillators, power equipment and extrication equipment.The Calgary Police Service does no such thing and simply asks for $2.6 million to replace police equipment with no mention of what they’re going to buy with that money.

“By the end of 2019, the Commission maintained there was simply no more flexibility to make cuts without changing the trajectory of Calgary’s police service. Council agreed and did not make any additional cuts to the 2020 budget,” says the commission in their latest annual report.

Edmonton’s social development budget for 2019 was $38 million. The social development budget includes housing and homelessness (a shamefully low $11 million per year) as well as funding for preventative social programs to reduce domestic violence, sexual violence and to reduce urban isolation and mental health as well as many other worthwhile initiatives. The severe underfunding of these programs often leaves social welfare calls and mental health checks to be dealt with by police, rather than trained social workers, often resulting in more incidents of violence by police against marginalized people.

Just like Calgary, Edmonton spends $7.5 million a year on replacing police vehicles. That’s nearly 70 per cent of what the city spends on housing and homelessness.

In 2018 Edmonton city council locked in a funding formula that will see property taxes go up 1 per cent each year, on average, over the next three years. Every cent of that additional revenue is earmarked for the Edmonton Police Service’s ever expanding budget. Thanks to these budget increases the EPS is adding a fourth tactical squad, a fourth surveillance squad and a new electronic surveillance team.

Yet while the police budget increases every year the city is also experiencing a $212 million budget shortfall--and that’s before accounting for the impacts of the coronavirus pandemic and the global oil crash. Further pressure on the budget is coming from above, thanks to a grab bag of UCP revenue cuts and cost-downloading.

But while the city responds with austerity and cuts for other departments, council approved $6 million for “specialized police equipment” in the last capital budget without even requiring EPS to explain what that equipment would be.. By contrast, Edmonton’s fire rescue service also had a multi-million dollar budget ask for specialized equipment, but in their request they accounted for what the money would spent on – things like breathing apparatuses, rescue equipment, thermal imaging cameras and the like.

The Edmonton Police Service also borrowed $6.2 million from the city of Edmonton in order to purchase a new police helicopter. And the boondoogle of the northwest police campus that had to have its roof replaced before the building even opened continues. It’s unclear if police have even begun to occupy the building which was supposed to open in early 2019.

Our priorities could be different

And every year your city’s police budget goes up while the budget for the things that actually improve the lives of citizens goes down. Across the border, we see what happens when cities abandon their responsibility to invest in communities and instead pour money into over-policing. And the border is not a magical line--policing in Canada and the US share the very same problems.

Over-policing forces vulnerable people into antagonistic situations with police that all too often have tragic outcomes. Yet many of the same social problems we awkwardly try to hammer into shape with policing can be addressed more gently, and more effectively, by social welfare programs, health care workers, social workers and by housing the homeless. We could, today, re-allocate hundreds of millions of dollars away from helicopters, armored vehicles, and war-zone style surveillance towards solving real problems in our communities.

If you agree that it’s time for our cities’ priorities to change, then join us in calling on our city councils to divest from these bloated police budgets.

Progress Alberta is proud to be supporting a letter campaign organized by local anti-racist activists calling for this badly-needed change.

Please click here and stand with us by calling on your mayor and city councillor to stop giving a blank cheque to police and start putting our public resources back into our communities.