The only school board in Alberta to take advantage of a last minute rule change that permitted schools to operate without mandatory masks is located in the heart of a COVID-19 hotspot.

The Fort Vermillion School District (FVSD) in northwest Alberta published their relaunch plan on Sept. 7 and in it there are six schools, all in the communities of La Crete and Buffalo Head Prairie, where masks are not mandatory.

These schools are located in MacKenzie County, a region which has the second highest per capita rate of COVID-19 infections in the province. And in the town of La Crete, population 1860, where there are multiple active COVID-19 outbreaks listed according to Alberta Health Services, La Crete Continuing Care Centre, Heimstaed Seniors Lodge and an entry simply described as “family gatherings” are all listed as active outbreaks. 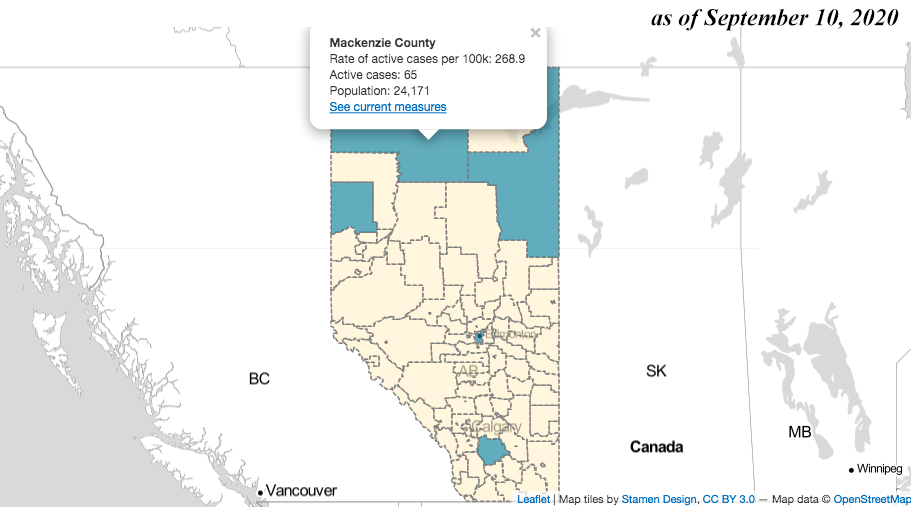 Dr. Deena Hinshaw mentioned this school district by name in her Sept. 8 press conference and discussed the measures in place that allowed her to approve their plan.

“We are allowing schools to implement enhanced physical distancing measures as an alternative to mandatory masking if a school can make sure that two metres is maintained at all times outside of seated class instruction,” said Hinshaw on Sept. 8.

The measures that are being implemented by the Fort Vermillion School District include cohorting, allowing only one cohort in a hallway at a time, staggering class transitions, shutting down common spaces and eliminating school transition times.

Hinshaw’s approval of FVSD’s plan means that students at those particular six schools won’t have to wear masks on buses or in hallways. Mike McMann, the superintendent of Fort Vermillion School Division describes it as every class essentially being a one-room schoolhouse.

“I believe our plan goes above and beyond,” said McMann. “I think you will see more plans similar to this one but we were the first one.”

The FVSD has already had a staff member who tested positive for COVID-19 at one of their schools.

Order 33, the controversial public health order signed only a few days before the relaunch of schools, is the rationale behind FVSD’s exemption from masking requirements. Dr. Hinshaw argued in a press release shortly after the introduction of the order that the exemption option had been provincial policy for months, but that had not been the impression of parents and teachers. The president of the Alberta Teacher’s Association, Jason Schilling was “stunned by this reversal” and tweeted out “This goes against everything we’ve been told for months.”

Wing Li, communications director with public education advocacy group Support our Students Alberta, argues that the protocols around masking and physical distancing from the government need to be improved.

“The messaging around masking has been chaotic and confusing, and even more so now if individual schools can just be exempt from masking altogether. This inconsistency is dangerous. The measures the schools provided attempting to justify the masking lift do not truly acknowledge the real day to day movements of students and staff in and out of common spaces and class rooms,” said Li.

“The key is accepting the reality that physical distancing cannot be maintained exactly 100% of the time in confined hallways with large crowds of students. Indoor masking in common places is a strategy to supplement when these lapses occur.”

Support Our Students Alberta is maintaining a tracker for every instance when a school has had to notify parents of a confirmed COVID-19 infection among staff or students. Li is concerned about the harm being done to the public education system. “One has to wonder how far the government is willing to go to make public schools increasingly unsafe in this pandemic to undermine the public education system.”