On November 18, Bradshaw and city manager Andre Corbould announced that the plan to contract the 100 cleaner jobs had been cancelled. As well, the workers now have long-term stability; in an interview with Progress Alberta, Bradshaw said the city has “clearly made it a part of the budget process right through the next four year budget cycle.”

He credits the success of the campaign to the membership of ATU Local 569 who trusted the core team and participated in many solidarity events throughout the year. The core team, essentially a membership engagement team, started campaigning when December 2020 budget discussions revealed that privatization was on the table. They began with an “I’m in” campaign, simply asking members to declare that they were all in for this fight.

By the time the privatization plan was announced, the core team anti-privatization campaign had already begun. In addition to ATU Local 569 members, several councillor and mayoral candidates wore buttons in solidarity during the summer of the 2021 municipal campaign. As a candidate, Mayor Amarjeet Sohi—a past executive board member of ATU Local 569 who received the union’s endorsement—pledged to work to retain the jobs in house.

During early 2021, the core team collected more than 1500 member signatures, about 70% of the bargaining unit membership, and ran a social media awareness campaign saying no to the privatization of public transit. The core team also mounted a banner action at a July 28 transit funding announcement where then Mayor Don Iveson was speaking alongside Infrastructure Minister Catherine McKenna, featuring photos of more than 1500 ATU members opposed to the RFP. 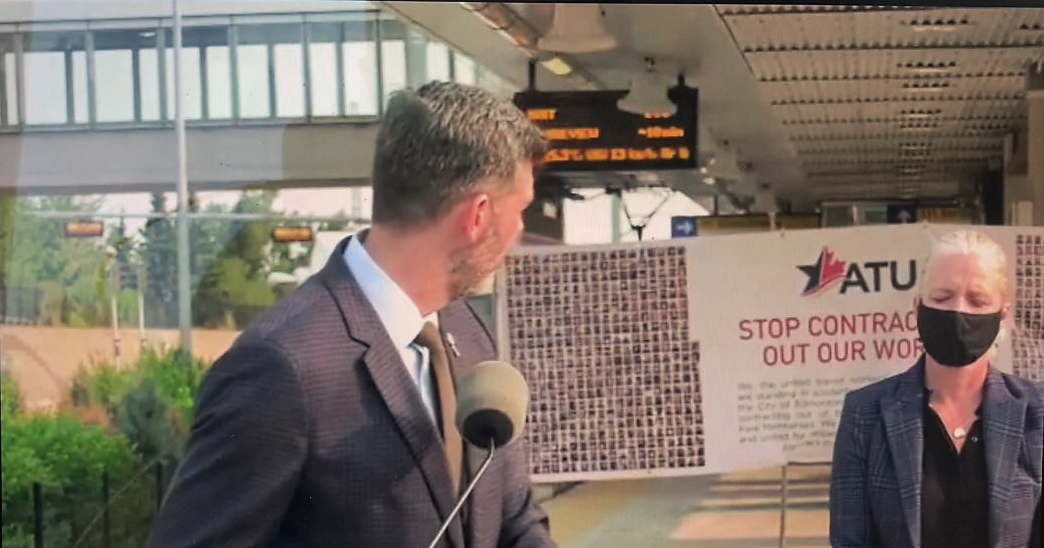 The response from members to the November 18 announcement has been extremely positive, says Bradshaw, who was elated by the win. “I was comforted that these people no longer had to worry about their jobs, could go to work and not worry about getting a pink slip the next day,” he said. “It was a great feeling, believe me.”

With this victory solidified, ATU Local 569 now faces a slate of other critical issues. The union is currently negotiating or about to start negotiating collective agreements for the St. Albert, Red Deer, DATS, and main Edmonton bargaining units. The latest offer from the city was voted down by 93 per cent of the membership, and Bradshaw said job security is a primary concern for the union.

The union is also concerned about privatization of jobs as plans proceed for regionalization of transit in Alberta. Bradshaw said that city staff have cut the union out of conversations about the business plan for regional transit and implications for union membership. “They have a commission, a corporate entity, and a CEO,” he said. “And the CEO has three or four employees already.” And yet, the union has no information about how those regional transit jobs will be staffed.

When ETS shifted to a new “on-demand” service for 37 Edmonton neighbourhoods this April, those jobs were contracted out to Pacific Western. This required resources at ATU to mount an organizing campaign to certify the 100 workers—many of whom were City of Edmonton employees until the on-demand privatization— into a new bargaining unit.

That certification election has been held and the ballots have been counted. The only thing holding it up is an unfair labour practice complaint from the City of Edmonton.

Tactics from this win will inform future campaigns the union will have to fight against transit privatization. “They ran event after event after event all year long” to get this result, said Bradshaw. “When it came down to there being a solution at hand, we got down to work and got it done.