Anti-vaxxers protesting outside of hospitals makes my heart hurt

If you ever want to despair for the future of our species, attend an anti-vax rally outside of a hospital. Benita Pedersen, a DJ and karaoke host organized an anti-vax protest of around 80-100 people outside of the Royal Alexandra Hospital in Edmonton on Monday, in concert with more than a dozen other anti-vax protests outside of hospitals across Canada.

I walked up to the Royal Alex to see it with my own eyes, and what I saw there sickened me. Aside from one exhausted and justifiably angry nurse who came out to speak with the media (and got into a bit of a back and forth with Pedersen) the protest was relatively drama-free. In Edmonton, at least, the demonstrations haven’t escalated to the point of patients being heckled or ambulances being blocked—yet.

But seeing people protesting against medicine outside of a hospital that is in the midst of the most brutal wave of COVID yet just makes your heart hurt. At least there was also a lively counter-protest, and there were dozens of nurses and healthcare workers in their scrubs and PPE who noticed that counter-protest as they came out to see what was going on outside their workplace, a workplace that is increasingly on the verge of collapse.

Our biggest hospitals in our biggest cities are cancelling surgeries. Ambulance shifts are being cancelled across rural Alberta because of staffing issues. Red alerts—where there are no available ambulances to respond to emergencies—are now frequent events Alberta's ICU capacity is now at 148% and while they’ve brought in surge capacity to deal with the extra patients the nurses and doctors working those surge beds are not trained in intensive care.

And while the 4th wave has hit unvaccinated people the hardest, all of us have to pay the price when our hospitals are swamped with COVID patients. Stories of cancelled or delayed cancer surgeries are now commonplace on social media. Even my colleague Jim, who you usually hear from on Progress Report newsletter day, is stuck in limbo for an operation he badly needs. Heaven help if you have a heart attack or stroke or get into a serious accident.

The 4th wave isn’t just the consequence of bad judgment, it’s a wave born out of cruelty. And I say cruelty because we could have avoided all of this, but the Premier and the UCP chose to throw us all in the meat-grinder just to score a few points with right-wing voters. Jason Kenney needed to fundraise and flip pancakes at the Calgary Stampede and so Alberta was declared “open for summer.” But since Kenney’s “Mission Accomplished” moment he’s been a ghost. Barely visible. Alberta’s political leadership has abandoned us.

An open letter signed by 67 infectious disease physicians from across Alberta was sent to Kenney on Monday. It calls for vaccine passports in order to access non-essential business. If the government won’t do that then it must institute a lockdown in order to restrict the spread of COVID. Vaccine passports are not perfect and have the potential to be abused by the state, but they have been shown to dramatically increase vaccination rates. When our vaccination rates are as bad they are in Alberta the time for waffling is over. It needs to happen.

Over the weekend I read many people commenting online that they want police to crack down. Justin Trudeau even pitched a new law against hospital protests on Monday, and Jason Kenney is musing that maybe this justifies his ‘Bill 1,’ the Critical Infrastructure Defence Act—even though the Act is about pipelines and railway blockades, not hospitals. Folks, be careful what you wish for. Bill 1 is bad law, originally written to go after Indigenous land defenders and environmentalists protesting fossil fuel projects. We shouldn’t legitimize the UCP’s anti-democratic projects, and the thing is, we don’t even need to.

You don’t need a Bill 1 for police to disrupt a protest outside of a hospital because the police already have that authority. The police can set up protest zones at their discretion and arrest people for mischief. If you’re wondering why they aren’t doing so already, I can only offer that some of those who work forces eat the paste that’s for horses.

Jim and myself and all the writers and organizers in the Progress Alberta orbit do what we do because we believe a better world is possible and that it’s worth fighting for. But wow, does a day like this ever test your faith. So with that I’ll leave you with this photo of Sue Huff, one of the counter-protesters and someone whose message brightened my day right as I was leaving this doomfest. 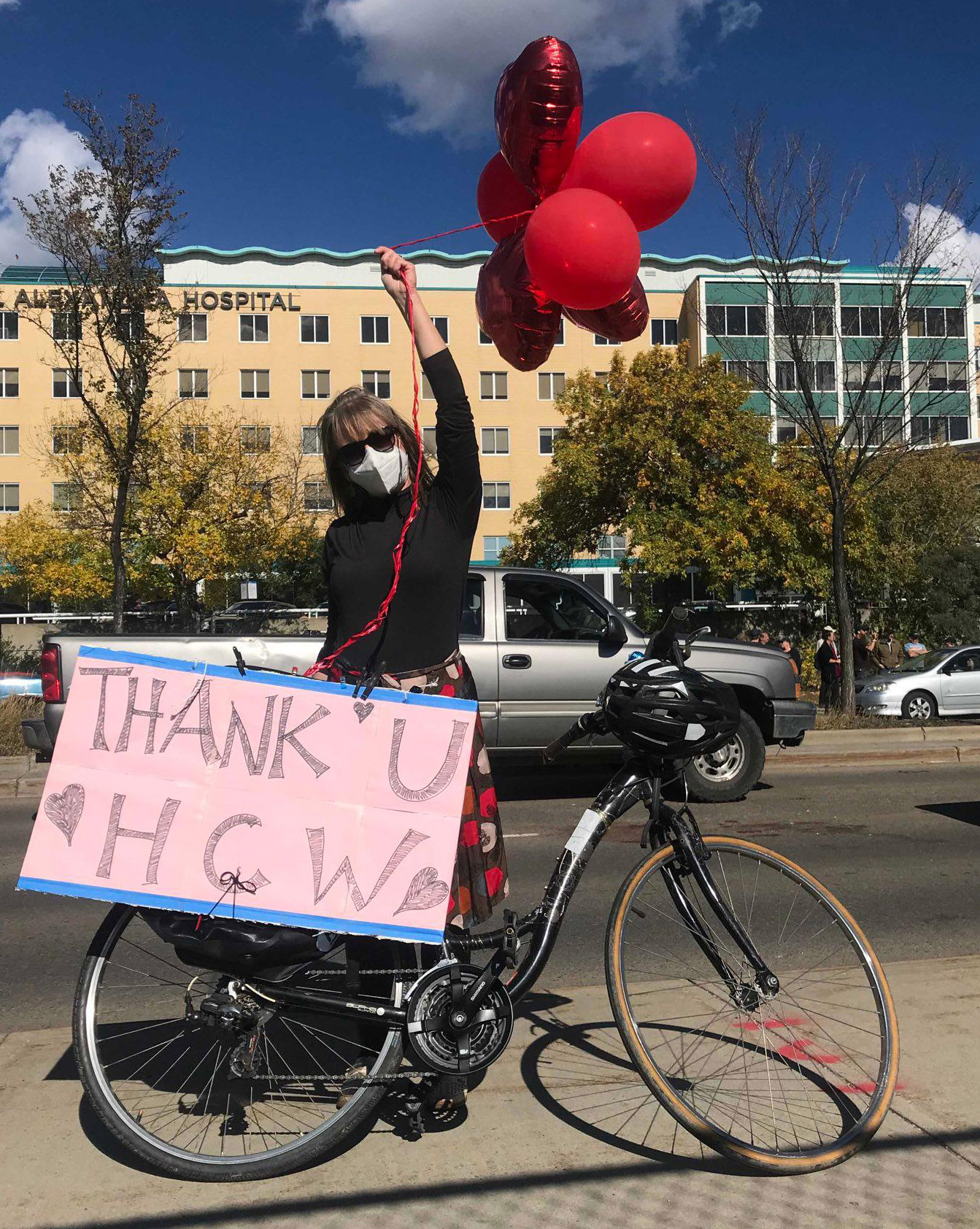 A bit of good news on the COVID front as almost all major post-secondary institutions in Alberta (with the exception of Red Deer Polytechnic) are bringing in a vaccine mandate. Good.

The UCP’s union busting Bill 32 is still in limbo and Unifor, the largest private sector union in the country told Kenney to pound sand. "Jason Kenney will not have an impact on the activities of Unifor. Zero," said Unifor president Jerry Dias. "As a matter of fact, the more foolish legislation he passes, the more eager I am to defy it."

I couldn’t fit this into the top line story but John Carpay compared the light restrictions people have had to face in Alberta during the pandemic to the internment of Japanese-Canadians during World War 2 and falsely claimed that thousands of people had died from COVID vaccines. You may remember John Carpay as the dear friend of Jason Kenney’s who he once described as Rosa Parks. Carpay also compared the rainbow flag to the swastika and hired a private investigator to tail a Manitoba judge. Postmedia is sponsoring his latest soiree.

Left-wing and gaming legend Yanis Varoufakis is keynote speaker at Public Interest Alberta’s next AGM on September 22. We recommend it.

Correction: An earlier version of this post misidentified Benita Pedersen as a People's Party of Canada candidate. We regret the error.