The government told us that they could reopen schools safely, they were wrong: Leaked memo shows 22 Alberta students hospitalized since September, 2 in ICU

On Dec. 3, 2020, Support Our Students Alberta, a public education advocacy organization, obtained a copy of an internal Alberta Health Services staff memo that states “Since September, 22 students from Alberta schools have been hospitalized for COVID-19 with two being treated in ICUs.”

These severe student outcomes are not included in the Chief Medical Officer of Health’s regular press conferences. This is information every parent should know and shouldn’t be tucked away in an internal memo. The Alberta government has consistently downplayed the severity and spread of COVID-19 in schools and this shows that serious health conditions are being hidden from public view.

When asked at a press briefing by the Progress Report why this information isn’t shared prominently with parents, the Chief Medical Officer of Health referred to data tables halfway down on a “Severe Outcomes” statistics page that show ages. The page has no dates, and is not advertised during briefings, but based on the leaked memo we now know 58 per cent of the hospitalizations for students in Alberta schools have happened in the last 3 months.

Under a section “Hospitalizations and ICU” the internal memo also lists other Alberta school-related COVID-19 statistics:

The information contained in this memo raises alarms and suggests that the Alberta government is failing to share vital information with the public. 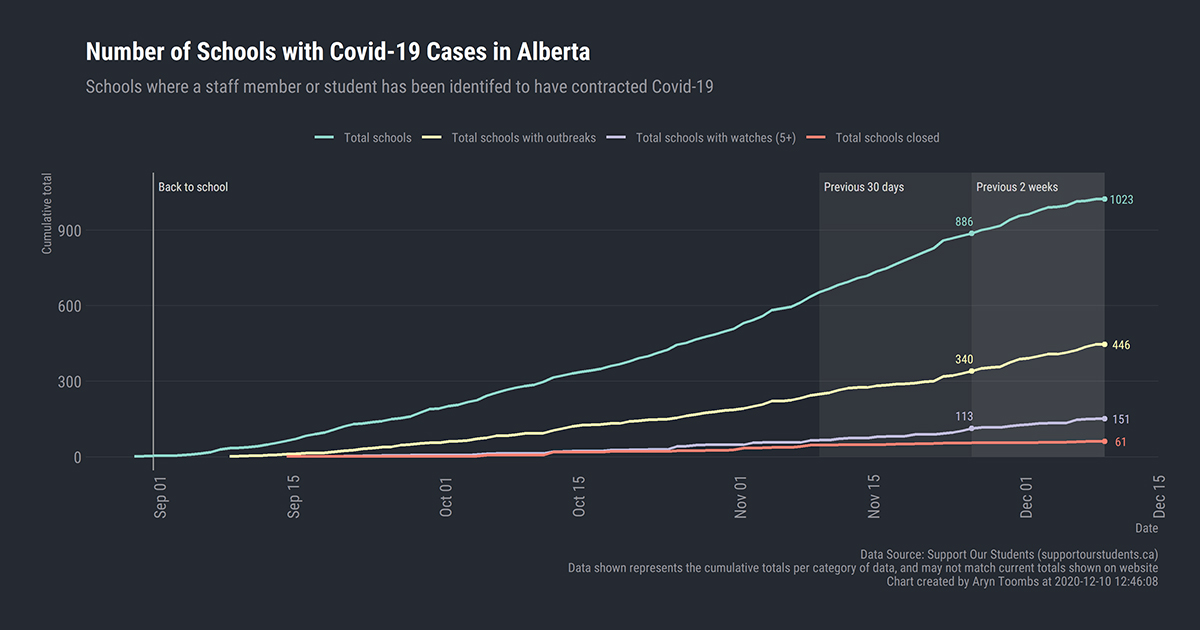 Worse than we know

Alberta schools re-opened in September under Scenario 1: near-normal conditions. In the past 3 months, over 1000 schools have reported cases affiliated within their school population, with probable in-school transmission in over 300 schools.

Despite this data, in the past 3 months, the Alberta government & CMOH have consistently maintained that in-school transmission has remained low and a low percentage of school members have been impacted by COVID-19. However, as of December 8, 2020 about 18% of schools currently have active COVID-19 alerts and outbreaks. And tens of thousands of students and staff across the province have had to isolate after a close contact with someone with COVID-19. That sounds like an impact to us.

Support Our Students Alberta has closely monitored the growing case numbers in schools and has persistently voiced concerns over the inadequate support for public schools to mitigate health risks and educational impacts. Furthermore, the government’s lack of transparency related to school statistics resulted in SOS launching an independent Alberta School COVID-19 Tracker that has garnered over 1 million views from over 250,000 Alberta viewers. The government launched their own map of school outbreaks after public pressure, but their outbreak numbers have been consistently lower than the crowd-sourced information on the SOS Tracker.

In November, contact tracing in schools collapsed, and AHS could not keep up with the backlog of soaring cases. SOS received a high volume of reports wherein parents weren’t notified by AHS that their children were exposed until the 2-week quarantine period was nearly over (notification on day 13 or 14). There are even reports of school boards and education staff being forced to do the work of contact tracing themselves. The truth is there is just a lot we don’t know about how COVID-19 is being transmitted in our schools, and the government is keeping the public in the dark.

While the Alberta government has asked school authorities to do more with less during a global pandemic, and maintain the overall image that schools are not driving transmission rates, they have not adequately addressed the emerging evidence on asymptomatic transmission in children.

According to a University of Alberta study released on Nov. 27 more than one-third of children with COVID-19 show no symptoms. It’s very likely that the official number of students found to have officially contracted COVID-19 is but a fraction of the real world number. Even with a fully functional contact tracing system it might be impossible to tell if schools are driving more infections than is currently believed.

We also still don’t know about the long-term development health impacts of contracting COVID-19. There are troubling media reports of so-called “Long COVID” in school-aged children with a frightening list of symptoms.

The government of Alberta abandoned students and parents with their incompetence, inaction and negligence. There was a way to re-open schools in a way that was far more safe. Instead, schools got a bucket of hand sanitizer and a few cheap masks. While the proportion of hospitalizations in these ages is low compared to other age cohorts you can’t simply wave away the real effects students have had to face. We could have done better, the government chose not to.

Even worse, the leaked memo shows that the government is keeping important information from parents and caregivers. The statistics show that our government badly botched the reopening of schools and their COVID-19 response. Public trust has been eroded. The Alberta government needs to swallow their pride and stop sacrificing the health of students and education workers just to save face. In the next 6 weeks, the Alberta government needs to come clean about their abysmal school response. When Premier Kenney announced the shutdown of in-school classes for grades 7-12 on November 27, he was essentially admitting that cases in older grades were exploding out of control.

Students, parents, caregivers, teachers and education workers need this government to finally prioritize safe schools. In August, Support our Students & the Coalition for Safer School Relaunch put forward 12 strategies to achieve this. In the next 6 weeks, we need to see the government step up and supply schools with direct, multi-faceted resources to maintain safe and consistent education. If they fail to do so despite this glaring evidence accrued since September, it would be absolutely reckless, and a generation of Alberta students will pay the price.

Wing Li is the communications director of Support Our Students Alberta