Content warning: This story discusses residential schools and the deaths of children. If you are experiencing trauma or feeling triggered, help is available 24/7 for survivors and their families through the Indian Residential Schools Crisis Line at 1-866-925-4419. Mental health support for Indigenous peoples is available through the Hope for Wellness chatline at 1-800-721-0066 or using the chat box at https://www.hopeforwellness.ca/.

“Finding one grave is too much. Finding multiple is incomprehensible.” 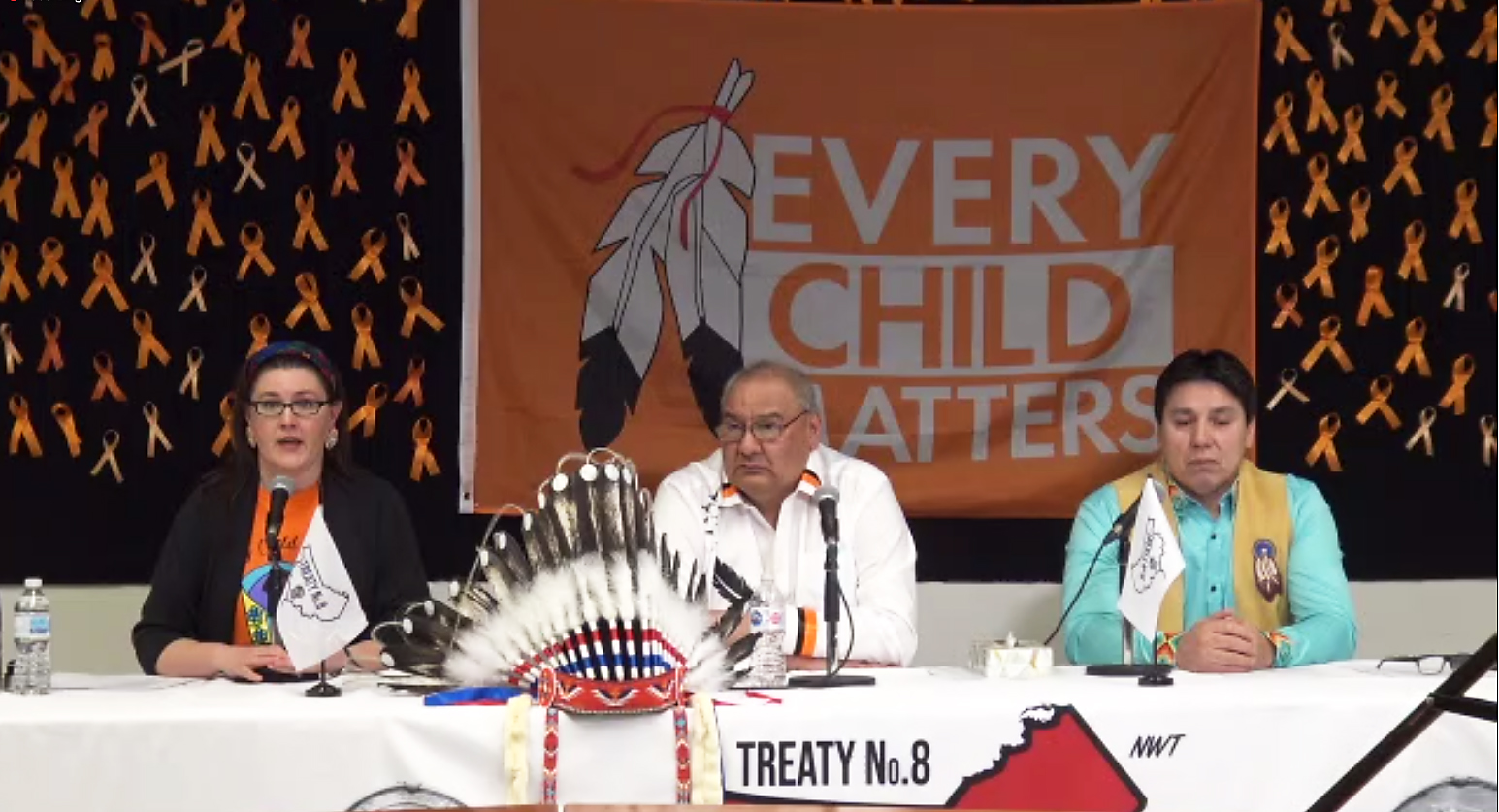 Dr. Kisha Supernant of the Institute of Prairie and Indigenous Archaeology at the University of Alberta, Kapawe’no First Nation Chief Sydney Halcrow and Treaty 8 Grand Chief Arthur Noskey at the press conference where the evidence of 169 unmarked graves at Grouard Mission was revealed.

Located about 370 kilometers northwest of Edmonton, the residential school was known as Grouard Mission or St. Bernard Mission School and was run by the Roman Catholic Church from 1894 to 1961.

The search used radar and specialized drones and was done by the Institute of Prairie and Indigenous Archaeology (IPIA) at the University of Alberta. The work which located the likely graves at the site of Grouard Mission is the first in a series of planned searches that began in August 2021. Only one acre was covered in this search, which focused on high priority areas including the community cemetery, the area around the church, the nun’s quarters and the area around the old root cellar.

Dr. Kisha Supernant, Director of the IPIA and her team, completed the first phase of ground-penetrating radar in October 2021. Ground-penetrating radar, which reveals the location of underground objects and structures, is a well-accepted method of archeological research that has been in broad use since the 1970s; a detailed explanation of the process used by the IPIA can found here.

“Every child matters. One grave is too many around a school,” said Supernant. “Each of these children was a beloved part of their family and no one has been held accountable for their deaths. The preliminary results of phase one indicate there is much more to do to find answers and to bring the children home.”

“This information is hard. It’s heavy. But our elders always have the integrity to speak the truth and now we’re seeing what’s been neglected all these years come to the surface,” said Treaty 8 Grand Chief Arthur Noskey.

According to Supernant, phase two will involve continued research looking into records, continued work speaking to survivors and gathering oral histories and further ground searches both at St. Bernard as well as St. Peter’s school which was run by the Anglican Church and is nearby.

This first report and the work done to build it was funded by Kapawe’no First Nation, according to Chief Halcrow, as funds that the provincial and federal governments had promised were slow to arrive. “We just got the provincial funds maybe a couple of weeks ago. The federal funds are still coming in the mail somewhere I think,” said Halcrow. “That’s the way they treat us. We could have waited but this report probably wouldn't have been done until next year.”