There’s very little public appetite for the sort of huge cuts and austerity that Kenney and the UCP were planning to inflict this year, and you can tell that the government was trying to be a bit more restrained than they were last year. But only a bit. Spending on health, education and social programs are for the most part not going up, and for every example of a program getting slightly better funding, there’s one on another page taking a hit. 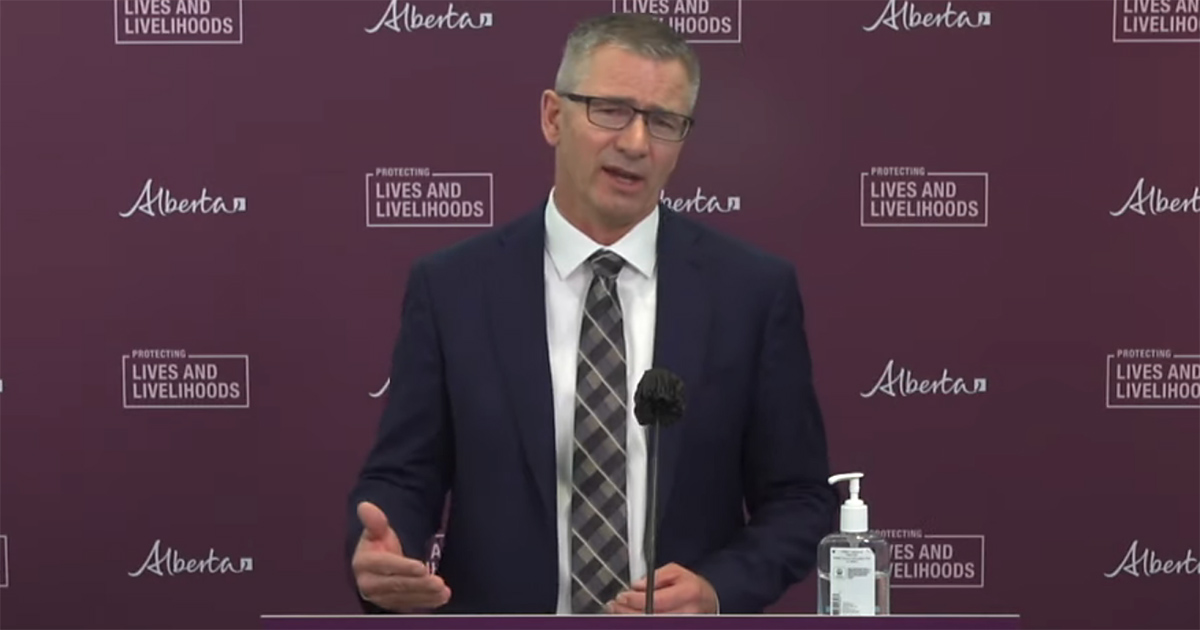 But while crucial services and programs keep getting squeezed, the UCP have managed to find room in the budget for all their partisan favorites—including the broadly loathed ‘war room’ the Canadian Energy Centre and a cynical campaign to drive up conservative voter engagement in the upcoming municipal elections with a sham referendum on equalization and a senate ‘election’ that is essentially a complete fiction.

And then there’s the matter of the more than a billion dollars blown by Kenney, after Joe Biden was elected, on a pipeline that President Biden vowed to cancel.

This provincial budget doesn’t just show us the UCP administration’s priorities—it will have real, material impacts on every person who lives in the province. The UCP know what they’d like you to focus on. But here are the top ten things we think you should know about Alberta’s 2021 budget.

Despite the pandemic, health funding isn’t really going up

You might expect that in the wake of a historic pandemic, one that nearly overwhelmed Alberta’s health care system and exposed some serious deficiencies at AHS, the government would make a significant investment to keep us from being blindsided ever again. But no: there will be a very modest 4% increase in 2021 and then the health care budget is essentially frozen for two years. When the next pandemic hits, we’re likely to be in the same situation we were in 2020.

Education is getting cut again, hard

Post-secondary education in Alberta has already been under heavy pressure, eating nearly $360 million in cuts in last year’s budget. The hacking-away continues this year with another $135 million squeezed out of  college and university budgets, which is sure to lead to more layoffs and even higher fees for students.

No plan for Alberta’s future

“Some suggest diversifying the economy requires a transition from our traditional sectors such as energy. Let me be clear, Mr. Speaker. That is not this government’s position.”

This brings to mind the famous bit of Canadian political bafflegab, “conscription if necessary but not necessarily conscription,” from William Lyon Mackenzie King.

It’s like an exasperated Toews is saying, we are diversifying, we think the future of the Albertan economy is both oil and gas and coal. But there’s no new plan here. It’s the same playbook from the Klein years—pray for rain. If tens of billions of foreign direct investment in our energy industry shows up, great, if not we’re screwed.

Kenney and Toews suggest that private enterprise, the profit motive and Alberta’s magic entrepreneurial spirit will magically solve our problems. They claim that if we lower corporate taxes and cut all our red tape and just do whatever the chambers of commerce and the CFIB want that corporations will just show up here and start spending money. That’s magical thinking, but it looks like it’s all we’ve got since Kenney’s dream of relocating Canada’s financial and industrial hub from Toronto to downtown Calgary and Edmonton doesn’t seem to be panning out.

The deficit is pretty big. But that’s okay

After the ‘surprise’ of COVID—a pandemic that had already been spreading Alberta before last year’s budget was even tabled—the provincial deficit for last year came in at nearly $13 billion more than expected. This year more realistic projections from the government predict a deficit of slightly over $18 billion. You’ll hear a lot over the next couple of weeks from the UCP and their allies arguing that this deficit justifies stiff cuts to government spending, but that’s an exaggeration.

The province still has decent credit, Alberta’s debt-to-GDP ratio (a measure of how much debt we are carrying versus the size of the provincial economy) is in line with other provinces, and borrowing costs are still quite low. The deficit isn’t ‘structural’, or permanent, either: noting that it was largely caused by the pandemic.This government is also refusing to raise revenue through new taxes or increased royalties so arguing about the deficit is a bit silly. You’re a government, if you don’t want deficits, raise revenue or make brutal cuts, the choice is yours.

Public sector workers are taking a billion dollar haircut. But no word on how

The government of Alberta expects to pay $1.07 billion less to workers who work in healthcare, education, post-secondary, directly for the government and in other government agencies from this year to the next.

How those savings are to be achieved is not explained. But the UCP government also expects to keep paying less to their workers the next year and the year after that.

That signals layoffs, privatization and possibly a pay cut for the nurses, lab workers, teachers, and hospital janitors and laundry workers who got us through this pandemic. Negotiations are ongoing between those public sector unions and the government at the moment.

While there are some management staff that the government can just impose pay cuts on it seems unlikely that workers who collectively bargain would agree to a massive pay cut given everything they’ve endured with COVID-19 and prior contracts with zero pay increases. That leaves one option for the government—ignore the bargaining process and legislate pay cuts.

The Keystone XL debacle was worse than we thought

Details about the KXL boondoggle are scarce in the budget, ironically because the government isn’t sure just how much of a loss the province is going to eat when all the dust has settled. A brief disclosure in the budget puts the current estimate of its loss around $1.28 billion.

One thing the budget documents do tell us is that most of these losses were avoidable. A big chunk of it was a loan guarantee provided to TC Energy on January 4, 2021, two months after Joe Biden—who promised to kill the pipeline immediately upon being elected—won the presidency. Handing TC Energy huge money in loan guarantees for a project that was quite clearly on its last legs can only be described as monstrously incompetent.

The $1.28 billion estimate in the budget doesn’t cover everything, either. Disassembling the partly-completed project and remediating the sites is going to cost a fortune, and not a cent of those costs are accounted for in the 2021 budget.

KXL wasn’t the only pipeline bungle: Alberta is eating a huge loss on crude-by-rail too

The former NDP government and present UCP administration really did a tag-team on Albertans bungling this file. Unable to secure more pipeline capacity, the NDP spent Albertans’ public money buying rail capacity to ship bitumen. It wasn’t a great deal in the first place—then the UCP made matters even worse by abruptly reversing course on it. Now losses are at $2.3 billion and still climbing.

Kenney lied to Albertans about these crude-by-rail contracts when he told us that the government had sold all of them early last year. But in November of 2020 the auditor general found that actually, the government still held 11 of those 19 contracts, and that Alberta’s liabilities came to $637 million dollars.

It didn’t help matters that Kenney spent months signalling to all potential buyers that the UCP were desperate to get Alberta out of the crude-by-rail business, handing all the leverage to potential buyers. As you can imagine, the buyers didn’t end up offering us much for them.

The war room is still getting money

The deeply-embarrassing Canadian Energy Centre will continue operations this year and is getting a budget of at least $10 million. We say at least because the CEC is also receiving an unspecified amount from the TIER (Technology, Innovation and Emissions Reduction) fund. The TIER fund is paid into by the oil and gas industry and the money is meant to fund research and development to reduce oilsands emissions, none of which the war room does.

A “flavour of the month” gets a $2 million a year

In May 2019 Jason Kenney told the Globe and Mail’s editorial board that investor concerns about climate risk were “a flavour of the month.”

It seems as if this flavour of the month is now a menu fixture as this budget revealed a $2 million dollar budget for a shadowy group called the ESG Secretariat. ESG in this case stands for environmental, social and governance and it’s an investment term that describes a process where investors screen companies and investments for things like… climate risk.

Toews described the work the secretariat does in spreading the good word about Alberta’s oil and gas industry as “critically important for Alberta.”

Wasn’t this what the war room was supposed to do?

This secretariat seems to be embedded within executive council (the premier’s office and cabinet) and has a $2 million dollar a year budget. That’s more than 5 per cent of the entire budget for executive council. If this issue could be addressed with a $2 million budget why are we spending so much money on the war room?

The overwhelming response from the public to the UCP’s ‘Fair Deal’ town hall tour was simply “keep your grubby hands off our pensions!” but that’s not going to stop Kenney from dumping $10 million of public funds into a cynical plan to drive up conservative voter engagement during this year’s municipal elections.

The Prime Minister and the federal government can and will completely ignore these non-binding measures. But that doesn’t mean they won’t accomplish anything: senate elections and equalization are both hot-button issues for conservative voters, and the UCP are banking on these additional ballot items driving them to the polls. The UCP will essentially be diverting $10 million in public funds out of the provincial budget to buy conservative voter engagement, and that’s more than just a waste of money. It’s corrupt.

There’s a lot to dislike in Alberta’s 2021 budget, from the grim cuts to our public services to handouts to private industry and corrupt diversions of public money to conservative partisan political projects. But there are some big things missing, too, and one that’s especially glaring is the lack of detail on funding coming from the federal government. Kenney and the UCP are incredibly hostile to Justin Trudeau and the federal Liberals but their financial support through programs like CERB and others has really helped people out. And every dollar sent to an Albertan by the federal government is financial help that Jason Kenney and his provincial government don’t have to worry about.

Will funding meant to support front-line workers be held back until the last minute, like the top-up money that every other province had distributed by last September but Alberta only got to this February? How much of the federal money that should be going to working Albertans instead be diverted to prop up the oil and gas industry?

These details will have to be teased out by the media in the days to come. While Alberta’s 2021 budget is long on rhetoric about the unfairness of federal transfers and the alleged need to slash the public service, it’s short on details—and even shorter on funding and support for the province’s critical public services.

Correction: We originally posted incorrect figures on the size of the post-secondary education and K-12 cuts. We regret the error.