In 2021, Edmonton’s police chief Dale McFee announced a new unconscious bias learning module in response to calls from the community to address brutal and racist policing. But academics are panning the program, describing it as near-useless and a distraction from reforms that might make a real difference.

The training program, an e-learning course about half an hour long called “Managing Unconscious Bias,” is currently mandatory for all EPS staff.

Temitope Oriola is a criminology professor at the University of Alberta and a frequent commentator on policing issues. He said the evidence of the effectiveness of this kind of training is “mixed at best and has little to no effect on the officers. It becomes another thing for them to check off.”

Oriola says that these short training sessions can only do so much and supports raising educational entry requirements for police officers as well as rigorous psychological testing and screening before hiring.

“That entry level is where the battle is won and lost,” said Oriola, who supports police officers having at least a bachelor’s degree in order to become sworn officers. Right now all you need is a high school diploma.

According to a page titled “Success Stories” on the Edmonton Police Service website the program “was developed to assist police in better understanding and interrupting the cycle of bias and its implications in law enforcement.” The e-learning module links to and encourages people to take the “Implicit Association Test” or IAT which is run by Project Implicit run out of Harvard. The EPS also uses materials and exercises from the “Implicit Association Test” in the course materials.

After running through some IAT exercises the course assures that regardless of your answers you are not prejudiced but that, “the IAT shows biases that are not necessarily endorsed and that may even be contradictory to what one consciously believes. So, no we would not say that such people are prejudiced.”

But according to research done by Ulrich Schimmack, a psychology professor at the University of Toronto Mississauga, these tests don’t actually do very much.

“[It’s] basically a roulette wheel that comes up with a random number,”said Schimmack to the University of Toronto News.

If you’re not an employee of the Edmonton Police Service but still want to take the “Managing Unconscious Bias” class you can pay $25, take it through the Canadian Police Knowledge Network, and get a nice PDF certificate with your name on it. 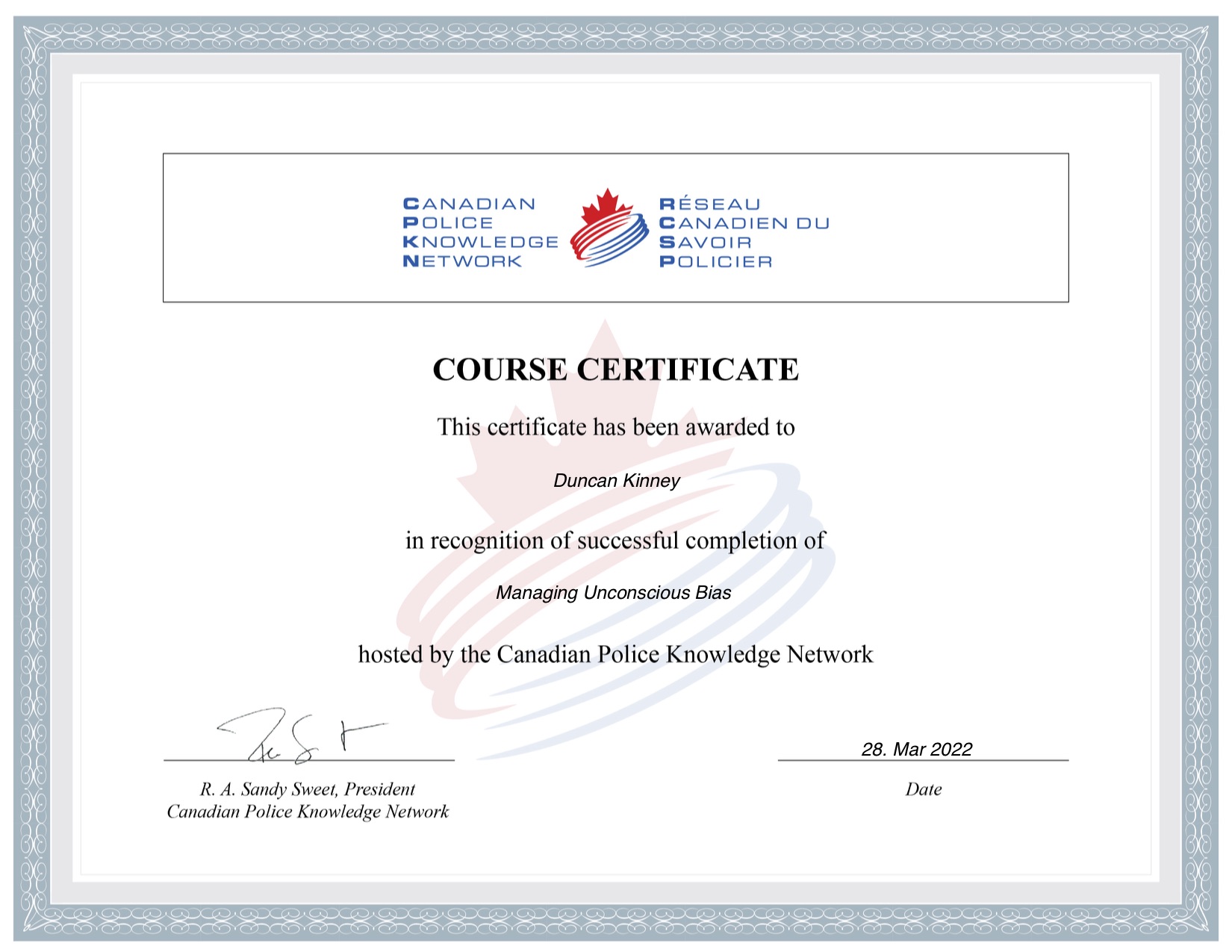 I was able to complete the course in two clicks but the Edmonton Police assure us that there are controls in place to make sure this doesn’t happen.

“The version of the Managing Unconscious Bias training module on the Canadian Police Knowledge Network (CPKN) is a modified version of the one EPS members must complete through the internal EPS Learning Management System. In the EPS internal version, completion credit is not granted until the user has gone through every slide in the course and completed all the activities, including scenarios, videos and other exercises, required to demonstrate comprehension. In their version of the course, CPKN removed these requirements,” said an EPS spokesperson.

According to a report submitted to the Edmonton Police Commission on the e-learning module the course takes about 20-30 minutes to complete.