A long-running police misconduct complaint against Const. Wayne Paesch concluded on Nov. 4, 2022 when he pleaded guilty to two counts of neglect of duty and one count of discreditable conduct under the Police Act. The fourth charge, unlawful or unnecessary exercise of authority, was dropped. Const. Paesch received a suspension without pay of 80 hours to be served in five hour increments per pay period. 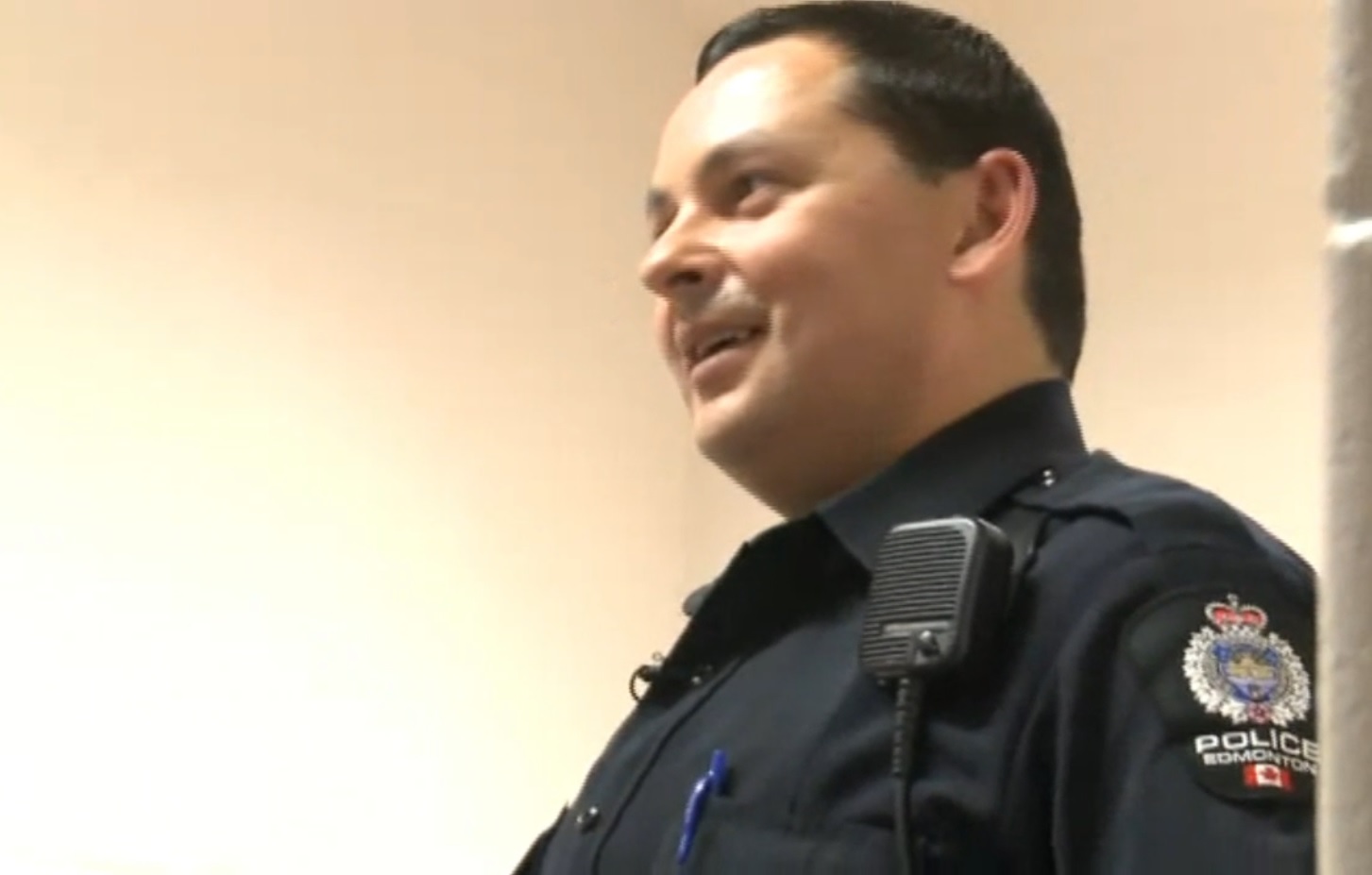 A screenshot of Const. Wayne Paesch from April 2013 after the arrest of Christopher Conlin.

The Police Act charges arose from an incident in April 2013 when Const. Paesch, as part of a short-lived Edmonton Police Services Youtube series called “The Squad,” arrested a Walmart loss prevention officer in his home.

In his complaint and a lawsuit filed in 2015 Christopher Conlin claims his arrest was played up for the benefit of the cameras.

“They raided my house like they were raiding a drug house,” said Conlin to the Edmonton Journal in March, 2019.

Police were told that Conlin had assaulted someone while arresting them at the Walmart he worked at. Officers also claimed that they suspected he was carrying a baton and what they described as an RCMP identification.

In a complaint filed with the EPS Conlin says he was “arrested in a dramatic fashion to ensure that The Squad video would be of sufficient entertainment value,” and that one police officer pointed an assault rifle both at Conlin and his common-law partner. Conlin’s three young children, aged two, five and eight were also home at the time.

Police seized a baton, a BB gun, an RCMP “promotional card”, a flashlight, tactical pouches, handcuffs and ear pieces from Conlin’s home after his arrest. Conlin was charged with impersonating a police officer, assault with a weapon and carrying a concealed weapon, but the charges were eventually dropped.

Conlin’s neighbors witnessed the arrest. Conlin and his partner used their residence as a daycare and after the arrest parents were reluctant to bring their children back. The complaint to the EPS alleges that this incident resulted in financial loss and a loss of reputation for Conlin.

Conlin filed a complaint with the chief of police (at the time, Rod Knecht) including 15 allegations against seven different officers. Knecht found that there was enough evidence to proceed with the four allegations against Const. Paesch: that Paesch used profane and unprofessional language during the arrest, failed to facilitate Conlin’s initial requests to contact a lawyer, and neglected to include “significant” information in his application to obtain a search warrant.

Due to complications with the Law Enforcement Review Board and the Alberta Court of Appeal the Edmonton Police Service’s internal investigation and disciplinary process took more than 8.5 years to complete. "Coming off a similar hearing where memories were tainted by the passage of time I'm willing to accept the 80 hour suspension without pay," said presiding officer Fred Kamins, a retired RCMP chief superintendent.

Unfortunately an agreed statement of facts was not provided to the media nor was it read aloud in Const. Paesch’s public disciplinary hearing. What he admitted to is unknown.

Complaints about the show led to the demise of “The Squad” web series after only two episodes. Journalist Mariam Ibrahim was able to get her hands on an internal memo about the cancellation and published it.

“With just two episodes we achieved our original goals of communication with the public, and generating interest in the EPS homepage and Youtube channel.”

The undated memo, signed by “Jeff,” says that the first episode of The Squad was the most watched EPS Youtube video of all time with over 16,000 views.

“But the success of The Squad also attracted the attention of certain individuals in the community who mistrust the EPS. They saw each episode of the Squad as an opportunity to challenge the Service with potential legal action” reads the memo.

Conlin has also filed a $1 million civil case against the Edmonton Police Service which is still ongoing.