The Downtown Recovery Coalition held a press event in downtown Edmonton Thursday to announce their priorities for “a safe and vibrant downtown.” The group’s immediate asks were for more police officers allocated downtown, better patrols and security enforcement at LRT station entrances and to repair and better maintain sidewalks, roads, benches, garbage cans and other important infrastructure.

“Our streets do feel safer when EPS is present,” said Chad Helm, the owner of The Helm, a menswear shop on 103 Street. He also shouted out two police officers by name who helped with a recent break-in.

Alexandra Hyrciw, the chair and spokesperson of the DRC, says that the organization has no plans to intervene in Edmonton’s upcoming police formula debate, which begins on Monday—notwithstanding Thursday’s presser, where the DRC’s speakers argued plainly for increased policing. The DRC was very vocal about their desire for increased policing in the run-up to Edmonton’s last council debate about police funding over the summer. 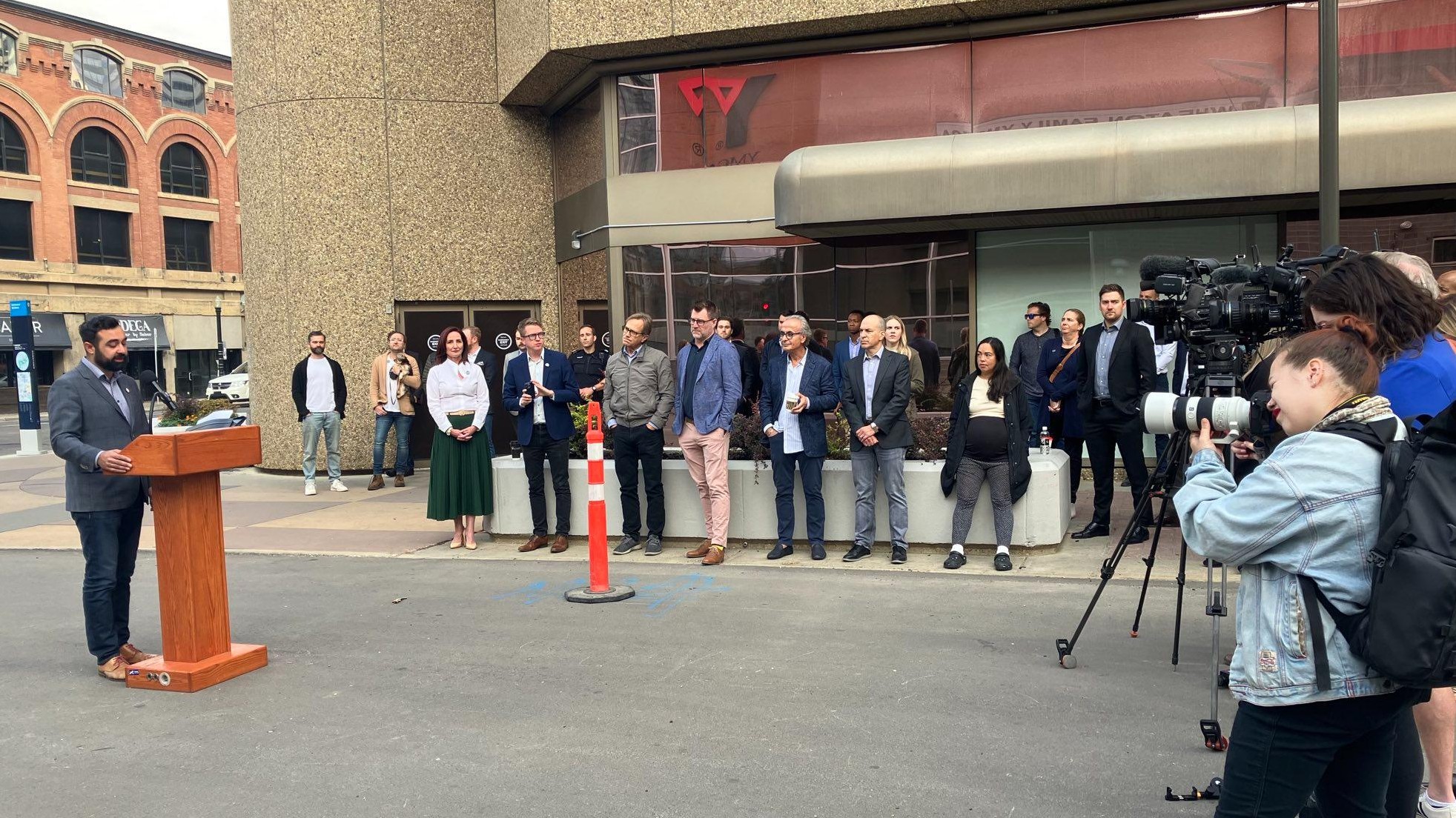 Anand Pye, the vice-chair of the Downtown Recovery Coalition, speaks at the DRC's press conference held Sept. 29, 2022 at 102 Ave and 103 Street outside of the old Bay building.

More long-term asks from the DRC include better crisis diversion response times as well as matters within provincial jurisdiction like more transitional housing and long-term recovery spaces. The city of Edmonton is still looking for $11 million from the province in order to operate eight supportive housing projects that are built, but vacant and unable to take tenants until the program is fully funded.

The Downtown Recovery Coalition are a mix of landlords, property developers, and business owners as well as non-governmental organizations like REACH Edmonton, the Chamber of Commerce and the Downtown Edmonton Community League. The chair is Hyrciw, the director of strategy and external affairs at the Edmonton Chamber of Commerce and the vice-chair is Anand Pye, the executive director of NAIOP, the commercial real estate development association and also the board president of Grindstone Theatre.

Kevin McKee, the CEO of Pangman Developments, was one of the speakers and he said if action wasn’t taken then Edmonton, “is very much at risk of losing trust in institutional investors.”

Key messages for this press conference were shared in advance with a who’s who of bigtime Edmonton property developers like Cameron Naqvi and Tina Naqvi-Rota of Cameron Development, the company that developed South Edmonton Common. Tim Melton of Melcor Developments, one of the infamous five guys who inadvertently helped elect the NDP in 2015, got the key messages in advance, as did Brad Gilewich, the president of Katz Group, the owners of the Edmonton Oilers and the developer of many properties in the “Ice District.”