Jason Kenney’s brother, who ran a youth recovery centre shut down by B.C. government, likely living and working in Alberta

Earlier this month Premier Jason Kenney told the Calgary Chamber of Commerce an anecdote he heard from a suburban developer that a hundred families a week are moving from Toronto to Calgary. The reason why he believes it? “I know because my brother is one of them, just showed up in his U-Haul, last night.”

And while the Premier didn’t specify which brother - David or Martin Kenney - David is the far more likely candidate to have come to Alberta. David’s recovery centre business in Ontario closed down in April 2020 when COVID started, while his other brother Martin, runs a successful tax-fraud oriented legal practice in the British Virgin Islands. And usually when the largely unknown sibling of a high profile politician moves to a new province it’s not news, but David Kenney and his wife, Susan, are not your usual run-of-the-mill recovery centre operators.

David and Susan made headlines in 2013 after their unlicensed youth residential treatment program in Kelowna, B.C., NeurVana Innovative Recovery and Wellness, was shut down by the Interior Health Authority (IHA).

The facility was investigated after three youths ran away and asked a neighbour for help. After being shut down, David and Susan were sued by three families claiming their kids were emotionally abused, bullied, and denied their prescription medications by David, Susan, and other NeurVana staff. However, the lawsuit was later dismissed after both sides agreed to discontinue legal action.

In late 2015, David filed a petition in the Supreme Court of B.C., arguing that the investigation of NeurVana was unlawful and out of IHA’s jurisdiction. Supreme Court Justice Anthony Saunders disagreed, and dismissed the petition in early 2017. 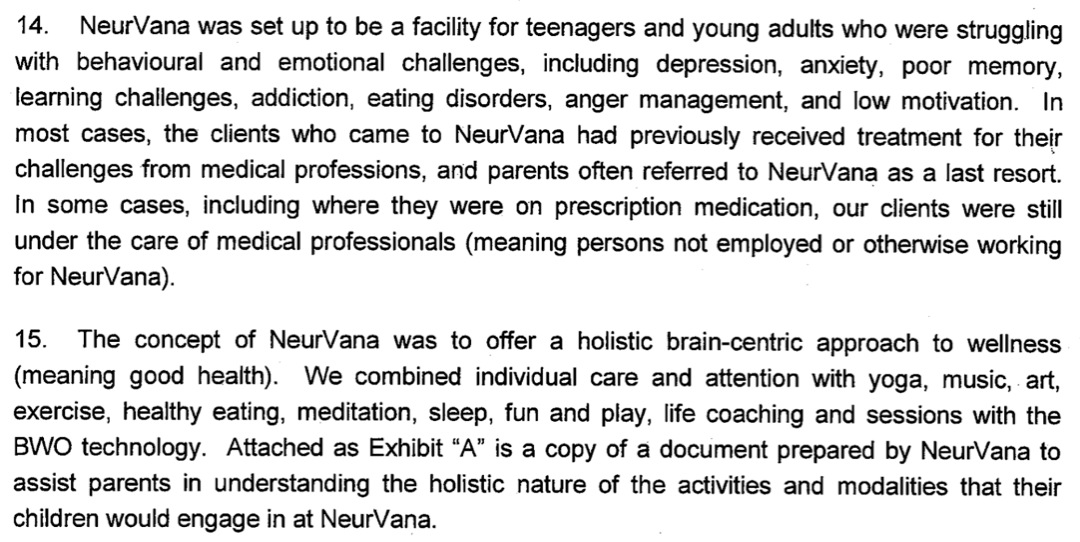 Screen capture of the affidavit David submitted with the petition. Here he states what the facility was supposed to help youth recover from, and what treatments or “modalities” were offered.

“NeurVana did not offer or provide medical or psychiatric treatments,” David Kenney states in his affidavit.

The petition, however, offered a look into how the Kenneys ran NeurVana, or “The Ranch,” as David called it. Justice Saunders included some of the complaints gathered by the IHA with people who had gone through NeurVana’s recovery program.

“When the youths were allowed telephone contact with their families, the calls were not made inside the Ranch, but rather, were made from inside Mr. Kenney’s vehicle on a cell phone, on speaker, with Mr. Kenney in attendance. They were warned in advance not to talk negatively about the facility, and not to complain, or say they wanted to leave treatment; if they violated any of those conditions Mr. Kenney would simply hang up, terminating the call;

“One young girl said that she had been on a number of prescription medications, including antidepressants and anxiety medications, when she arrived at Neurvana. During her admission, Mr. Kenney had confiscated the prescription medications and locked them away, forcing her into what was effectively a ‘cold turkey’ withdrawal. After a period of time without her medications, she wasn’t managing well, and she had a panic attack. Although she was aware that others were not allowed to talk to staff members about personal matters, she was trying to calm herself by talking to one of the chefs in the kitchen. Mrs. Kenney came along and, as punishment for her transgression, yelled at the girl, forced her to go outside, and locked the door. It was November and very cold outside, and she had no shoes or coat. She asked to be allowed back inside the residence, but Mrs. Kenney refused to let her back inside. When the girl became more panicked and upset, Mrs. Kenney told her that she would not be allowed to come back in until she was ‘safe’ for all of the other residents, that she would have to stay out there until she calmed herself down.”

Deb Watson, who’s then 14 year-old son, Nicholas, spent five weeks at NeurVana in early 2013, was led to believe that the Kenneys did offer psychiatric treatment. “It seemed to coordinate with the brain science they were touting as the latest therapy,” Watson said, referencing “brainwave optimization technology.”

“I think we just assumed if we were paying $5000 a week that they were some great facility.”

Watson was told by Nicholas’ probation officer that she should send him to a youth treatment centre after he started getting into trouble. “I can’t explain to you the absolute panic you go into and the desperation of just trying to find something you think is gonna help,” Watson said.

Nearly 10 years after going to NeurVana, Nicholas “has a hard time talking about it,” Watson explained. “He absolutely hated it.”

After moving to Ontario, David and Susan opened a new business, Emergo Recovery, in late 2016. The facility, which closed in April of 2020, was similar to the NeurVana program, except the Kenneys began working with adults. 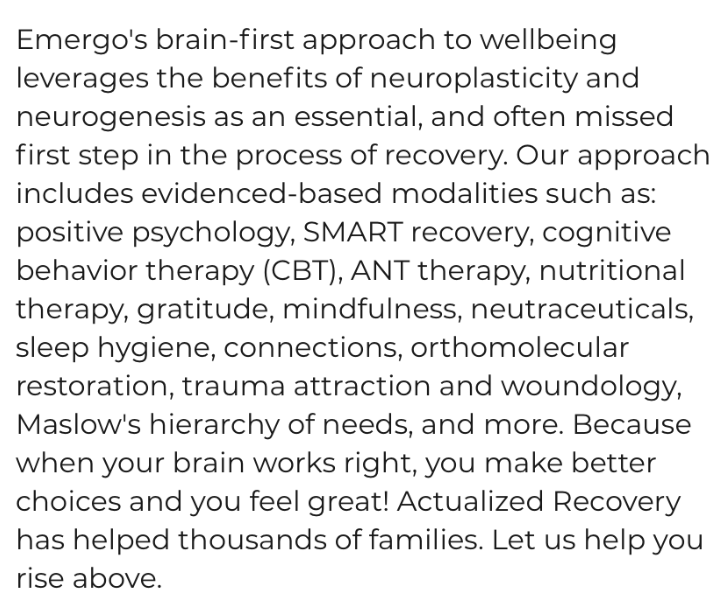 The treatment David and Susan claimed to have offered at the facility in Ontario. Screen capture from the Emergo Recovery website.

Marcel Monette, an addictions counsellor formerly with the Addiction Recovery and Community Health (ARCH) team at the Royal Alexandra Hospital, says parts of the Kenneys’ approach come from well-founded ideas and theories, such as positive psychology, ANT (automatic negative thought) therapy, and woundology, but “we kind of get into the stranger pseudosciences with the nutritional therapy and the neutraceuticals.”

Orthomolecular medicine, which Emergo Recovery claimed it specialized in in this 2019 release, was founded by Linus Pauling and centres around taking supplements to maintain health. Many of Pauling’s claims have been disproven since his death in 1994, including the idea that ingesting large amounts of vitamin C can help us recover quickly from the common cold, or even stop people from getting it. That same release from June 2019 also announced that Dave Kenney was certified as “Brain Health Coach by Amen Clinics.”

After Emergo Recovery closed, David states he became a PhD candidate “focusing on neuroscience and psychology,” at Canterbury Christ Church University, and Susan enrolled in the Kresser Institute, a business owned by Chris Kresser that advocates functional medicine and ancestral health.

David and Susan Kenney’s possible arrival in Alberta comes as the government of Alberta has reduced access to harm reduction services and supervised consumption sites while continually touting recovery as the best way to deal with the opioid poisoning crisis. This focus on recovery by the provincial government has not stopped Alberta from setting a new record for deaths from opioid poisoning in 2021. 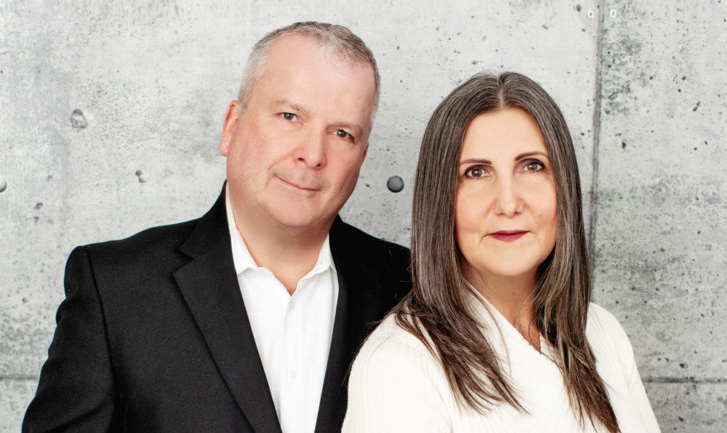 The provincial government has also stalled the proclamation of the proposed College of Counselling Therapy of Alberta (CCTA). The CCTA, if proclaimed, would regulate counselling therapists and addictions counsellors in Alberta by granting practice permits only to those who meet certain standards.

“Regulation and proclaiming the college to kind of create at least a basic standard will be hugely helpful,” Monette said. “It’s important to create a cohesive and consistent product.”

After closing Emergo Recovery, the Kenneys rebranded for the third time. The new business, called Emergo Wellbeing, contains inaccuracies on their “Our Story” page.

The Kenneys have also expanded their operations with Emergo Wellbeing. They now offer virtual programs, resort retreats, a non-residential day program at a “private countryside property,” and more.

As part of the day program, Emergo Wellbeing provides “Brain Echo sessions.” Brain Echo is simply the new name for brainwave optimization. The developer of Brain Echo, Lee Gerdes, says the technology is “not intended to treat, cure, heal, or diagnose any disease, mental illness or symptom, they are intended only to facilitate balanced neuromodulation.”

“Our mission was born from a single question: ‘Can we fix a brain?’,” Emergo Wellbeing states online.

David and Susan Kenney did not respond to multiple requests for comment. 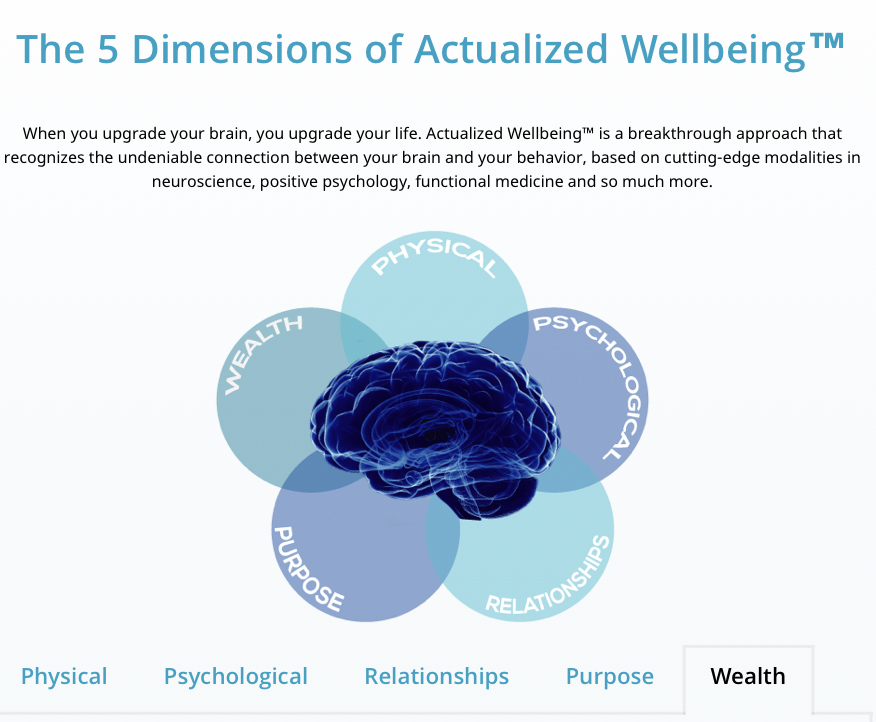