The Progress Report has obtained more details on the $4 million sole-source contract for a “unique partnership opportunity” given to the NHL by the Alberta government during the Edmonton playoff bubble.

A spokesperson for Communications and Public Engagement (CPE), the department of the Alberta government which handles public relations and marketing, provided us with a summary of what the $4 million bought: ads in empty NHL arenas that were briefly picked up by television broadcasts, outdoor advertisements promoting Alberta that were run in the Ice District in downtown Edmonton and a handful of other NHL controlled locations, scripted mentions of Alberta by broadcast announcers, Alberta imagery used as the backdrop while the national anthems were being sung for certain games, and Alberta promotions on NHL social media channels.

Matt Wolf, executive director of issues management for the Premier, had claimed on Twitter that the $4 million included broadcast advertising. That appears to be false.

“These games were broadcast by NBC, NBCSN, [Sportsnet] and CNBC. Alberta imagery was the backdrop for national anthems during three games that included a conference final and two Stanley Cup final games,” said David Sands of the CPE in his reply to our inquiry.  Few viewers were watching to see them. The 2020 Stanley Cup finals carried the lowest average ratings of any NHL finals since NBC gained the rights to US broadcast. The Canadian ratings were also described by Simon Houpt of the Globe and Mail as the worst in recent memory.

Just a couple of weeks after the NHL bubble wrapped up Jason Kenney was claiming that Alberta was ‘broke.’ While the NHL playoff bubble was unfolding Kenney wasn’t giving our healthcare system and healthcare workers the resources they needed to prepare for the second wave of COVID-19 Instead we got ads promoting Alberta that ran in downtown Edmonton. Did this provide an adequate return to justify a $4 million price tag?

“I would say no,” said Najib Jutt, a political branding consultant and partner at Statecraft Partners. who has done work with brands such as Cadbury and Uncle Ben’s. “We had [the playoffs] in Edmonton anyways... you were going to get that exposure and Alberta mentioned over and over again in the coverage regardless.”

Why would the government of Alberta do this? “My guess would be that the $4 million spend was tied to the deal of having it hosted in Edmonton in the first place,” said Jutt. “That’s how these things work. They made a pitch and that was part of the pitch I would think…if we pick Edmonton as the host, you will spend $4 million on advertising… That’s business as usual for these things. There is a quid pro quo involved.”

The $4 million paid to the NHL is double the price the City of Edmonton pays to the Oilers for their branding partnership, and that partnership covers the length of an entire 82-game NHL  regular season (and whenever they make the playoffs). The NHL bubble ran concurrently in Edmonton and Toronto for two months.

We looked into the social media advertisements mentioned by Sands as part of the contract and found nominal mentions on the NHL Twitter, Instagram and Facebook accounts, with the most prominent Alberta-specific content being Edmonton’s incidental backgrounding in a 45-minute “Inside the Bubble” documentary and multiple Instagram posts involving shirtless hockey players fooling around at Commonwealth Stadium.

Sands also mentioned virtual community visits and town halls by “prominent” NHL players like Deryk Engelland, Taylor Fedun and Justin Dowling, a fairly common part of what the Edmonton Oilers Community Foundation already does across Alberta. Fewer than 3000 viewers have watched these videos on YouTube. 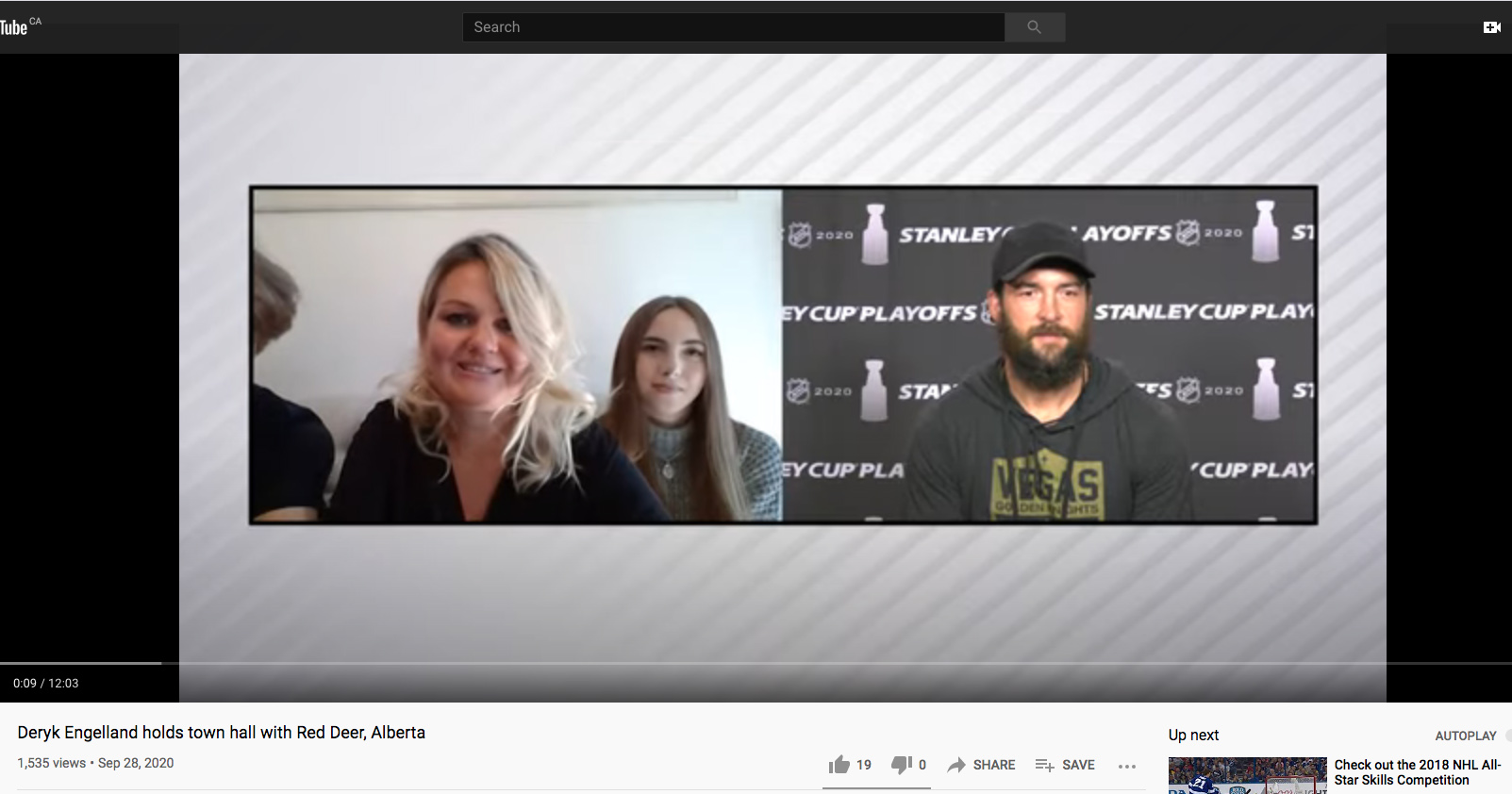 A screenshot from Deryk Engelland's town hall with Red Deer, Alberta. This event was "made possible with the help of the Government of Alberta."

Jutt highlighted the importance of framing advertising in relative terms when looking at major sporting events, “When you’re spending $6 million on a 30 second Super Bowl ad those ads are some of the best that the advertising world have ever created. And that is the big return for the brand, they create these amazing ads just for the Super Bowl and the association with the brand is worth it in the end.”

“From what I saw what we were advertising during the NHL playoffs, I wouldn’t put it in that category.” 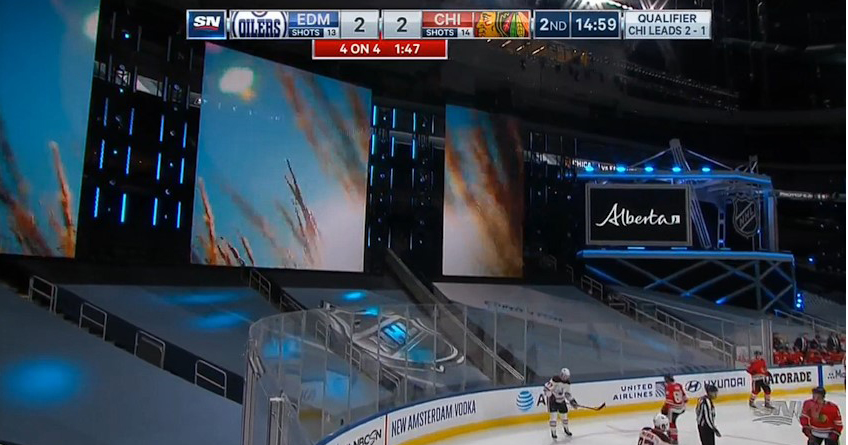 A screenshot from an NHL game in Rogers Place that shows the kind of advertising the government of Alberta procured from the NHL for $4 million.

Perhaps if this ad buy had gone through the government’s usual procurement process, someone might have objected to the deal. But it did not. The Alberta government cited a rarely-used exemption to order to justify it as a sole-source contract. None of the government’s numerous announcements or press releases promoting Edmonton as a host city mentioned the advertising deal. Our researchers came across the contract by happenstance--only noticing the strange line item while investigating sole-source contracts to conservative-connected law firms.

When describing the nature of the spend, David Sands said, “If you watched any of the NHL playoffs, you probably saw our part of it,” but did not address whether or not “our part of it” in retrospect, was worth the hefty price tag.

It’s difficult to measure the effectiveness or ineffectiveness of any ad campaign, but we find it vastly unlikely that residents of downtown Edmonton were unaware of Alberta or needed to have it advertised to them. One thing is certain, as the province struggles with the worst coronavirus rates in the country, with our hospitals on the verge of being completely overwhelmed, we can think of significantly more important things to fund than hockey ads. 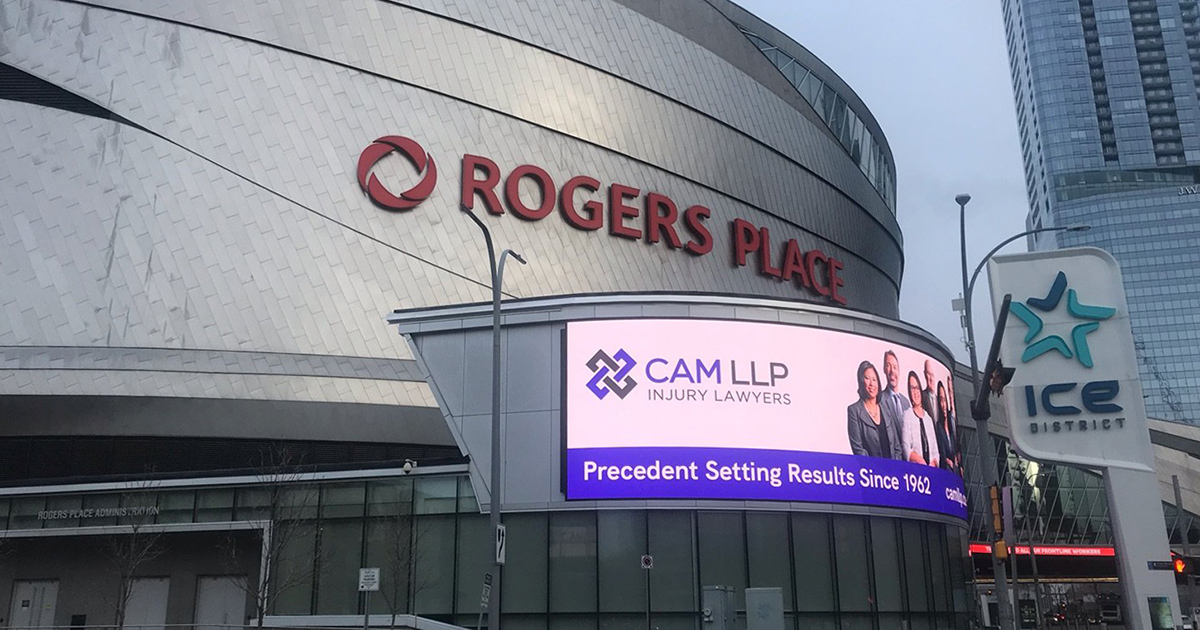 This digital billboard outside of Rogers Place in downtown Edmonton would have been showing ads about Alberta during the NHL bubble.