Drug checking saves lives and changes the narrative around the drug poisoning crisis. So when will it come to Alberta?

The terrible surge in fatalities among people who use drugs in the last decade is called a drug poisoning crisis for a reason: the iron law of prohibition means more concentrated, more dangerous drugs keep making their way into the drug supply with tragic results. 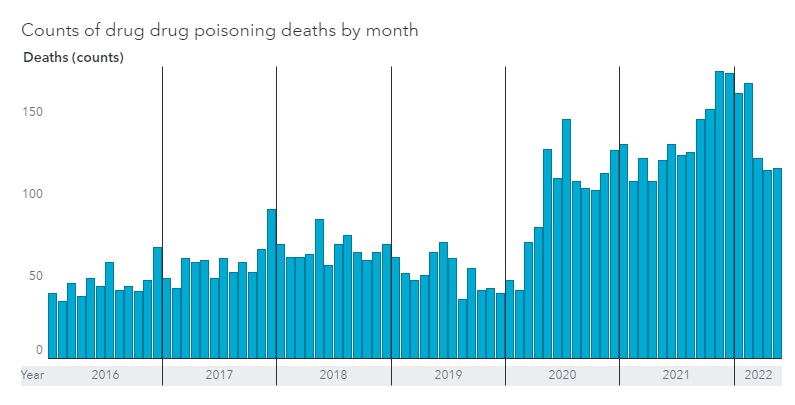 Graph of drug poisoning deaths in Alberta since 2016. Screenshot via the Alberta Substance Use Surveillance System.

Catching these batches of poisoned drugs, and alerting people before they take them, seems like an obvious way to save lives. And while the government sits on its hands independent organizations are stepping in to do the work.

The organization doing the most drug checking in the world is in Vancouver, B.C. It’s called Get Your Drugs Tested and it’s funded by the profits of a medical cannabis dispensary. It’s completely free, you can drop off your drug samples or mail them in and the site is stocked with harm reduction supplies.

Back in February the founder of this service, Dana Larsen, wrote a piece talking about what he had learned from testing 23,000 drug samples over the past few years. We are far removed from the days when the problem was that heroin, or cocaine or methamphetamine might be occasionally cut with the dangerous opioid fentanyl (though that still happens). Now the primary street opioid simply is fentanyl, and even that is being adulterated with benzodiazepines.

Benzos make the street supply even more dangerous than fentanyl alone: naloxone, the single best treatment for opioid overdoses, doesn’t effectively counteract the effects of overdoses when benzodiazepines are present. And if you accidentally develop a dependency on benzos, you’re in a lot of trouble. Benzodiazepine withdrawal can cause seizures, mental disorders, or even be fatal, and some people develop protracted withdrawal syndrome that can last months to years.

Thankfully there is an organization trying to bring drug checking to Alberta. The Alberta Alliance Who Educate and Advocate Responsibly or AAWEAR is working on a mobile drug checking pilot in Calgary that would operate out of a van. They’re currently going through the paperwork necessary for the project but they’ve lined up the necessary federal funding and expect to get it up and running sometime in 2023.

Kathleen Larose, the executive director of AAWEAR, expects this project to make a difference but says, “decriminalization would make drug checking so much more easy. Getting the exemption is like pulling teeth.”

“An exemption could take upwards of a year, and in a year how many people are going to die because they don’t know what’s in their drugs?”

The city of Calgary is not currently in the process of decriminalizing small amounts of drugs as Vancouver and B.C. have done and as Toronto has requested. But the mayor of Edmonton, Amarjeet Sohi, has requested that the city administration prepare a report and recommendations on decriminalization for the first quarter of 2023.

That wait would be too long, argues Edmonton councillor Erin Rutherford. She believes drug checking can make a difference in the drug poisoning crisis right now and she wanted a report back from city civil servants on their options on drug checking by September.

“It has the potential to save lives. And if it saves lives we should do it,” says Rutherford.

When we spoke to Larose of AAWEAR no one from the city of Edmonton had yet reached to them to ask them about their project.

“That is concerning, especially considering when it’s due back. I would have expected them to talk to the one and only pilot program in Alberta,” said Rutherford.

So where is the province on all of this? Back in April when Rutherford’s motion was approved Postmedia reporter Lauren Boothby asked the province about drug checking.

A spokesperson from mental health and addictions associate minister Mike Ellis’ office said that there is “no evidence that drug checking would have any impact on the rate of opioid-related fatalities,” and sent Postmedia a literature review co-authored by Simon Fraser University researchers in 2021.

According to Postmedia, while this review did find a gap in the research on whether or not drug checks reduce deaths, it also referenced a 2018 Vancouver study where people who found fentanyl in a drug check were more likely to plan to reduce their doses. Those researchers found that reducing your dose significantly lowers the odds of an overdose.

And the UCP government’s response ignores a meta-study published in 2021 that looked at 90 different studies on drug checking. The peer reviewed paper, published in Addiction, the premier journal on addiction studies, found that “drug checking services appear to influence behavioural intentions and the behaviour of people who use drugs, particularly when results from drug checking services are unexpected or drugs of concern.”

But the UCP demonizing drug users and ignoring effective interventions that actually help people isn’t new. Back when the federal government granted the province of B.C.’s request for drug decriminalization, Jason Kenney denounced it in an incoherent statement that included a graphic of needles at a playground.

Elaine Hyshka, an associate professor of public health at the University of Alberta and a Canada Research Chair in health systems innovation, would like to see more drug checking.

“Drug checking helps healthcare providers know more about what is in circulation which informs everything from medical protocols to prevention programs. Without drug checking we’re flying blind on a day to day basis on what’s in circulation… When you’re dealing with a public health emergency and trying to prevent death, why wouldn’t you want to know what’s in the drug supply?”

According to Hyshka, drug checking also offers another way for people who want treatment to be referred and when those people end up in treatment doctors can actually know what they were using.

“Honestly, it’s baffling that the government doesn’t fund drug checking. It’s not a panacea but it’s a useful tool and we don’t have that many of those. We need to use it.”

Drug checking done on a wide scale would lay bare the realities of the health crisis we face. It’s not an opioid crisis, it's a drug poisoning crisis. And if we knew what kind of poison drugs we were dealing with on a daily basis less people would die.

But one of the reasons why the UCP are against drug checking and why the Alberta Association of Police Chiefs is against something that would make drug checking easier in decriminalization is because of the narrative power that drug checking would provide.

It’s far easier to blame the people who use drugs or the evil molecule they’ve decided to put in their body. But people use opioids all the time. My partner was offered fentanyl when she was giving birth. And while the fentanyl that you find in a hospital is far different than what’s available on the street it doesn’t have to be.

Legalizing and regulating criminalized drugs is the only way to stop the death. Drug checking would make that solution even more clear. 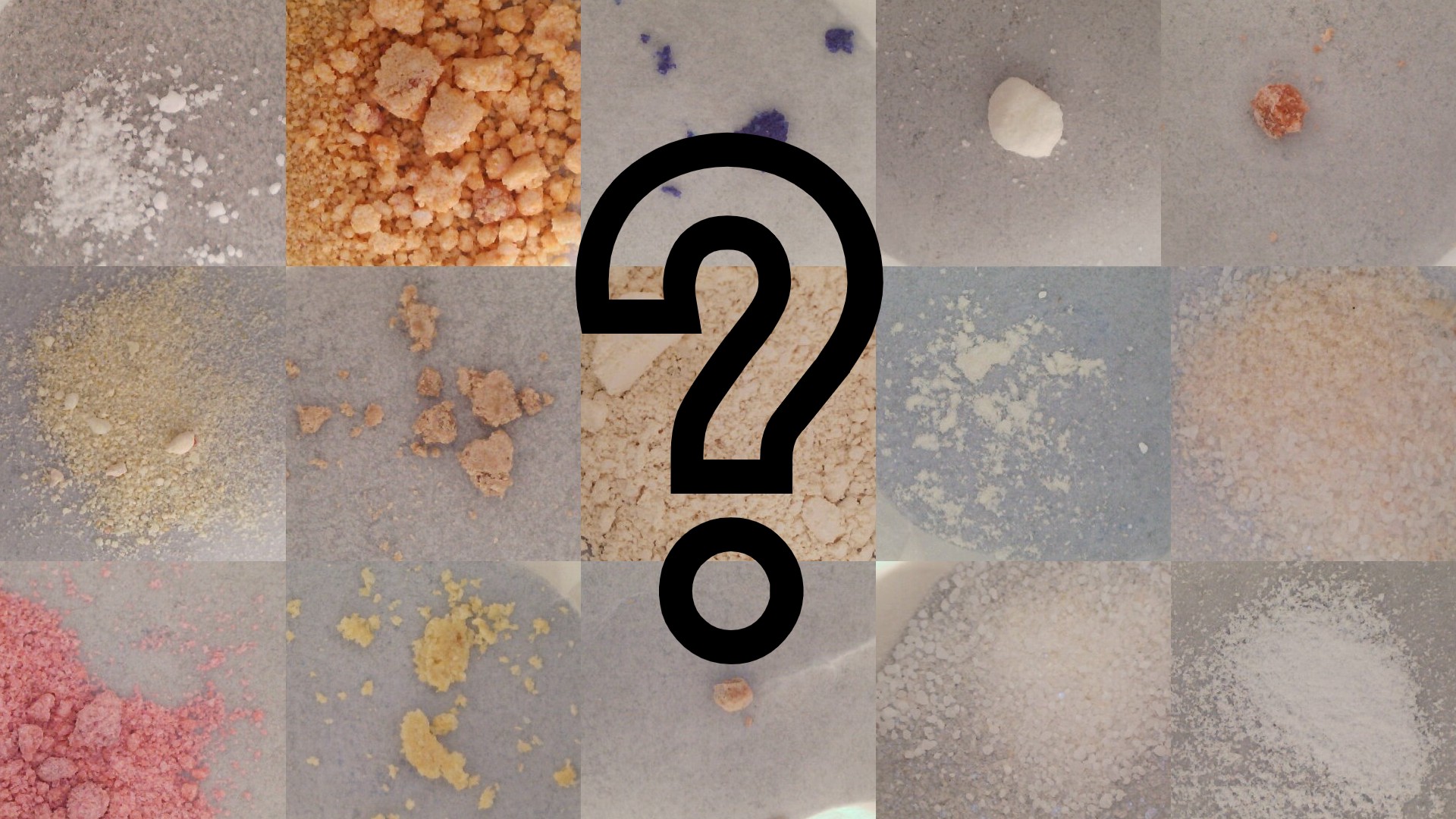 All images come from the Get Your Drugs Tested alerts page.