A word to Edmonton’s city council: Don’t waste your time trying to appease Tyler Shandro and the police lobby or you’ll never get out of this mess

Mayor Sohi, and the members of Edmonton city council: even a crank like me feels a bit of sympathy for you, stuck in a trap laid by former city councils and the provincial government. While the city struggles with growing homelessness and a horrific drug crisis, right-wing blowhards and the powerful police lobby are trying to pin every crime in the city on you for budget cuts that you haven’t even made.

To now see Tyler Shandro, a cabinet minister in the UCP government that hacked away not just funding for crucial social services, but even the police department itself, wade in and run his mouth off gets me almost as angry as I have to imagine it makes you. 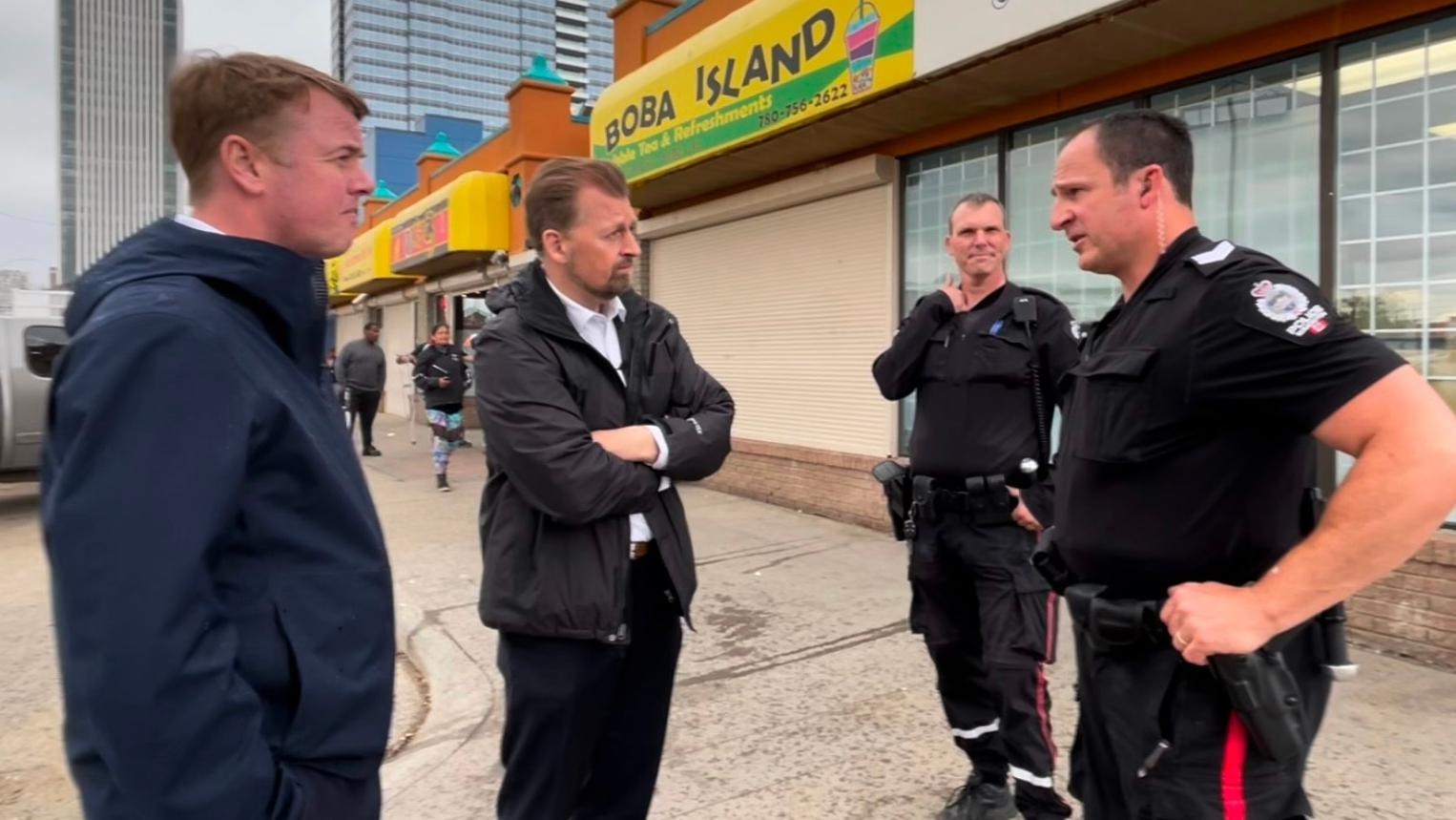 If you’re not feeling inclined to bow to the lobbyists and loudmouths who have been clogging up your desks and phone lines with misinformation, fear-mongering and baseless smears: good. Because the path of least resistance—appeasing these people—is not going to get you anywhere.

For those in the audience: Shandro invoked the Police Act today, making a big show of his demand that the city immediately develop, in the span of two weeks, a plan to address what Shandro calls a “violent crime wave” in downtown Edmonton. It’s the latest salvo fired in a pitched battle over the past two weeks instigated by Chief Dale McFee and the Edmonton Police Association in order to preserve guaranteed budget increases that were put in place by a former city council.

Back in 2016, the council of the day pegged EPS’s budget to a formula, which guaranteed increases every year, no matter what. The rationalization, at the time, was that this would ‘de-politicize’ policing by keeping council at arm’s length—a word that sounds like a good idea, if you don’t think too hard about it.

Today’s council is finding that a police service that doesn’t answer to the democratically elected local government isn’t actually all that great, especially when that government has to make careful decisions about allocating a finite bucket of public funding. Unlike other levels of government, Alberta’s municipalities aren’t allowed to take on significant amounts of debt. And the one lever they can pull for more revenue—property taxes—provokes heavy public opposition. So the councilors are in the unpleasant position of playing a zero-sum game.

So too were their predecessors, and while the ultimate cause of Edmonton’s rising social disorder may be austerity from higher levels of government, the direct responsibility for today’s crisis lies with the city’s previous administrations.

There is a crisis. Let’s not dither about that. Edmonton’s Chief of Police, Dale McFee, is incorrect (or even untruthful) in the media frequently, but when he invoked the word last week, he wasn’t wrong. In fact there are several crises, overlapping and worsening each other, and surely everyone in Edmonton knows it. “A downtown crime wave” is not actually one of them.

When so many people were without homes, and when shelters in the city proved so inadequate to help them that hundreds of people set up a tent encampment in Rossdale in the summer of 2020, that too was an obvious sign of crisis. And those shelter issues have still not been solved.

When so many people were unsheltered and in danger of dying outdoors in the cold that the city had to let people shelter in train stations, that too was an obvious sign of crisis. And not only, again, has the inadequacy of the shelter system not been addressed, but many of those folks are still sheltering in the LRT, despite the transit system very obviously not being designed or intended as a shelter.

Today the narrative about these crises is that “Edmonton is dangerous” or that “Edmonton has a crime problem,” despite actual crime statistics showing otherwise. And the narrative about police funding is that Edmonton has been ‘cutting’ its police budgets, which has led to these social problems, despite Edmonton having not in fact cut its police budgets at all. The misleading line about budget cuts, advanced by the Edmonton Police Association and a handful of conservative-aligned political meddlers, is bent into a simplistic solution: too much crime, so add more police.

Councilors, and Mayor Sohi: I know you will be under exceptional pressure to bow to that line of reasoning when you make the call on Edmonton’s police funding formula on Friday. But if you do, you’ll be screwing yourselves, your successors, and the city at large in exactly the same way your predecessors and the provincial government screwed you.

I urge councilors to look past simplistic narratives, identify the true crises, and focus on actual solutions to those actual problems.

There are many people struggling with houselessness and poverty who are using the transit system for shelter. Regardless of the fact that these people are not dangerous, and that the discomfort of well-off people who encounter them is founded largely in prejudice, it is still unacceptable and unsustainable that folks are having to take shelter in a train station or on a bus. Everyone would be happier if they had somewhere else to go.

There are people who are using some pretty strong substances in public, and regardless of the fact that many people maintain irrational fear and prejudice against people who use drugs, it is still undesirable and unsafe for people to have to use in these spaces, instead of in the privacy of their own home or the safety of a supervised consumption site. Everyone would be happier if those folks had somewhere else to use.

There is a great deal of friction between folks who don’t normally encounter people in crisis, and the growing number of struggling city residents who are forced out onto the street for lack of shelter and resources. Everyone would be happier if those Edmontonians had somewhere to live, and someone to help them.

These are specific, actionable problems. They are not “crime in Edmonton is out of control.” Councilors may be getting a lashing from a public that complains about “crime in Edmonton,” but most of today’s discontent really boils down to these three issues.

Council could bow to the request of the police lobby, reverse the proposed funding changes, and throw the police whatever sack of money they’d like, and still not solve these underlying issues. Even worse: this approach would starve the city budget of funding that it actually could use to build housing, fund social work, and get people off the street. Appeasement was the approach that the former administrations took, and I understand why; when a loud section of the public (backed by popular politicians and a powerful lobby) argues “too much crime, therefore add more cops,” and demands exactly that, the path of least resistance is to just to give them what they demand. But that path just leads you right back to where we are today.

Think harder. Be bolder. Aim higher than just getting people off your back for a month or two. That’s my advice for council today, if you don’t want to be in exactly the same crosshairs six months from now, and six months from then, and so on endlessly.

Certainly council must know that no matter what they do today, the chief of police and the Edmonton Police Association will run another belligerent fear campaign to squeeze them every single time the police budget is in the spotlight. But if the city takes real, significant steps today to provide housing and help, it can do what councils of the past failed to do and actually take a bite out of these underlying problems, and that will ease the concerns and friction that are out there. The police lobby cannot be satisfied, but if council gets folks off the streets and into homes, you can satisfy the public.

But I have to end on a somber note. Edmonton’s new city council has shown some restraint on the police budget, but hasn’t cut it. The measures necessary to resolve Edmonton’s festering poverty problem are not free. It seems clear that, at least for now, this council does not have the will to hack $80 million or so out of the police budget.

Whether the money gets milked out of the bloated police budget or scraped out of other, much smaller buckets of city spending, Edmonton must dramatically change course, and not next year, or when a new provincial government maybe shows up, but right now. This summer. Now. City council will have no peace as long as thousands of people in crisis are out on the street, and if this council waits much longer to take responsibility, soon they’ll have only themselves to blame.

Jim Storrie is a writer and editor with The Progress Report who lives and works in downtown Edmonton. The opinions expressed in this editorial do, in fact, reflect the views of his employer.