On November 27, 2021 at the Fairmont Chateau Lake Louise, crown corporation Invest Alberta hosted an invite-only meeting of the Calgary Airport Banff Rail Working Group where the project proponents, one of them a former Invest Alberta board member, made their pitch for why the government of Alberta should give them $30 a million a year for the next 50 years.

Several confidential sources have confirmed to the Progress Report the existence of the sponsorship which went hand in hand with not only the invite-only meeting, but also an open-bar VIP dinner featuring truffle oil and prime rib that was attended by Premier Jason Kenney and multiple cabinet ministers. Invest Alberta also had a tent in the VIP area near the finish line of the ski races with alcohol and food. Invest Alberta executives, staffers, board members, VIPs, politicians and guests were hosted at the Fairmont Chateau Lake Louise and the Post Hotel. 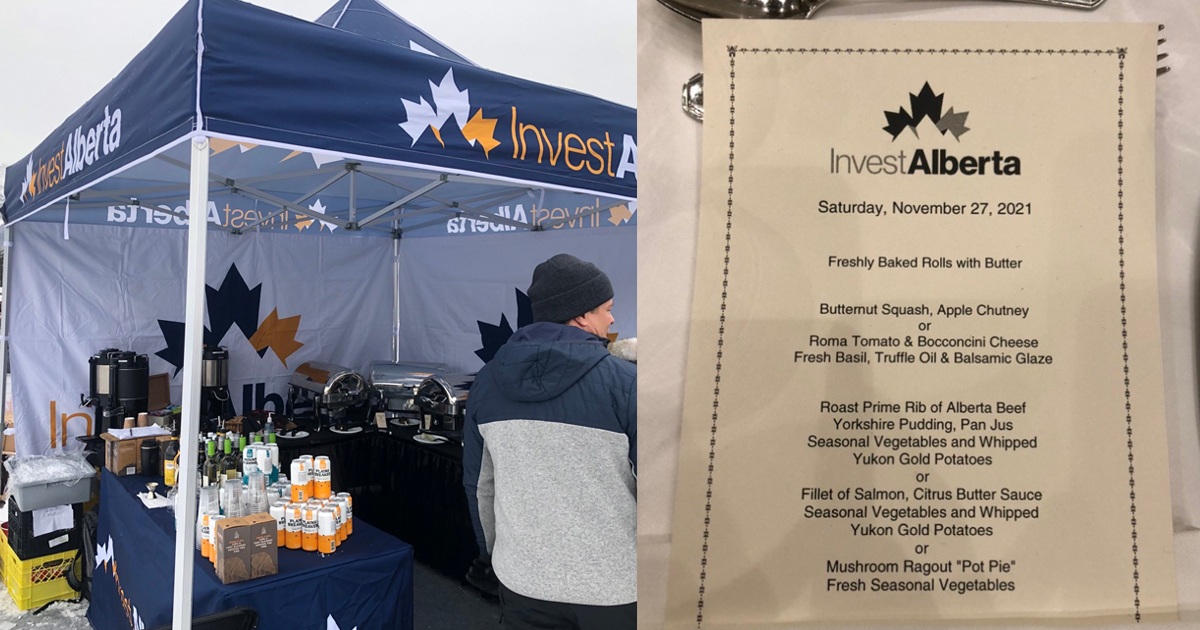 “It’s a layer cake of conflicts of interest. It would amount to a corrupt decision if a provincial government kicked in any money,” said Duff Conacher, the executive director of Democracy Watch, an advocacy group for strengthened democratic governance across Canada.

The UCP created Invest Alberta with Bill 33, or the Alberta Investment Attraction Act, with the stated goal of attracting international energy, agriculture and tourism businesses to the province.

“Creating an Alberta investment agency sends a clear signal to investors in Canada and around the world that Alberta is open for business,” said then-economic trade, tourism and investment minister Tanya Fir.

In September of 2020, Kenney’s former principal secretary David Knight Legg was appointed CEO and given an annual salary of $249,435. Legg was criticized by the NDP Official Opposition in 2019 prior to becoming CEO of Invest Alberta for expensing $45,000 to travel around the world over a period of six months to drum up investment. Legg eventually stepped down as CEO, ten months after starting the job, to shift to a part-time role as advisor to the CEO.

According to a strategic impact assessment submitted to the Canadian Infrastructure Bank, the proposed Calgary-Downtown station for the train project is near the intersection of 1st Avenue and 9th Street SE, which would be within a block of several commercial properties owned by Aspen Properties. Invest Alberta board chair Scott Hutcheson is the co-founder and executive chair of Aspen Properties and the relevant properties include the Calgary Tower, the Calgary Tower Centre, Palliser One, Palliser South and the Edison.

Banff-based businessman Adam Waterous is the co-founder of Liricon Capital, the company behind the Calgary Airport Banff Rail project and he stands to materially benefit if the rail project comes through due to his ownership of the Banff Train Station and Norquay Ski Resort. But Waterous has another connection to this deal: until earlier this year, Adam Waterous sat on the Invest Alberta board of directors.

“We have had countless meetings with the various stakeholders over the last 6 years as we have been spearheading the Calgary Airport – Banff Rail (CABR) project including being invited to attend a recent meeting at Lake Louise with representatives of all 3 levels of government,” said Jan Waterous, co-founder of Liricon Capital and the spouse of Adam Waterous.

This project will be a public private partnership with the Canadian Infrastructure Bank (CIB) and private investors and the bank has commissioned two reports in consultation with Alberta Transportation and Invest Alberta as part of their due diligence for a potential investment by the CIB in the project.

Spotted in the VIP area on the ski hill wearing a Liricon Capital name-tag was Nicholas Hann, the former head of investments at the Canadian Infrastructure Bank who resigned in July 2019 according to the Globe and Mail. Afterwards Hann worked for Invest Alberta as a senior advisor in infrastructure investment and was listed as staff on the Invest Alberta website as recently as May 2021. Hann was also in attendance at the invite-only Calgary Airport - Banff Rail Working Group meeting on Nov. 27 with Jan and Adam Waterous of Liricon Capital. Also in attendance at the meeting were Rajan Sawnhey, the minister of transportation and her chief of staff Ryan Hastman.

Shortly after the meeting at the Fairmont Chateau Lake Louise, Liricon announced they had submitted an updated proposal to Alberta Transportation, Invest Alberta and the Canada Infrastructure Bank to move to the design phase of the project, the final phase before construction.

The updated proposal asks the government of Alberta for what they’re calling a $30 million a year “performance payment” for the next 50 years for a total of $1.5 billion years payable to Liricon once the project is operating. The estimated capital cost of the project is also $1.5 billion.

“The financial math behind the project is simple, but potentially confusing only because [the Calgary Airport - Banff Rail project] is so different from the North American experience of urban mass transit projects and inter-city passenger rail. Virtually all passenger rail projects in North America require a government operating subsidy because their farebox revenue is less than their operating costs. In addition, governments must pay for 100% of capital costs,” said Jan Waterous.

According to a study submitted to the Canadian Infrastructure Bank on July 16, 2021 the annual operating expenses for the rail project are projected to be $30.2 million a year in 2030. 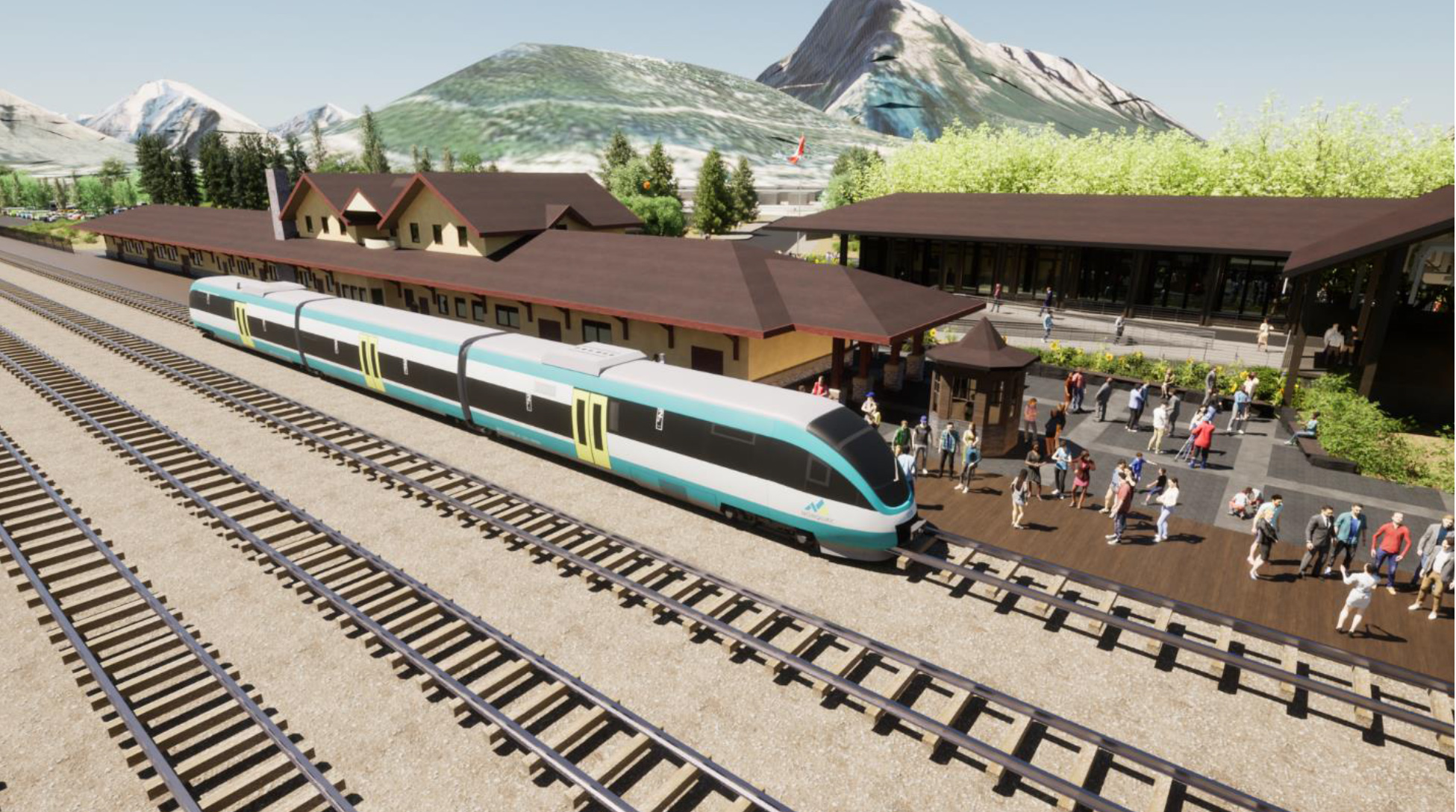 Rendering of the Calgary Airport - Banff Rail project by Liricon Capital. This was Included in their most recent proposal that was sent to the government of Alberta, the Canadian Infrastructure Bank and Invest Alberta.

The briefing note obtained by the Progress Report notes that the project “may fail to garner support from Canadian Pacific Railway if the proposed rail line were to disrupt east-west freight service,” an incredibly important consideration for any passenger rail project that wants to lease track space from a commercial freight rail company. It also has a subheading titled “Conflict of Interest Considerations” which notes several issues—primarily that Adam Waterous, through his holding company, owns both the leases for the Banff Train Station and Norquay Ski Report and that he wants to develop an eco-transit hub at the Banff Train Station. This eco-transit hub proposal includes a gondola which would connect directly to Norquay Ski Resort.

The briefing note is from November 2021 and was made in advance of the meeting hosted by Invest Alberta at the Fairmont Chateau Lake Louise on Nov. 27.

Waterous’ former position as a board member of Invest Alberta, and the organization’s efforts publicly stumping for the project, are also identified as potential conflicts of interest. The briefing note also acknowledges that Waterous has close ties to former Invest Alberta CEO David Knight Legg, though what exactly those ties are is not mentioned.

Adam Waterous’ perceived conflict of interest prompted a review by the Ethics Commissioner who recommended that a recusal would satisfy the ethical requirements of the project, but that a resignation “removes the potential for perceptual issues to arise.”

Adam Waterous resigned from the Invest Alberta board on February 18, 2021.

Invest Alberta and the government of Alberta did not respond to inquiries for comment. When asked about these conflict of interest considerations Jan Waterous said that, “As Adam is no longer part of the Invest Alberta Board of Directors, he cannot comment on behalf of the organization.”

Liricon is hoping to get a final decision on funding from the government of Alberta by early February. On December 8, 2021 Premier Kenney said, "We are not at any point ready to commit to money on this. We have to give this a very close rigour, and that's the stage we're at right now."