No media outlet reported on the release of an investigation by the Alberta Serious Incident Response Team (ASIRT) on the opioid poisoning death of a man in Edmonton Police Service (EPS) custody in late 2018. When something gets released on Friday at 4:30 pm over the Government of Alberta email news alert system, that’s usually the point. But the report deserves more attention, because it reveals something shocking about the EPS.

We do not know the identity of the young man who was killed by opioid poisoning on November 30, 2018. But we do know that his death was not an anomaly. According to ASIRT, since 2016, in Edmonton alone, there have been four other opioid poisoning deaths or suspected opioid poisoning deaths of people who were in police custody. ASIRT’s report thoroughly details the circumstances of this young man’s incarceration, the events leading up to his death, and the steps taken by EPS to try to revive him.

Officers tried cardio-pulmonary resuscitation, a.k.a CPR. They attempted to restart his heart with an automatic defibrillator. But the part that is shocking is what isn’t mentioned: Narcan, or naloxone, the antidote specifically designed to reverse opioid poisonings, an antidote so reliable and well-known that Alberta Health Services gives out free Narcan kits to the public, is not mentioned once. The ASIRT report makes no mention of this common, life-saving product. But the ASIRT report is very clear that the actions of the police officers, “did not constitute a marked departure (failing to provide the necessaries) or a marked and substantial departure (criminal negligence) from the standard of care reasonably expected.”

“It must be exceptionally hard to reconcile that there existed the possibility that the person’s death might have been prevented had the situation unfolded differently, for example, had he been strip searched prior to being placed in the cell or had he been caught in the act of ingesting the drugs. That compounds the tragedy of the death,” reads the report. Yet the report does not mention the single intervention that would have had the greatest chance of saving that young man’s life—simply giving him the antidote. 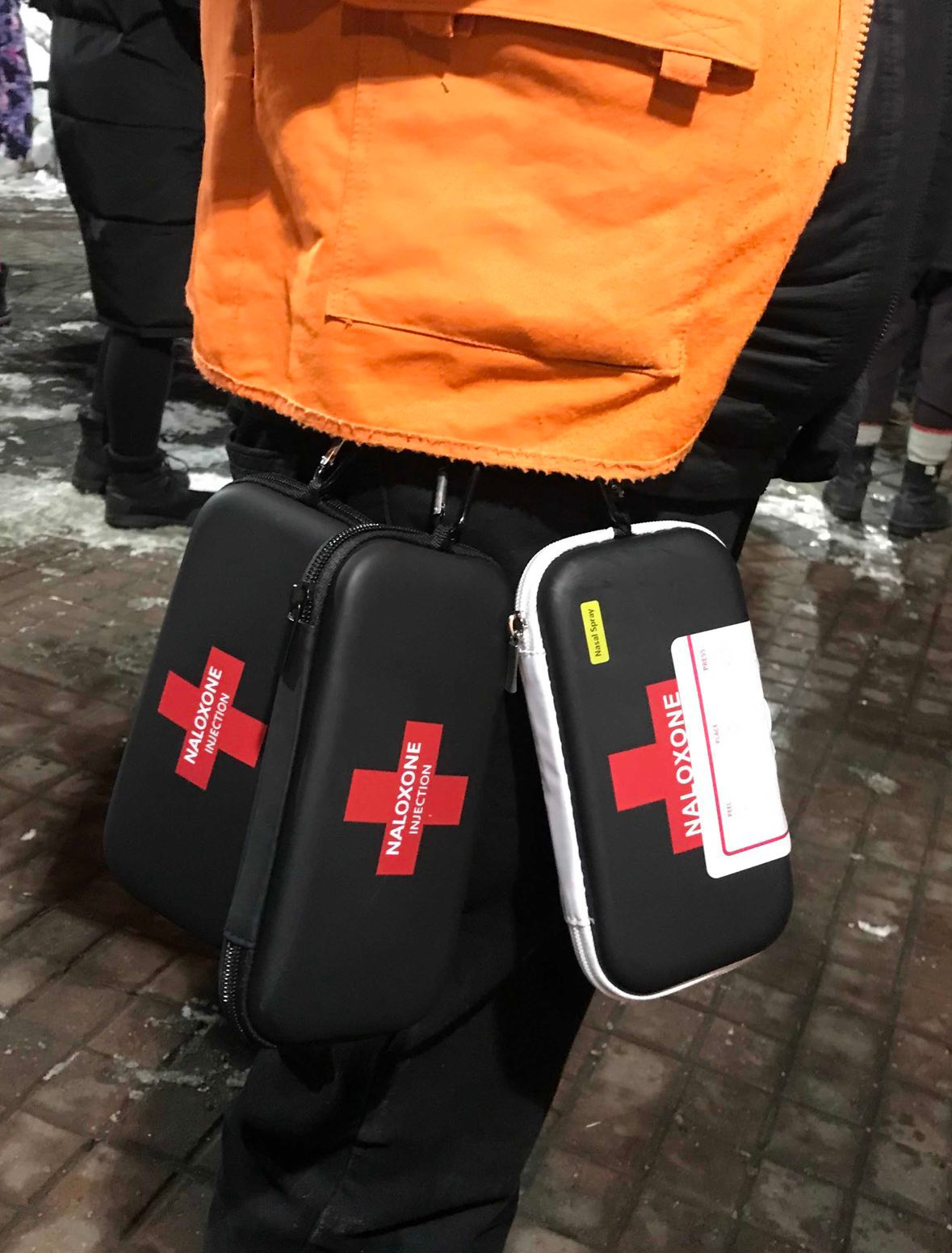 A volunteer with Harm Reduction Support, a local mutual-aid collective, is pictured with several Naloxone kits attached to their belt.

A McMaster and University of Alberta study released earlier this year shows that a substantial portion of frontline EPS officers never carry Narcan at all, despite the opioid poisoning epidemic that continues to rage in and around Edmonton. Officers who took part in the surveys (which took place over 2018-2019) have a deep unfamiliarity with the life-saving drug or how to use it, and many expressed belief in things about opioids that are simply untrue, like the fear that grains of fentanyl touching a person’s skin can poison them and kill them.

The study, titled Narcan and Narcan’t: Implementation factors influencing police officer use of Narcan, was authored by Luca Berardi, Sandra Bucerius, Kevin Haggerty, and Harvey Krahn, and was released in January this year. In the paper, 76 per cent of surveyed EPS officers say they never carry Narcan. In comparison 28 per cent of surveyed members of the Calgary Police Service (CPS) never carry Narcan.

Those who took the survey were nearly all front-line officers, with only one senior officer working in an oversight position interviewed in each city. The study surveyed 54 members from EPS and 40 from CPS.

“There is a lot of stigma against drug users. And people who use drugs that are criminalized have been systematically dehumanized,” said Hilary Agro, a PhD candidate at the University of British Columbia and a researcher on drug use and policy.

“The result is that there is an attitude that people who use drugs that are criminalized are deserving of their fates… that they should accept the consequences of their drug use, which is death. This is not a sentiment that’s unique to police officers, but due to the position that police hold as enforcers of our drug laws, it can be exacerbated by that position.”

“If that is the number of people who are carrying it, that is unacceptable and we’re going to drastically increase that with the help of the province. That is definitely something we can look at,” said McFee.

But according to current EPS policy, refusing to carry Narcan is absolutely acceptable. Even though the province launched a pilot program this summer to ensure officers had access to nasal Narcan spray, which is even easier to administer than Narcan injections, Narcan is still considered an optional piece of equipment for EPS officers.

The study recommends several policy changes to reduce the incidence of opioid poisonings, but its first suggestion is the simplest and most obvious. It should be mandatory for front-line officers to carry Narcan. 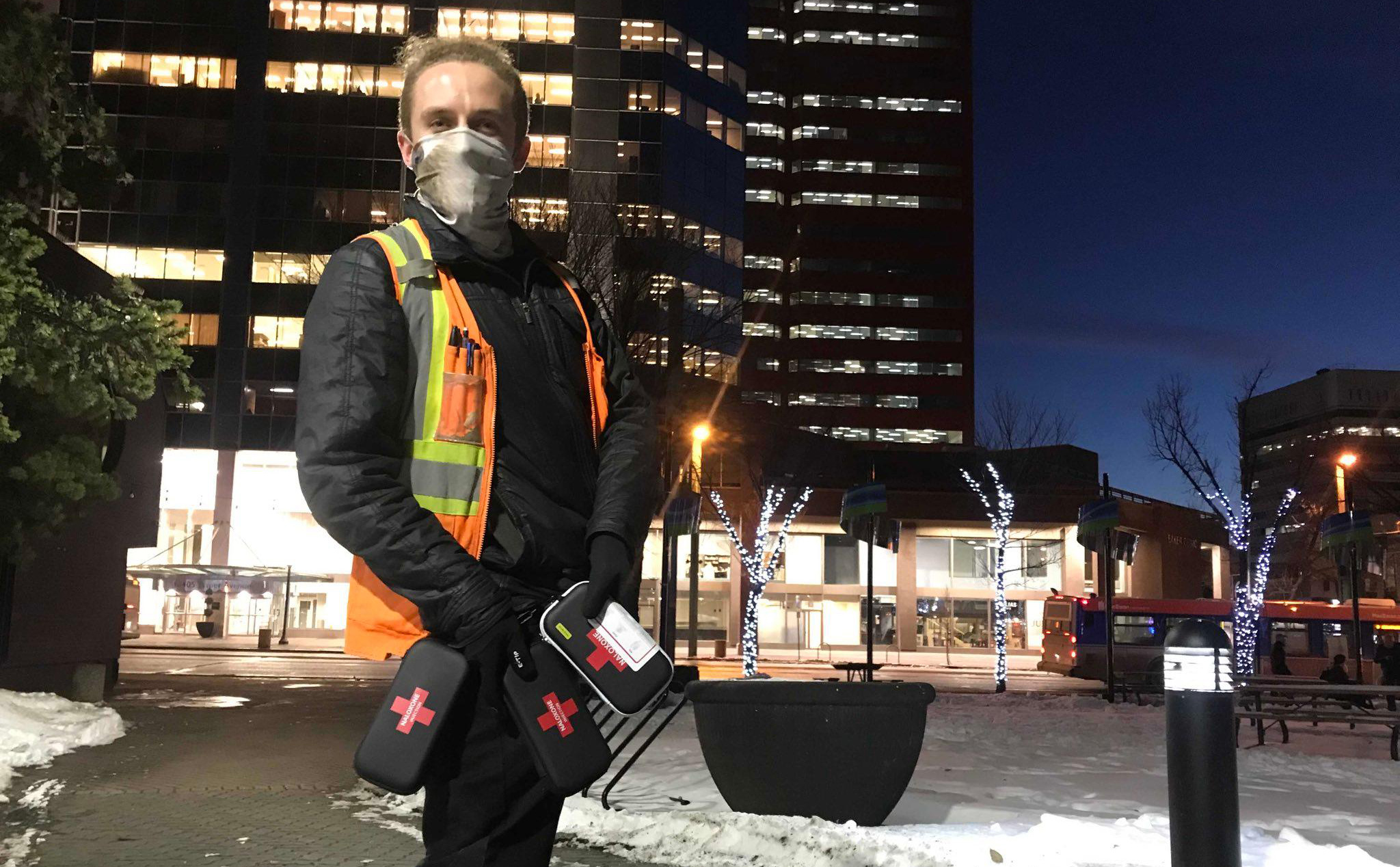 A volunteer with Harm Reduction Support, a mutual aid collective based in Edmonton, is seen pictured with several packages of Narcan.

The study goes on to recommend ongoing training on the use of Narcan, the opioid crisis itself and the signs and symptoms of opioid poisoning. If the lack of knowledge admitted by the officers who were surveyed is representative of the state of EPS as a whole, that education is desperately needed.

Many officers expressed concerns that administering Narcan could leave them legally liable in some way. Others admitted great fear of exposure to Narcan or fentanyl, repeating the myth strangely common among law enforcement officers that having fentanyl or other opioids touch your skin can kill you. The report recommends ongoing training to remind officers that they are free from legal liability as long as the Narcan is administered in good faith, and a review of the scientific literature to remind officers that exposure to small amounts of fentanyl either through the air or on the skin will not lead to poisoning or death.

“Touching or ingesting even a small amount of pure Fentanyl can render a person unconscious and in need of immediate medical attention,” the page reads.

“All it takes is the equivalent of three grains of salt on your skin or tongue to cause respiratory distress,” says Detective Guy Pilon with EPS Drug & Gang Section.

Agro agrees that training and mandating Narcan and training for police is important in the short term but, “the long term solutions are more complex: the main one revolves around providing a safe supply of drugs to people who use them so that people aren’t poisoned by the drugs they use. If people have access to a safe supply of the drugs they use then overdoses are far less likely to happen.”

According to an EPS spokesperson EPS has paramedics working 24/7 in their holding cells. “In the event a medical episode occurs, paramedics are on site to assess the individual and immediately administer naloxone if required,” EPS told the Progress Report, despite the ASIRT report not mentioning the use of naloxone on the man who died on Nov. 30, 2018.

“On the street, EPS members responding to calls involving incidents of overdose will administer naloxone and/or contact EMS paramedics immediately for further medical intervention. Our officers are well trained and often must administer naloxone if no other medical assistance is available. Unfortunately, the reality is that EPS officers respond to multiple incidents of overdose in our city every day.”

But the truly unfortunate reality is that according to this study a massive majority of EPS officers, working in a city that has been wracked by opioid poisoning deaths for the past five years, are simply refusing to carry the cure.

On May 16, 2016 a 47-year old man who was arrested for theft under $5,000 and ​​breaching of his bail died in the downtown holding cells of a fentanyl overdose. Narcan was not mentioned in the ASIRT report.

On Nov. 30, 2018 a 23-year old man was found dead in an EPS holding cell from a fentanyl overdose. This happened after he was taken into custody by EPS after the police removed him from the home of a family member during a dispute where it was alleged that a firearm was brandished. He was arrested and charged with uttering threats and unlawfully dwelling in a house. Narcan is not mentioned in the ASIRT report.

The night of March 15, 2020, a 37-year old man was arrested on an outstanding warrant. The next day, during the afternoon, he was found dead in his EPS holding cell. The on-duty paramedic provided immediate emergency medical care, including CPR and the administration of Narcan and 911 was called. He was pronounced dead at the scene later that afternoon. The ASIRT report is still ongoing.

On June 23, 2020 at about 4 a.m, EPS received a call reporting an individual behaving erratically at a gas station. EPS officers responded, and the 48-year-old man was arrested for public intoxication and transported to EPS Southwest Division station to be held in custody until sober. At about 7 a.m., police found the man unresponsive inside his cell. EMS attended and pronounced the man deceased. The ASIRT report is still ongoing.

On Feb. 5, 2021 at about 7:10 p.m., the Edmonton Police Service (EPS) was called to a disturbance in the area of 60th Street and 35A Avenue. EPS members attended and located the 36-year-old man, who was the subject of the complaint. The man was arrested for public intoxication. A search of the man revealed a prohibited firearm. Following his arrest, the man was transported to EPS Southeast Division station and put in a holding cell at about 8 pm. Records indicate that the man was checked throughout the night.

On Feb. 6, at about 5:55 a.m., an officer opened the man’s cell to provide him a meal, and found him unresponsive in his cell. First aid was conducted and Emergency Medical Services (EMS) were called. Emergency measures were conducted until the man was pronounced dead by EMS at about 6:27 a.m. A small quantity of a substance was recovered from the man’s cell, which tested presumptively positive for methamphetamine and carfentanil. The ASIRT report is still ongoing.